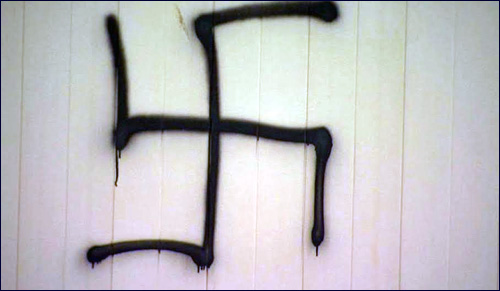 Swastikas painted on the walls in downtown Bologna. A “gas chamber” sign pasted on to a beachside door in Northern Italy. Is Fascism going mainstream again?

When I try to raise awareness of the problem with my fellow compatriots, they seem to dismiss the issue. Doesn’t Italy have bigger problems to worry about, like unemployment, pollution, corruption, the immigration crisis… Why should a few swastikas make you so upset?

Over the last few months, there have been several incidents of alarming fascist propaganda in Italy. The most recent, and disturbing, occurred on a beach in Northern Region of Veneto, which the manager decorated with fascist slogans and pictures, including a door with the sign “gas chamber” on it. He has now been charged. 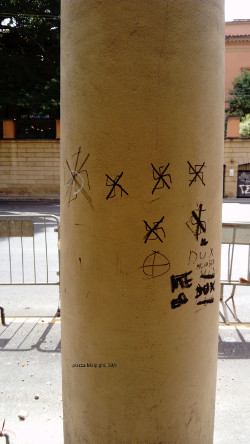 Graffiti on a pillar in Bologna

Mr. Emanuele Fiano, the only Jewish Member of the Italian Parliament and son of an Auschwitz survivor, proposed a law to make it easier to prosecute fascist propaganda crimes on the internet. HIs proposal stirred considerable controversy. Some accused Mr. Fiano of advocating censorship. In the heat of the debate, Mr. Massimo Corsaro, another Member of Parliament, posted on Facebook that Mr. Fiano uses his eyebrows to hide his circumcision. Despite the strong condemnation for this gross, anti-Semitic insult, Mr. Corsaro did not received any penalty neither from the Presidency of the Parliament, nor from his political party of which he is still a full-fledged member.

In Bologna, which was awarded with a golden medal for its Resistance to the Nazis and liberated by the Jewish Brigade of the British Army along with other allies, dozens of swastikas and other fascist slogans and symbols have been painted on the city walls. Some of them have been altered or overpainted by rival gangs, but the Municipality and the Police, as far as I can see, have done nothing to stop this. No official condemnation by any public authority, no interviews in the local papers, no initiative to activate a group to repaint the walls (as has been done in the past to increase awareness of the city’s dignity). 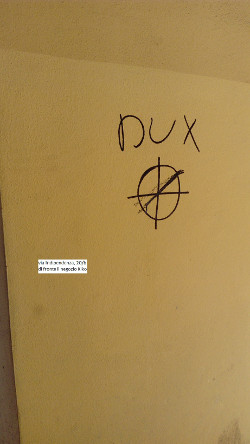 I recently had a letter published by Italy’s most important newspaper about this subject. I received a comment from another well-meaning reader who suggests there’s not much to worry because she didn’t notice more swastikas than usual in town. When did it become usual to see any?

I remember a few months ago someone drew a swastika on the subway in New York City, and hours later another person decided to delete it. The incident went viral and made international news. Am I wrong to expect the same level of commotion in Bologna where I live? Or is it because anti-Semitism in Europe is nothing new, that nobody seems to care if it doesn’t cross some thin line(an explanation another well-meaning person told me)? But where is this line drawn, and who is responsible to draw it?

Is it within the line to find swastikas, or “viva il Duce”, or “Dux” (referring to Mussolini) graffiti just a few steps away from our Synagogue, as well as from the main Police Station, the city main Cathedral, and many public offices? Am I really the only one who thinks this is something serious?

My wife, who is American, is shocked by the situation. I had to explain to her repeatedly, that, no, she can’t just paint them over, because technically it is a petty crime to paint a public wall without permission. I had a much harder time explaining to her why the Municipality and the Police don’t take care or for that matter any notice. Honestly, I can’t really explain it. 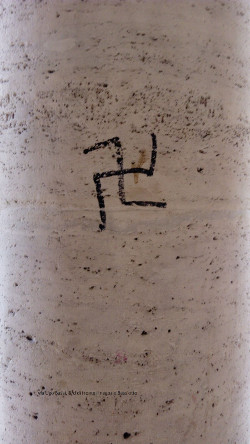 If it becomes socially acceptable again to see such symbols on public walls, which I’m afraid it is, and if the perpetrators are not persecuted, Italy is taking a step back towards its hellish past. Precisely because this anti-Semitism is nothing new, we must always stay alert, especially in Europe. The Region Emilia-Romagna, of which Bologna is the capital, gave birth to Mussolini. Fascism was very strong here; Mussolini was supported both by the working class and by the aristocracy.

True, twenty years later the city was fighting with all its strength to regain freedom and dignity. But during those twenty years the Holocaust and World War II happened. It started with a few youngsters writing and shouting slogans and ended up in being one of the biggest crimes humanity has ever witnessed.

I know, it’s just some graffiti today. But there is no other problem in Italy more serious than this.

Why Not Intermarry?
Don’t Believe in Other Gods Versus God is One
Seeing Without Eyes
Why Shouldn’t We Eat Whatever We Want?
Comments
MOST POPULAR IN Israel
Our privacy policy
Aish.com Is Looking for Great Writers