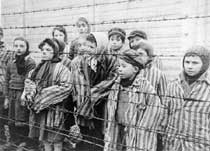 In 1945, the Russian army liberated the Auschwitz concentration camp. The gas chambers of Auschwitz II (Birkenau) were blown up by German troops in November 1944 in an attempt to hide their crimes. In January 1945 the Nazis began to evacuate the facility; most of the prisoners were ordered on a death march, which lasted for weeks in the cold and snow. In the end, some 7,000 people survived Auschwitz; over one million perished.