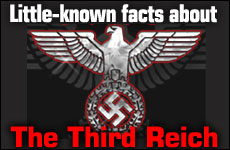 Some lesser-known facts, odd alliances, and daring rescues during the Third Reich.

There is testimony. There are libraries, institutions, memorials, dedications, films, documentaries. Thousands of historians, economists, film-makers, researchers, sociologists, and psychologists have spent lifetimes attempting to make sense of the singular, targeted inhumanity of the Holocaust. And the search for answers will continue. It must continue to not only remember and honor its victims, but through trying to grapple with the incomprehensible -- how a civilized culture fell into in the abyss of evil – there are critical lessons for the future of all who value justice, truth, and the value of a single human life.

Over the course of the last 20 years my own research has turned up some lesser-known facts, odd alliances, and daring rescues during the Third Reich, some you may know, and some may be new. I present them to you now.

“Mischlinge” was the Nazi term for people who did not have full Aryan ancestry according to the Nuremberg Laws. According to Bryan Mark Rigg’s, Hitler's Jewish Soldiers: The Untold Story of Nazi Racial Laws and Men of Jewish Descent in the German Military, as Hitler was moving toward the extermination of Jews, approximately 150,000 mishchlinge, many of them with Jewish blood, served even in the upper echelons of the Germany military via exemptions in Aryan law. Former chancellor Helmut Schmidt, for example, was in the Luftwaffe. Another, was field marshal Erhard Milch.

The question of their knowledge of Hitler’s mission and helplessness is a prominent theme. For example, the mischling soldier who visited Jewish relatives before they were deported to a camp, not knowing then that "deportation" meant death. By 1944, racial purity laws were tightened and many mischlinge died in the camps. Survivors were often rejected by the Jewish community.

In late June, 1999, California’s Huntington Library revealed it had Hitler’s infamous Nuremburg Racial Laws. Yet where was the document for 54 years? In Bloodlines, author Tony Platt explodes the story of General Patton blazing into Nuremburg and finding the papers in a safe. Platt found it was Martin Dannenberg, a Jewish man, who actually unearthed the document.

At age 90, Dannenberg reported that his three-man counter-intelligence team found it in Eichstatt, not Nuremburg, then gave it to Patton’s intelligence chief with the understanding it would be sent to Supreme Headquarters, Allied Expeditionary Force. Instead, it wound up in Patton’s trophy case, then into Huntington’s vault. Platt believes it was not Patton’s anti-Semitism but his desire for glory and loot that led him to grab the document. Subsequently, it was sent to the Skirball Cultural Center in Los Angeles, where the photo of Patton has been replaced in their exhibition with one of a young Dannenberg.

Berlin’s Jewish Hospital remained opened in Nazi Germany, as horror poured down on Europe’s Jews. Staffed by Jews treating Jews, it survived Kristallnacht, the “Final Solution” and remains to this day. This remarkable story is told by Daniel Silver in Refuge in Hell, even as many don’t believe it. Silver himself was dumbstruck when he heard of the hospital’s existence, also known to Adolph Eichmann who overrode orders to close it down. In interviewing survivors, he alleges that under Dr. Walter Lustig (a Prussian Jew), the staff made the "best" of a worsening situation. Once a top Berlin facility, it became a clearinghouse for Jews facing transport to the camps. The Nazis wanted the Jews “healthy” before murdering them. Also, as many patients and staff came from mixed backgrounds the Nazis hesitated to anger “Aryan” relatives. Lustig, part villain, part hero, was shot at war’s end by the Russians.

Dr. Eduard Bloch treated Adolph Hitler’s family during Hitler’s childhood and figured prominently in Adolph’s mother, Klara Hitler’s battle with breast cancer. According to an interview with Dr. Bloch in 1941, at a Nazi party conference in 1937, Hitler inquired as to news of Bloch, referring to him as an “Edlejude” -- a noble Jew. He reportedly stated aloud, “If all Jews were like him, there would be no Jewish question.” In 1938, after Hitler annexed Austria, he assisted in the immigration of Bloch to the U.S.

Trained as a member of the Hitler youth, German Karl Heinz Schneider joined the Nazi air force at age 18, intending to do his duty. Until he saw Nazi storm troopers killing a group of Jews, as a rabbi clutched a Torah tightly as while dying. The true horror of the Nazis revealed, he started to disobey orders and sabotage bombs. Deeply affected by the atrocities, after the war he worked for 20 years as a penance, giving two-thirds of his salary to groups that helped Jewish orphaned survivors. He also began attending synagogue services. After the 20 years, he sold everything and bought a farm in Israel.

Finally, he approached rabbinical authorities in Haifa and asked to be converted. Astonished by his claims, the rabbis investigated. When they verified his story, he was allowed to study and ultimately became Jewish and a citizen of Israel.

A most unusual story is that of Felix Kersten, a Finn of Baltic German origin, who became Heinrich Himmler’s medical “magician,” treating the Nazi’s abdominal problems – and manipulating him into saving thousands of Jewish lives. He not only talked Himmler into refraining from demanding the Finnish government turn Jews over to the Nazis, but arranged a meeting between Himmler and Swedish World Jewish Congress member Norbert Masur. This resulted in Himmler’s agreement to decline Hitler’s order to murder the 60,000 Jews remaining in camps, days before liberation. In 1953, Kersten was granted Swedish citizenship. The Dutch heaped honors upon him including a nomination for a Nobel Peace prize.

One of the most unusual rescues is that of Lubavitcher Rebbe, Joseph Isaac Schneersohn and his family who escaped from Warsaw to the U.S., thanks to German officers Ernest Bloch, a mischlinge, and Admiral Wilhelm Canaris, head of Nazi intelligence. They were assigned the rescue task by Helmut Wohlthat (head of Goring's Four-Year Plan) upon urging of the American Lubavitcher community, and the intervention of the American consul general in Berlin. Despite close calls, the rebbe made it to New York. As for his rescuers, in 1944, Bloch, as all Mischlinges, was dismissed from duty, but stayed to defend Berlin, and was killed in April, 1945. Canaris continued his intelligence work, while helping Jews and opposing Hitler. After an assassination attempt on the Fuhrer, Canaris was convicted of treason and hanged by the SS in April, 1945.

The SS Man and The Jew

1944, St. Julien, France: A surviving victim of Himmler’s SS murderous rampage was Kurt Keiser-Blueth. He was hiding in a haystack. Walter Berndt, the SS man who woke him with his bayonet, was shocked to discover the identity of the hiding Jew.

In Walter's youth, he was Kurt’s best friend, protector and defender of democracy.

“What happened to your love of freedom?” asked Kurt.

“I had to choose between freedom and security. I chose security, for myself and for my nation.”

Kurt turned pale. “Deliver me to the other murderers. This is your duty.”

He offered his hand to Kurt who refused to take it. Walter went outside and told his comrades, “There’s no one here. ... Let’s go.”

A country isn’t a rock, and it isn’t an extension of one’s self. It’s what it stands for, when standing for something is the most difficult. Before the people of the world, let it now be noted in our decision here that this is what we stand for: Justice, Truth. and the value of a single human being. Excerpted from Judgment at Nuremberg