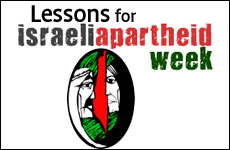 One aim is to make people viscerally, passionately, angry at Israel, and in this respect the theatrics seem to work. At a London campus last year, a political argument devolved into fighting, when a Jewish student was bitten on the face by an Apartheid Week organizer.

"This is about the number of Palestinians being murdered," reads the description of Israel Apartheid Week at the University of Illinois. Ergo, if Israel is such a brutal place, people should shun it. Boycott Israel, divest from it, and batter it with sanctions. This so-called "BDS" movement is the take-home instruction of every Israel Apartheid Week.

Since I care deeply about human rights, I decided to take this call seriously. But I decided to go a step further; after all, why focus only on Israel? “Starting tomorrow morning, I will use only products made in countries with strong human rights records,” I announced.

I awoke, rubbed the sleep from my eyes, and picked up my first consumer item of the day: my toothbrush. Made in China.

Ah, China, where opposition parties are banned and critics of the government are imprisoned. China, where the “one-child law” is enforced with jail, fines, even forced abortions. China, which violently suppresses any expression of Tibetan political aspirations. No free press. No Internet freedom. No free trials. It’s government that Human Rights Watch called an "unreformed authoritarian system."

I couldn't use this toothbrush, and went hunting for another.

Okay, I couldn't use this toothbrush, and went hunting for another. Finally, in the back of a cabinet, I found a spare. Eagerly I took it down and read the handle. Thailand – where the laws of lese magesy (not criticizing the monarchy) are so strong that a reporter was jailed for 13 years for criticizing the king on a website.

Reluctantly, I put the toothbrush back, and opted for a natural alternative: baking soda.

Next, I went to find something to wear, and pulled on my favorite shirt: made in Bangladesh. Hmm. According to Amnesty International, the Bangladeshi Special Police Force has been involved in over 700 extrajudicial killings since its formation in 2005.

Alright, let’s try another shirt: made in El Salvador. That wouldn't do; there, human rights workers and independent journalists are attacked, even killed, with government forces either complicit or turning a blind eye.

A third shirt was made in Ukraine. Forget it: according to the U.S. State Department, suspects are routinely tortured by police.

I was running out of things to wear. Aha – my one sweater from France! Surely a western European country like France must be ethical. Maybe not. Unlike other countries (such as Israel, where Muslims enjoy freedom of religion), France tramples on the religious rights of its large Muslim minority, banning headscarves in schools and making Muslim face veils illegal. Its police also face charges of reacting with heavy-handed brutality to unrest in heavily Muslim neighborhoods.

Completely flummoxed (and still in my robe), I went into the kitchen for a cup of coffee. No dice. I had a choice of Ethiopian blend (Ethiopia, where one-party rule is maintained through widespread election fraud and violence, as well as the arrest of opposition leaders) or Columbian (where President Uribe's paramilitaries carry out brutal human rights abuses against the secessionist FARC terrorists hiding in Columbia's northern region).

Tea? Nope. My choices there were Chinese (see above) or Indian – a democracy where government forces engage in extrajudicial killings and torture of police suspects.

I drank a glass of water instead (that’s safe, right?), and headed out to drive carpool. Oh no! It's hard to tell where the gasoline in my car is from, but almost all of the major oil-producing countries in the world have horrendous human rights records.

What about the gender apartheid and religious apartheid laws in Saudi Arabia?

Saudi Arabia, the world's largest oil producer, is ruled by absolute monarch King Abdullah. All forms of political opposition are barred (opposition figures are routinely arrested and tortured), and the country recently instituted even more draconian laws against political speech. Gender apartheid laws prevent women from the right to drive or vote, Religious apartheid laws mean that certain roads and even entire cities are off-limits to non-Muslims; Christians are barred from practicing their religion, and Jews aren't even allowed into the country.

The world's second-largest oil producer is Russia, where opposition leaders and journalists have been murdered by killers linked to the government, where Prime Minister Putin and President Medved have consolidated power and intimidated opposition, and where the government is fighting several breakaway republics amid grotesque human rights violations.

Then there’s oil from Iran, where political protest is brutally silenced, and which – under the rule of Holocaust-denying, let’s-wipe-Israel-off-the-map President Mahmoud Ahmadinejad – is racing to develop nuclear weapons in the face of international sanctions.

The world's sixth-largest oil producer, Venezuela, is ruled by strongman Hugo Chavez, who has rewritten the constitution to guarantee his dominance. Venezuela, where extrajudicial killings by security agents are common, where armed gangs control the prisons, and where critics of the government are targeted for criminal prosecution.

I told the kids: “Maybe we’ll plan out a bike route to school from now on. But for today, back in the house.”

It wasn't even eight o'clock and I was exhausted. I went over to the bookshelf and took down my siddur (prayer book) which I had bought in Israel.

Uh oh. Can I use it? I quickly looked up the U.S. State Department’s annual Human Rights Report.

I opened my siddur, wondering if someone could explain to me exactly what is the reason for Israel Apartheid Week…?