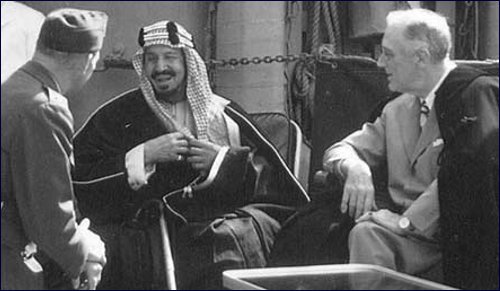 FDR did not support the creation of Israel. Destiny had other plans.

This week we commemorate the 67th anniversary of the birth of the modern day state of Israel. This momentous event almost didn’t take place without very special divine intervention.

At the time almost no one knew the story. It was not until much later that the secret correspondence between Franklin Delano Roosevelt and the Saudi King surfaced. But now we know what transpired behind the scene that would surely have derailed recognition of Israel as a member state of the United Nations – and we can once again stand in awe of the mysterious ways in which God plays a role in directing the turning points of history.

I have just now become privileged to see copies of the original letters between Abdul Aziz bin Abdur Rahman al Faisal al Saud and the then president of the United States. It was in March 1945 that the Saudi King, aware of the imminent end of the Second World War, wrote to FDR of his fear that the Jewish remnant of the Holocaust might push for a return to their ancient homeland of Palestine. Saud was particularly concerned that there might be some American support for this on humanitarian grounds, especially in light of the revelations about the extent of Jewish suffering.

The Saudi King was undiplomatically direct in his opposition to this possibility:

“This right [of the Arabs] men now seek to destroy by injustice unparalleled and unequaled in history. Such is the right of the Arabs in Palestine which the spokesmen of Jewish Zionism wish to scorn and abolish by the use of various forms of lying propaganda, invented, concealed and employed by them throughout the world.… They are preparing to create a form of Nazi fascism within sight and hearing of the democracies and in the midst of the Arab countries as well as in their very heart and in the heart of the East which has proved itself loyal to the Allied cause in these critical times….. We state frankly and plainly that to help Zionism in Palestine not only means to endanger Palestine but all neighboring countries.”

Leaving aside the incredible reference to the Arab world having proven itself “loyal to the Allied cause” in spite of its powerful links to Hitler and the Nazis, the Saudi King seemed quite confident he would secure a positive response from FDR which would make the creation of a Jewish state impossible.

In fact he was not disappointed.

On April 5, FDR responded with an extremely warm note. In it he offered the king a firm commitment.

“Your Majesty will doubtless recall that on previous occasions I communicated to you that I would take no action in my capacity as chief of the executive branch of this government which might prove hostile to the Arab people.”

As long as he continued to serve as President, he made clear that the dream of the Jewish people of return to their homeland would not be fulfilled. Those were his words.

It was on April 12, a mere seven days after the date of FDR’s commitment to the Saudi King, that FDR passed away.

America mourned mightily at the death of their leader who had guided them through the previous years of horror. Jews, as grateful citizens of a land that had offered them so many blessings, were in the forefront of those overwhelmed by grief. We can now see divine fingerprints in the replacement of FDR with Harry S Truman, a man who previously enjoyed a friendly business relationship with a Jew and found himself in the unique position of being able to make possible the creation of the state of Israel which his predecessor pledged never to allow.

It seems miracles have always played a major role in the unparalleled story of a people returning to their homeland after a hiatus of close to 2000 years. But it was not only the miracles which allowed Israel to survive the attacks of its many enemies, far superior in number, in armaments, in wealth and in friends amongst the nations of the world. No rational historian, no realistic military analyst, no cogent political commentator could possibly have predicted that after 67 years of attempts at its annihilation, Israel still stands proud and tall, secure in its achievements and confident of its continued survival.

Israel’s development through its teenage years, its growth to maturity and its present day place in the world as a technological wonder all bear the signs of divine and miraculous assistance. However this year, now that we know the full story, let us add our recognition of the miracle which made possible Israel’s birth as well.

Martin Luther's Reformation and Antisemitism
Lessons from the Book of Jonah
Where Are We? The Body, Brain, Soul Problem
Dr. Sheila Nazarian’s Escape from Iran
Comments
MOST POPULAR IN Israel
Our privacy policy
Aish.com Is Looking for Great Writers