I Guess I’m Not Okay 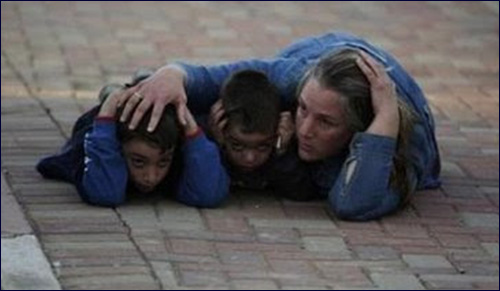 In an instant the traumatizing reality of the war came crashing down on me.

Last night I lost it.

It's been a long time since I felt helpless, panicked, visceral fear. The last time was about seven years ago when I was running down my street, holding my 1-year-old convulsing daughter in my arms, screaming "help me" in a voice that might have been inaudible because no one heard my cries. I remember getting to my neighbor's house, a doctor whom my son had ran to call, passing my daughter to him and then sitting down quickly on the steps before I involuntarily collapsed. I curled up with my head in my hands, gently rocking myself until he came out to tell me, it's okay, she's breathing. And only then did my tears start to flow.

Last night was the same sort of traumatizing reality, as the war, in an instant, became personal and tangible and even more horrifying and terrifying.

It was Friday night. In our small town, our neighborhood is closed off on the Sabbath, which means that parents feel safe having their kids play in the park next to the synagogue or in the vicinity of the synagogue. We haven't had very many red alerts by us, so parents didn't think twice about letting their children play outside while they prayed.

I don't know why, but that night I decided to walk up to the synagogue to meet my husband and walk home with him. I left my 17-year-old daughter at home and left the house to get some fresh air.

I was outside the synagogue talking to people waiting for services to end. As people started exiting, an unfamiliar sound cut through the peaceful tranquility.

It took me a second or two to realize that the loud, piercing sound was a seemingly endless siren and in a panic, I suddenly realized that I didn't know where my 8-year-old daughter was. Within seconds of the start of the siren, there was a pack of kids of all ages running like a herd down the street towards the synagogue, their parents and the illusion of safety. Little kids were helping littler kids over the small wall at the park. There were tears in the eyes of some of the smallest kids, and comforting words being given by the slightly older kids. It was heart-wrenching to see how these little kids behaved, as if running from a siren was second nature to them.

And I ran against the pack, not towards safety, but towards the park, trying to find my daughter. I did a silent inventory. My husband was in the synagogue, my eldest son was away for the weekend, my second son was in the army, I knew my older daughter was at home and I was sure she went into our safe room. I passed my 15-year-old son, who was running to safety, but I did not find my 8-year-old daughter.

As I stood in the middle of the street all by myself in the silence of the siren, a neighbor beckoned to me to come stand with her and others in a covered yet open concrete car garage. I did. Had she not called to me, I would have probably stayed rooted to the spot, paralyzed.

As I crouched there with about 10 others, I was thankful that it was dark and that no one could see that I was on the verge of tears. And when I saw two Iron Dome missiles being fired and the subsequent delayed really loud four booms, something broke inside of me.

I waited until it was safe and tried to find my husband and daughter in the masses of people. I found him holding my daughter by her hand.

"I ran to the park looking for Noa," I said with a broken voice.

"Why did you do that? She knows exactly where she has to go and what to do if there is siren." It was said to me, but it was mostly for her benefit, for her to hear how responsible she is and that there's nothing to fear because she knows how to protect herself.

"I didn't know where she was." I replied, trying to keep my voice steady so as not to scare her.

My husband turned to talk to someone as I took my daughter by the hand.

"I'm going home." I said. He started to question why until he saw the look on my face and realized that any additional words would end with me bursting into tears and causing an embarrassing and unwanted scene, both for myself and my daughter.

I plastered a fake smile on my face and maneuvered through the hordes of people, politely wishing friends and acquaintances a Shabbat Shalom as I passed them. I held my daughter's hand tightly as she related to me how she ran to the shelter, how everyone was squeezed in like sardines and how she shook in fear when the siren went off.

I got home, said hello to my daughter and my friend who was eating dinner by us, then excused myself for a few minutes. I went to my room and cried, but only a little bit. I had to stop myself because for my children's sake, I couldn't go back out with puffy, red eyes. I had to be strong for them so that they wouldn't be afraid.

Now I just feel unnerved. I have to somehow come to grips with something that is every parent's hopeless grail -- protecting their kids. In everyday life, even without a war going on, I know how limited I am in my quest to protect my children. I can't protect them. Not at home, not in school, not when they are in the army and not at the synagogue.

And now I feel even greater despair and impotence. How can I protect them?

Do the perpetrators of hate even care that I'm a person who believes in getting to know a person for who they are and that I try my best not to judge a person by the group they belong? That I try to give people the benefit of the doubt? That I don't want revenge, I only want to live in safety and peace?

Do they care that I treat their countrymen who come to me for medical care with the same kindness I treat my own people? Do they care that I hurt for every innocent civilian loss they face because I know their children are growing up as traumatized as our children living in the south who go through multiple times daily what I went through last night?

Hamas doesn't care because they are blinded by a hate that seems to have no cure. They have as little respect for their own countrymen as they have for their enemies.

Aren't you sick yet of living in fear and conflict? I sure as hell am.

And no, I'm not okay. Thanks for asking.

Susie (Newday) Mayerfeld is a happily-married American-born Israeli mother of five. She is an oncology nurse, blogger and avid amauter photographer. Mostly she just wants to live in peace and spread kindness and love. You can find her on her blog New Day New Lesson or on World Moms Blog.

How to Foster Gratitude in Children

7 Rosh Hashanah Projects to Do at Home with Your Kids

I'm Bored! How to Stop being Responsible to Entertain Your Kids and Encourage Them to Do It Themselves
Megillah Gorilla Saves the Day
Challah Reuben “Grinder”
Big OnThe Little Things
Comments
MOST POPULAR IN Family
Our privacy policy
Aish.com Is Looking for Great Writers