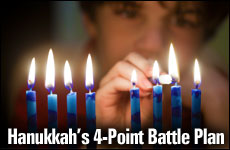 The Maccabees’ eternal lessons for preserving Jewish continuity and pride.

What is the formula for a healthy Jewish future? What should the community be doing to insure Jewish continuity? What choices can we make to ensure that our grandchildren will be Jewish?

Millions of dollars are being poured into research and programs to find the answers, to come up with the right formula. Even as the search goes on for the magic bullet that will end assimilation's toll, we light our Hanukkah candles and wonder: Will the next generation celebrate Hanukkah or Christmas?

Why is it that people tend to look everywhere but in their own backyard? The past is the foundation of our future. A detailed blueprint for guaranteeing Jewish continuity was established long ago: The holiday of Hanukkah!

The Maccabees were the first Jews to be forced to come to grips with the phenomenon of communal assimilation. The Hellenists – Jews who embraced Greek culture – aided and abetted the Syrian-Greeks in their battle to destroy Judaism and turn the Holy Temple in Jerusalem into a place of Greek idol worship.

The Maccabees stood firm against incredible odds – defeating the Syrian-Greeks and rededicating the Temple.

Had the Hellenists won, the result would have been no more Judaism.

Imagine if the Hellenists and Syrian-Greeks had won, defeating the Maccabees and imposing their pagan worldview upon the Jews. The result: No more Judaism. (There would have been no Christianity or Islam, for that matter, as they are both offshoots of Judaism from the post-Greek period.)

After the Hanukkah victory and miracle of the oil, the Jewish leaders of that time formalized the commemoration of the miracle of lights. They created an everlasting lesson and inspiration that would preserve Jewish identity in the coming generations – and serve as the formula for igniting Jewish continuity today.

The laws of Hanukkah mandate the lighting of a menorah in every single Jewish home. Jewish continuity is about having a home that is actively Jewish. The impact on our children of seeing the Shabbat candles, tasting of challah, crunching the matzah, and, of course, the glow of the Hanukkah candles, leave valuable impressions and positive connections that last a lifetime.

The candles are lit where everyone can see them, usually in a window facing the street. No shame. No hiding our identities. The glowing lights of the Hanukkah menorah announces to the world that “Here lives a Jewish family, proud of their Jewish heritage.”

I recall the historic signing of the Camp David peace accords with Egypt. . When it was Israeli Prime Minister Menachem Begin's turn to speak, he carefully placed a kippah on his head and – in front of the television cameras and the entire world – recited one of King David's psalms. How about El Al's no flight policy on Shabbat or Adam Sandler's priceless Hanukkah song. Open and blatant Jewish pride.

You don't have to be a world leader or celebrity to announce to others (especially your children, who are quietly watching our every move!) that we are proud to be Jewish. Every Jewish family lighting candles in their windows affirms that idea.

The Hebrew word Hanukkah is from the same root as chinuch, education. A critical component of the Maccabean plan for Jewish continuity is to illuminate our Jewish lives with Torah wisdom and knowledge.

All members of the household, young and old, are encouraged to light their own individual menorahs. Each one does his or her part by adding another candle and more light – i.e. increasing their own Jewish knowledge – each night of Hanukkah.

The Hanukkah menorah is a memento of the seven-branched golden menorah that stood in the Holy Temple in Jerusalem. Wherever our menorahs cast their light, in all the lands that Jews have wandered, we connect with Jerusalem and Israel as our homeland.

The dreidel is a toy, but it too carries this message. The Hebrew letters on the dreidel stand for a Hebrew sentence, Nes gadol hayah sham, "A great miracle happened there" – Jerusalem.

Our love and support of the Land of Israel give our children a clear and tangible way to bond with their Jewish identity.

The war against the Hellenists and the Syrian-Greeks wasn't easy. Today’s battle for Jewish continuity is not easy, either. Let us use Hanukkah's four-point battle plan and encourage Jewish action, Jewish pride, Jewish education and a strong connection to Israel.

In the struggle to maintain Jewish continuity, we peer into the Hanukkah candles and see a brighter future.

Why We Celebrate Hanukkah with Light
For Every Individual, A Torah Scroll
Allegiance To The Monarch
Meet the Real You: Yom Kippur
Comments
MOST POPULAR IN Israel
Our privacy policy
Aish.com Is Looking for Great Writers