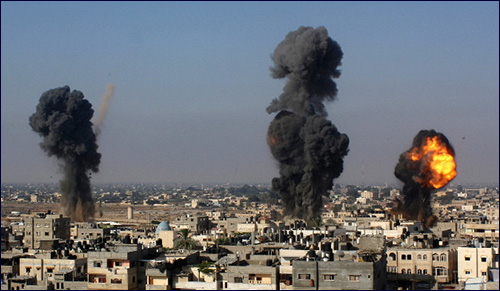 Hamas’ dead baby strategy works because the media facilitates it.

The media loves to count the dead bodies on each side of a conflict. It’s much easier to count that to explain. Hamas knows this. That’s why they employ what has come to be known as “the dead baby strategy”.

Here’s the way it works: Hamas deliberately fires its rockets from densely populated civilian areas, using hospitals, disability centers, mosques and schools as launching sites. This puts Israel to the tragic choice of either allowing the rockets to endanger its civilians or to destroy the rocket launchers, thereby risking civilian casualties among Hamas’ human shields. Often Israel chooses to forgo attacking military targets, so as not to put Palestinian civilians at risk. Sometimes it has no choice, because the rocket fire against its civilians is persistent. Palestinian civilians are killed despite Israel’s best efforts precisely because Hamas wants civilians to be killed, especially if these civilians are children, women or the elderly. Hamas stands ready to parade these human shields in front of the media which is eager to show the dead and count the bodies.

Hamas could easily reduce the death and injury toll among its civilians by allowing them to go underground into tunnels and shelters which abound throughout Gaza.

Hamas could easily reduce the death and injury toll among its civilians by simply allowing them to go underground into tunnels and shelters which abound throughout Gaza. But Hamas has a deliberate policy of refusing to allow civilians to enter the tunnels or shelters. They reserve these places of refuge for their fighters and commanders, which explains why so few Hamas fighters have been killed. If Hamas were to reverse its policy and allow civilians into the shelters while requiring its fighters to stay above ground, the ratio of civilians to fighters killed would dramatically change. That is why in each of the wars between Hamas and Israel there have been more Palestinian than Israeli civilian deaths and injuries. It is part of Hamas’ dead baby strategy and it works, because the media facilitates it.
The media also emphasizes the fact that thus far no Israelis have been killed by Hamas rocket fire. Indeed some media and international organizations seem implicitly to be condemning Israel for protecting the lives of its own citizens, by repeatedly pointing out there has been only one fatality, while Palestinian deaths have reached over 200. The reason there has been only one Israeli death so far is because Israel spends hundreds of millions of dollars trying to protect its civilians, while Hamas spends its resources deliberately exposing its civilians to the risks of Israeli counterattacks. Israel has built shelters all throughout the country and has spent a fortune on the Iron Dome system. The results have been impressive, though many Israelis suffer from trauma, shock and the inevitable long term consequences of being exposed to constant rocket fire.

How many times have you heard, seen or read the body counts: nearly 200 Palestinians dead, no Israelis dead. This is usually accompanied by an accusation that Israel is violating the international law requirement of “proportionality.” This is a misuse of the term, which has a precise meaning in international law that reflects a broader morality. Under international law, a nation has the right to attack military targets. Period! It doesn’t matter whether the rockets coming from these launchers have as yet succeeded in their task of killing civilians. There can be no doubt under international law that rocket launchers, and the fighters who employ them are legitimate military targets. Israel is therefore entitled to attack these targets, even if no Israeli civilians have been killed, so long as it can do so without causing disproportionate civilian casualties.

This rule was not addressed to an enemy that deliberately uses human shields to protect its military targets and combatants against legitimate attacks. Proportionality is not judged by the number of civilians actually killed by Hamas rockets, but rather by the risks posed to Israelis. These risks have been diminished, but not eliminated by the Iron Dome system. They have also been considerably diminished by Israel’s counterattacks on the missile launchers and those who employ them. Without these counterattacks, it is highly likely that more Hamas missiles would have made it through the Iron Dome system which has been approximately 85% effective. Israel has every right under the rules of proportionality to attack these military targets, so long as they take reasonable efforts to reduce civilian casualties. They have done so by leafleting, by calling, and by other methods of warning civilians to leave target areas. Hamas leaders, on the other hand, have urged, and sometimes compelled, their civilians to remain in harm’s way as human shields.

The media, by emphasizing the comparative body counts without providing the reasons for the disparity, play into the hands of Hamas, and encourage that terrorist organization, to continue to pursue its dead baby strategy. So the next time those in the media promote a body count without explanation, they should point a finger at themselves for contributing to this deadly count.

Six Days, Countless Ramifications
The Blue Beyond
Great Place to Live
Is Eating Supposed To Be Spiritual?
Comments
MOST POPULAR IN Israel
Our privacy policy