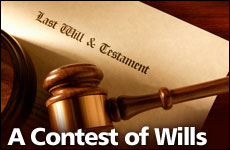 Sure it's legal, but is it right?

As an attorney, I sometimes get calls from friends and acquaintances, asking for my legal opinion on personal or business matters. Usually, the questions are fairly simple, and lend themselves to a quick response. So when my friend, "Marcia," called me with questions about her mother, I was happy to render advice.

Marcia's mother, at the time of the first call, was a widow aged 72, who was making plans to remarry. Marcia and her family were ecstatic about the plans; her mother's fiancé was, in fact, the widowed father of Marcia's best friend, "Jill." Marcia and Jill grew up as neighbors and were as close as sisters; they were delighted to soon become actual step-sisters.

Marcia's mother, Sarah, had been widowed for several years, and was essentially subsisting on her Social Security income, although she also had some interest income and had no difficulty making ends meet. Jill's father, Sam, on the other hand, had been a highly successful businessman, and in retirement, was comfortably living off of the proceeds of his large investment portfolio. Sarah made it clear, however, that she was not marrying Sam for personal gain, but rather companionship.

As this was to be a second marriage for two elderly grandparents, a simple wedding was planned in the local synagogue, attended only by the children and grandchildren. I received the first call from Marcia two weeks before the wedding. She was furious and could barely get the facts out.

Unless she signed the pre-nup, the wedding was off.

"My mother just returned from an impromptu meeting with Sam and his lawyer, holding a signed pre-nuptial agreement in her hands! She had no idea what the papers said, but was informed that unless she signed it, the wedding was off! So she went ahead and signed it. Now what should we do?"

I knew that Sarah was a European immigrant and not fully literate in English. So I understood why she was unable to read the document. But I was still puzzled.

"Marcia, wasn't your mother's own lawyer present when she signed it?"

"No! What lawyer? She has no lawyer, and had no chance to find one. I didn't know anything about this pre-nup myself until she came home with the papers. Is it legal?"

"Well, if you mean is it binding on her, the simple answer is no. Since she wasn't represented by her own lawyer, it's not a valid agreement. And besides that, there may be issues of duress, especially considering her illiteracy. But what does the pre-nup actually say?"

Marcia read the short document to me over the phone. Essentially, her mother had agreed to waive her "Right of Election" should Sam pre-decease her. In the State of New York, a widow can elect to inherit one-third of the estate of her deceased husband.

Marcia became even more agitated. "So he's planning to write her out of his will?"

I sighed aloud, imagining how easily this long and amicable relationship between the two families could be destroyed. "Sam might just have been following the instructions of his attorney. But let's talk about the big picture first, before we consider your mom's legal rights."

Sam was about 80 years old and had been treated for lymphoma a few years earlier, though it had been in remission. "Your mom is eight years younger than Sam, and in good health," I said to Marcia. "The odds are that she'll outlive him. If your mom were to inherit a third of his estate, you know she wouldn't be spending it on cruises or luxury items. That's not the type of person she is. It would end up in her estate, and you and your brother would inherit it, rather than Jill and her sisters. Is that really the right outcome? Do you think your family should inherit part of the estate, instead of Jill and her sisters? How would you feel if the situation was reversed?"

Marcia remained quiet for a few moments. Then I heard a long sigh. "I see what you mean. But he did it in such an underhanded way! Why'd he have to be so sneaky about it?"

"He shouldn't have been; I understand why you're upset. But the question now is how are YOU going to behave?"

"Are you saying I shouldn't do anything?"

"I wouldn't tell you what to do, Marcia, but if you're asking about your legal options, you – or should I say your mother – has several to choose from. Your mother could hire a lawyer, and renegotiate the pre-nup before the marriage takes place. Or she could do nothing now, go ahead with the marriage, and if your mother does outlive Sam, she could then contest the will, and argue in court that the pre-nup is not binding. Or she could just accept the terms of the pre-nup and the will. What do you think your mother will want to do?"

"I'll ask her, but I suspect she'll do nothing. She just wants his companionship."

As it turned out, Marcia's mother did choose to leave the pre-nuptial agreement undisturbed, and the marriage proceeded as planned. Three years later, Sam was diagnosed with a recurrence of his cancer, and he passed away several months afterward. It was during Shiva that Marcia called me early one morning for more advice.

"You're not going to believe this! Jill arrived with another legal document for my mother to sign. She must have stopped off at the lawyer's office on her way here! The document states that my mother agrees not to contest the will. How could she do this – right in the middle of Shiva?!"

Oh dear, I thought. Here we go again. "Marcia, your mother thought this through almost four years ago, before she married Sam. Has she changed her mind? I would guess that the attorney handling Sam’s will is probably working on getting it through probate, and wants to get the estate settled as soon as possible. Is it a good idea to bring it up during Shiva? Not really. But Jill is probably just following the lawyer's instructions, just as her father did with the pre-nup."

"Why didn't she just talk to me about it first?"

"I don't know. Is it possible she's embarrassed about the whole situation, and feels as awkward about it as you do? And she is surely distraught that her beloved father has just died. How would you feel in her place?"

"So what are you saying – that my mother should sign the document?"

You and Jill will become adversaries in court, and your lifelong friendship will undoubtedly be destroyed.

"Marcia, I wouldn't presume to tell your mother what to do. She can decide to contest the will, given that she doesn’t know its contents. Your mother may well prevail in court, and could end up with a third of Sam's estate. But if she does choose that option, you and Jill will become adversaries in court, and your lifelong friendship will undoubtedly be destroyed. So what do you think your mother should do, Marcia?"

There was such a long pause that I thought Marcia had hung up. "Marcia, are you still there?"

"Yes, I'm here, and I'm sure that some people will think I'm not 'all here.' But I'm going to tell my mother to sign that document. If my mother was younger, and I believed she would make use of that money, I might act differently. But Jill is my best friend, and I do love her like a sister. I don't want to feel like I'm taking what really belongs to her and her family."

In the end, Marcia did take the high road, and Sam's will went through probate uneventfully, with his three children inheriting the bulk of his estate. His will did create a trust fund for Marcia's mother, from which her rental expenses and utilities were to be paid as long as she lives. Sarah also applied for, and received, an increase to her Social Security benefits as Sam's widow. Sarah is perfectly content with this outcome, and her only sorrow is that she has lost her second husband, whose company she cherished.

But more importantly, Marcia and Jill -- and their families -- remain close friends. In fact, they have become closer than ever. Of course, Marcia first had to work on overcoming her anger about Jill's behavior regarding her father's estate. She managed that by doing what everyone is supposed to do when confronted with problematic behavior by another: give the other person the benefit of the doubt, and assume that there is an acceptable explanation for his behavior within the particular circumstances. In other words, treat the other person the same way you'd want to be treated yourself.

What this episode proved to me once again was that in a contest between friendship and money, and between taking the legal advantage and doing the right thing, choosing friendship and ethical behavior pays the greatest dividends.

My Day in Court

The Jewish Ethicist: The Corporation and the Community, Part 1 Corporate Philanthropy
Chukat 5782: Let’s Play the Blame Game!
The Sin of Moses: The Two Ways to Communicate
In Aftermath of Chicago’s July 4th Shooting, Local Moms Provide Countless Points of Light
Comments
MOST POPULAR IN Current Issues
Our privacy policy