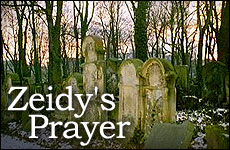 How divine providence connected my great grandfather, father, and daughter across generations and continents.

This is a true story about a "kvitel," a little prayer note; the type that is often scribbled, folded and tucked by Jews into the crevices of the Western Wall in Jerusalem. It's a story about my father and my daughter, the special connection between them, and how my daughter went on a unique mission to fulfill my father's last wish.

It's a story about God's personal divine providence, and the power of Jewish history and continuity. 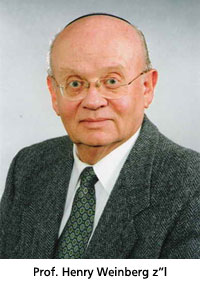 First, some background: My father, Prof. Henry Weinberg z”l, a former member of Knesset, passed away in Jerusalem in December 2006, after a long, amazing life that took him (fleeing from the Nazis) from Poland to the Ukraine, Siberia, Uzbekistan, France, Israel, the United States, Canada, and then finally back to Israel (and election to the Israeli parliament in 1996 as a representative of Natan Sharanky’s Yisrael Be’Aliyah political party). He lived to see all his children and grandchildren living aside him in Israel.

My father came from a long line of Sanzer and Bobover Hassidic Jews in Krakow who were pillars of the community, going all the way back to the students of Rabbi Yeshaya of Pshedbosh in the 1600s.

My father had visited the grave of his grandfather, Dov Beirish, in Krakow, twice over the past decade (once together with Prime Minister Benjamin Netanyahu, during the latter’s first term in office). The ancient cemetery in Krakow is enormous, overgrown and partly destroyed -- such that it is hard to find any gravestone.

But my father did find his grandfather’s grave; and he brought photos back to the family. [The gravestone, we discovered, had been re-done after the war by a cousin, Rav Tzvi Hersh Meisels of Chicago, Wiziner Rav, author of Mekadshei Hashem]. 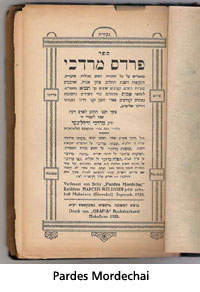 Here begins the story. Some three months after my father’s passing, my brothers and I were digging through the voluminous papers and books in his Jerusalem apartment. Among the many ancient holy books, I discovered an original, first edition copy of "Pardes Mordechai," a volume of Torah commentary written by my step-grandfather Rabbi Mordechai Wulliger (published 1928 in Munkatch, Hungary), personally inscribed by Rabbi Wulliger to my father. (The book, which was written when Rabbi Wulliger was a mere 18 years old, has a letter of endorsement from the Chafetz Chaim, among others!)

Inside the faded book, my father had stashed documents and papers in envelopes, all neatly labeled. Clearly, he wanted us to find these papers. One of the envelopes had a red tab on it, and was labeled: The "New" Cemetery in Krakow.

Inside that envelope I found a photo of Dov Beirish Weinberg's gravestone in Krakow. I had seen this before, but attached to the photo was a hand-drawn map; a map sketched out by my father with detailed instructions how to find Dov Beirish’s grave inside the old/"new" cemetery. According to this map, Dov Beirish's plot was adjacent to the gravestone of the well-known Rabbi Shimon Sofer -- a Talmudic giant.

At the bottom of the map, my father had written: "Attached is a 'kvitel.' Please deliver the kvitel to the grave of my grandfather." (It is a tradition to leave such prayer notes at the graves of ancestors, similar to leaving notes at the Kotel).

We shuddered. A last request from my father's grave.

I read this out to my brothers. We shuddered. A request from the grave -- my father’s grave, sending us on a mission -- to the grave of our great grandfather! A last request, so carefully thought out and mapped out by our father, labeled clearly, and left conspicuously behind for us to find.

We peered at the small, square piece of paper that was attached to the map, folded into four. "A kvitel for the grave of Dov Beirish Weinberg" it proclaimed. Hesitantly, we opened it. "Refuah shleima for … and bracha ve-hatzlacha for Zvi Meir Weinberg and his family," it read -- a prayer for a relative’s health, and for the good fortune of our entire family. 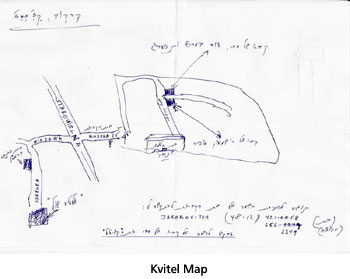 Amazingly, that day -- the day I found the book Pardes Mordechai with the photo and map and kvitel and my father’s request -- was four days before my eldest daughter, Ariella Rachel, was scheduled to leave with her class on a heritage trip for Poland and Krakow!

Four days! Could my father have known? Was this but a coincidence?

No, I have never believed it was.

Now, Ariella was on a mission for her grandfather. To her great-great-grandfather’s grave, to deliver the kvitel.

It was no happenstance that Ariella was "chosen" for this mission. Ariella was my father's oldest and favorite grandchild, the apple of his eye; named after his mother, Rachel Weinberg of Krakow. Ariella and her "Zeidy" (Yiddish for grandfather) had a special relationship. Zeidy was now sending Ariella on a posthumous mission to his grandfather's grave. 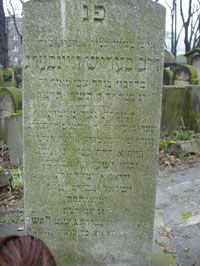 Arrangements had to be made, fast. Ariella's school principal and teacher were very understanding, indeed excited, when I told them the story and showed them the kvitel. But they explained to me that breaking away from the class to make a special, personal side trip to the cemetery in Krakow would not be an easy thing. It necessitates advance approval by the Israeli security team that accompanies each Israeli class in Poland, and requires the accompaniment of a teacher and special transportation arrangements. And there wasn't much time. Nor would they have much time in Krakow to search for the grave. And who knows how long it would take to find the grave, if at all!

Using Zeidy's map, which was extraordinarily accurate, she found the grave of Dov Beirish Weinberg in no time at all, placed the kvitel on the stone, and prayed for the entire family. Then she left photos of our family on the grave, and lit ten candles shaped into the Hebrew word "Chai" (life).

"What should I do if I get to the grave?" Ariella had asked me at Ben-Gurion airport before she left for Poland. 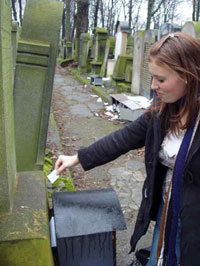 "Well," I answered, "you deliver the kvitel. Then you can say some Psalms. And then you can say to Dov Beirish: 'Hi! I'm your great-great-granddaughter! The family survived Hitler and I live in the sovereign state of the Jewish People, in Israel!”

And so she did.

Upon her return landing at Ben Gurion airport in Israel, Ariella excitedly showed me the photos on her camera from the cemetery in Krakow. "I wish I could show these photos to Zeidy and tell him that I made it to Dov Beirish's grave with the kvitel," she said to me.

"Don't worry," I replied. "I'm sure that Zeidy already knows…"

United in Tears
Scientific Curiosity and the Divine Encounter
Mind Over Milkshakes
Love the Convert
Comments
MOST POPULAR IN Israel
Our privacy policy
Aish.com Is Looking for Great Writers