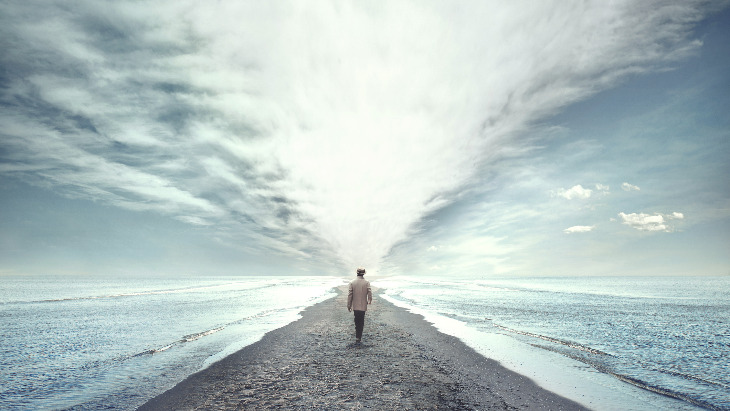 Why do some Jews refer to God as "Hashem"?

If you spend time around observant Jews, you probably know that Hashem, literally “The Name,” is a common way to refer to God. Why do people use this appellation?

True, on one hand it is forbidden to pronounce the actual four-letter name of God (Yud Heh Vav Hey). But a deeper reason for saying “Hashem” is because that is the essence of our relationship with God. To explain:

Nobody walks around calling themselves by their own name. I don’t say, “Jon is going to eat breakfast and then Jon will go to work.” Rather I would say, “I’m going to eat breakfast and then I’ll go to work.” The only people who talk about themselves in the third person (and get away with it) are egocentric athletes, politicians, etc. Even in English we call it “third person” – not first, not even second, but third. It suggests a distancing from an intimate relationship.

A handle is not the essence.

A name essentially only exists for the benefit of the outsider. People don’t identify themselves by their names – that’s why names are also called “handles.” As in, your AIM or Google-chat handle. (Anyone remember CB radios?) A handle is something outside the very essence of the thing, but exists so that other people can hold it. A coffee mug has a handle – not to contain the coffee (the mug’s real purpose), but so that you can have a relationship with the mug which allows you to partake in its coffee.

Human beings are no different. We don’t have a big relationship between our identity and our name, but other people do. An indication of this is how we can meet someone that shares our name, and have a very clear separation between us and them. I have a very good friend named Jon. In fact, when I think of the name Jon, I don’t think of myself. I think of him!

So why do we say “Hashem?” If names are there to help those who say it and not the person or object being named, then why don’t we call God by His true name (YKVK)? Why the distant appellation, “The Name”?

The name you choose to call someone by indicates the relationship you have with them. Knowing God is infinite should humble us and remind us of the endless limitations we have as humans. The four-letter name of God (YKVK) that is written in our prayers is never pronounced phonetically because that name represents the infinite aspect of God which is beyond human comprehension. That name is really a combination of three Hebrew words: Haya, Hoveh and Yeheyeh – past, present, and future. The idea isn’t just that God was is and always will be, but that He transcends time. In other words, God exists in the past, present and future – simultaneously.

Being stuck in a finite world, this is something we cannot fully comprehend, but the concept of God being Infinite is something so powerful and humbling that just saying "Hashem" (The Name) helps us do two things: One, it evokes awe by reminding us of the infinity of God as reflected in the four-letter Name; and two, it distances us from this concept to remind us of our own limitations.

Reminding ourselves of our own limitations is a great thing. It brings us to rely on that which does not have limitations, namely God. Healthy dependence is a great way to build a relationship which, after all, is the essence of our job here on Earth – to forge a relationship with the Creator.

Imagine a city in the middle of a war. The dirt flying in the air. Missiles overhead. Everything in chaos. The smell of chemicals permeating the thick fog that has become the sky and civilians running through the streets in confusion, in panic – a living nightmare. A doctor runs across the blood stained streets looking for people he can help, wounds he can heal just enough to get people back on their feet so they can keep running, keep living. He tends to a man bleeding from a piece of shrapnel, when he suddenly hears someone call out, “Doctor.”

A short distance away he sees the woman calling out. She is hurt and in need of immediate attention. But as soon as he runs toward her, he hears another voice: “David!” He looks over to see his neighbor on the ground with a serious injury. No sooner than two steps into the neighbor’s direction, a small voice pierces through the sweaty air and whispers, “Dad.” The doctor is paralyzed for a moment before looking for his son amidst the rubble.

"Hashem" is the Jewish people’s way of saying Dad.

To most people, the man in the story was an anonymous person running around the streets – until someone saw him performing a medical act. Then he became “Doctor.” To his neighbor, however, he was “David,” a name that suggests an attachment that forced him to care just a little bit more. And when he heard “Dad” come through the thick fog, he was paralyzed.

This is the power of a name. It defines the relationship we have with the person and forces us to treat them in a particular way.

"Hashem" is the Jewish people’s way of saying Dad. Dad is not the person’s legal name, it’s not their Hebrew name, it’s not their business title. It’s shorthand. It’s a way to say that we, as Jews, have a nickname for You, God. It’s a nickname that suggests both intimacy and respect, like the appellation "Dad." It’s a way to tell your father that you love him, but that you still understand he’s the father, he’s in charge.

Likewise with Hashem: We love You and feel close to You. And at the same time recognize our distance and Who is really in charge.

Jon Dabach got involved with Aish in 2006 when he spent some time at Aish HaTorah in Jerusalem. After coming back from his trip in Israel, Jon continued to learn and study Torah in Los Angeles under the auspices of his rebbe, Rabbi Yitz Jacobs. In addition to writing articles and learning Torah, Jon enjoys making Jewish themed art and teaching classes on spirituality. He currently teaches a class on the spiritual meditation behind Jewish prayer on Monday nights at Aish HaTorah in Los Angeles.

If You Were God
In the Shadow of David and Goliath
Where Do the Laws of Nature Come From?
Saadiah Gaon, Rashi and Maimonides: How Three Rabbis Revolutionized Judaism
Comments