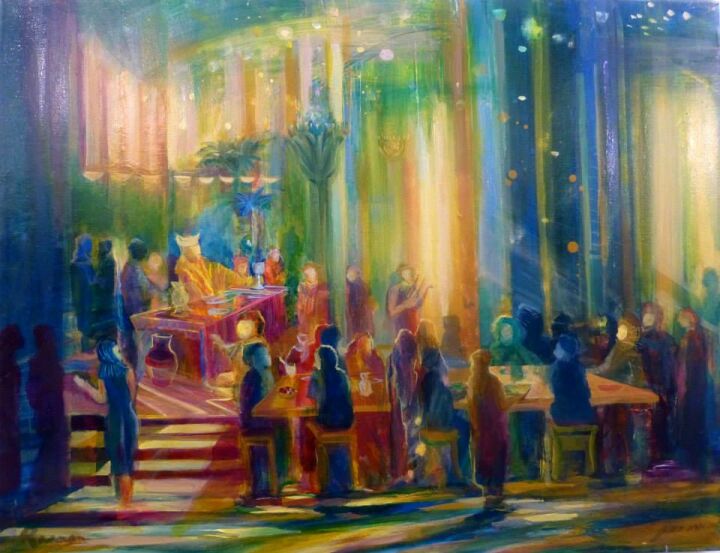 [Joseph] was served by himself, and the brothers by themselves... The brothers were seated [by Joseph] in order of their ages. They looked at each other in amazement. Joseph sent them portions from his table... they drank and became intoxicated with him. (Genesis 43:32-34)>

Without revealing his identity, Joseph, the grand vizier of Egypt, has invited his brothers to dine with him. Glowing sunlight pours into the great banquet hall. In the background, Joseph sits elevated at his own table, surrounded by his entourage, in a flood of golden light. Cool greens and blues predominate the foreground, where his brothers sit.

Yet the face of the brother at the head of the table - Yehudah, who is destined for kingship ? is illumined. There is a play of light and shadow that evokes a feeling of mystery; and a feeling of magic and intoxication is created by the bubbles and spheres in the air, the lights of the sky echoed in the faces. The scene is painted with much attention to detail, the figures clearly delineated against the background of curtains and windows, yet much is left to the imagination. According to Raanan, this painting was influenced by the Italian painter Piero della Francesca.

More Articles on Mikeitz
MOST POPULAR IN Aish.com
The Scandalous History of the Aleppo Codex
One Drink Too Many: My Journey of Breaking Free from Alcohol
How a Spate of Synagogue Bombings in the 1950s Is Impacting Us Today
This Is How Your Marriage Ends
When There are No Words
Ridley Road: The Real Story of the Jewish Anti-Fascist Group in 1960s London
Our privacy policy