The Final Solution on Tisha B'av 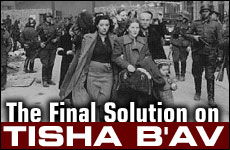 The Holocaust is rooted in the destruction of the Temple -- which caused a loss of moral clarity in humanity.

"I walk out into the street as does everybody else thirsting for news [of the rumored deportations]," Hillel Seidman writes in his Warsaw Ghetto Diaries, "only to discover that from this morning the Ghetto has been surrounded by Ukrainian militia! These include some Latvians and Lithuanians – angels of destruction of every type. Anyone approaching the walls is shot on the spot. We are ensnared in a trap?"

Seidman describes being caught with thousands of other Jews and funneled by armed guard to the umschlagplatz, the waiting area to the train station. There, cattle cars – freight wagons normally used for transporting animals – are waiting to deport them to their deaths:

"And so we march? old and young, women and children, rich and poor? in lines of eight abreast, according to the German system, in our many thousands, and the crowd stretches back as far as the eye can see? Everybody presses tightly together; so united in suffering, so totally an Am Echad (one people). Never before have I sensed so palpably the strands which bind us Jews together; our common cause, and our united purpose like I do today on the death march?"

Seidman managed to escape deportation, but thousands of men, women and children did not. That night, his mind numb, he returned to his quarters:

"As night falls I finally reach home, my brain bursting with terrifying images... Crossing our courtyard I notice our small shtiebl (synagogue)... About 20 men sit on upturned benches – it's Tisha B'Av tonight! Two flickering candles at the temporary prayer stand dimly light up the bent heads, with their eyes staring into the far distance, as that heartrending tune wells up: "Eichah (Lamentations)?"

"The tune that was perhaps first composed at the exile from Jerusalem and has since absorbed the tears of generations...

"How alone [Jerusalem] sits, the great city of many inhabitants?. Indeed how alone, how forlorn we are today.

"All [Jerusalem's] pursuers entrapped her in dire straits?. I called to my friends but they betrayed me. How true, how real those ancient lamentations read; how accurate they describe our present catastrophe?

"We Jews of Warsaw, sons of those exiles, sit on the ground to mourn our own personal churban, the destruction of a major community – the largest and most vigorous in Europe... We weep at our fate, a nation without a land, within the grasp of our fiercest enemy and condemned to death. We grieve both for the loss of the Holy Temple and the extinction of our lives. (Warsaw Ghetto Diaries, pgs. 55-6)

The beginning of the end of the Warsaw Ghetto coincided with Tisha B'Av. Indeed, it was the day of Tisha B'Av itself, July 23, 1942, that the first trainload of Jews arrived at their destination, Treblinka, and sent to the gas chambers.

Remarkably, it was one year earlier, on July 31, 1941 (on the evening of the 8th of Av), that Hermann Goring signed a document to implement the "final solution of the Jewish problem," i.e. extermination. The Nazis had been killing Jews since the beginning, but not in a truly systematic fashion. Einsatzgruppen firing squads, which gunned down more than a million Jews, proved expensive and messy. Ghettos were disease-ridden, a bureaucratic nightmare to run, and ultimately too slow achieving the goal of extermination.

Treblinka required only 100 guards to murder one million people.

Treblinka, one of six death camps, was an entirely new phenomenon: a "factory of death." Built with renowned German industrial genius, it existed for the single purpose of murdering mass numbers of people, mostly Jews – in the quickest, most cost effective way possible.

Treblinka was the destination for most of Warsaw's Jews. It was roughly the size of two football fields, and utilized only about 20 SS police and 80 Ukrainian guards. In its 14 months of existence, more than 800,000 Jews were gassed to death.

The first national tragedy that took place on Tisha B'Av was the decree that the generation who left Egypt with Moses would not be allowed into the Promised Land. They had panicked at the thought of confronting the mighty kingdoms occupying Canaan, and they accepted the spies' recommendation not to enter the Land. Their fear caused them to forget all the miracles that had led to the Exodus, and in effect caused them to even forget God.

One generation later, tens of thousands of Jews fortified themselves up in the city of Beitar, as part of the Bar Kochba revolt against the Romans. When the city fell, all the Jewish inhabitants were killed – a catastrophe that Maimonides likens to the destruction of the Temple itself.

On Tisha B'Av 1914, World War I began – a war whose outcome triggered World War II and its Holocaust. Indeed, immediately after World War I, the great rabbi the Chafetz Chaim said that despite the scope of the war, it was not the "war to end all wars," but merely a prelude to a far worse war that would take place 25-30 years later.

All tragedies that befall the Jewish people are rooted in the original one. The Holocaust may have been in scope, but it is an extension of the destruction of the Temple and ensuing exile. In fact, when a leading rabbi was asked by Menachem Begin which day the Israeli government should designate as Holocaust Remembrance Day, the rabbi replied that no special day is necessary, as we already have Tisha B'Av.

How is the Temple's destruction connected to the Holocaust and these other national tragedies?

The Temple stood for the spiritual truths of Torah – justice, equality, respect for life. The Temple enabled God's immediate presence be felt in every moment of every Jew's life. It served as a vibrant, indispensable source of morality and clarity for the entire world. The destruction of the Temple removed from the Jewish people the vital contact with the Divine and caused a rupture in humanity – a loss of moral clarity and direction. And the Jews bore the brunt of the ensuing barbarism.

That is what we mourn on Tisha B'Av.

That is why we must recommit ourselves to the building of the Holy Temple and the ideals it impressed upon the world.

Article written in the merit of my father, Chaim Benyamin ben Yaakov Reuven, z'l. May his memory be a blessing.

Stateless: When Germany Deported Thousands of Polish Jews in 1938

ness of the Holocaust
Why the Mezuzah is Placed on a Slant
Faith: the Axis Upon Which the Wheel of Science Turns
Love - Not Just About Chemicals Anymore!
Comments
MOST POPULAR IN Holocaust Studies
Our privacy policy