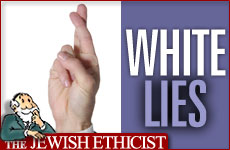 Q. When an important customer calls, it's awkward for me to say I'm busy. So I tell my secretary to tell the caller I'm out or in a meeting. Is this an acceptable "white lie"?

A. Our tradition has a seemingly conflicted view of so-called "white lies," which are meant to smooth over social situations. (Lying to obtain undeserved personal benefit is considered fraud.) In some passages, we find this practice to be sanctioned and even favored; in others it is barely tolerated. Let us see if we can find a coherent message in these seemingly conflicting passages.

In general, such "social lies" are considered a last resort, an unfortunate necessity. One example is the story of the Talmudic sage Rav and his son Chiya. Rav had a strained relationship with his wife, and she would often do the opposite of what he requested. Their son Chiya eventually learned to relay the father's requests to the wife in an altered way that helped restore harmony. When the father eventually learned of this, he praised the son's wisdom but instructed him not to continue with this practice. Since this alteration was habitual, it carried a danger of accustoming the son to bending the truth. (1)

Another is the story of the land of "Kushta". The Talmud relates a parable of a land called Kushta (the Aramaic word for "truth") where no one ever lies, and no one dies before their time. When a visitor inadvertently tells a neighbor that his wife is not home, in order not to embarrass her by stating that she is washing her hair, he is visited by a terrible tragedy. (2) The message seems to be that such social lies, while permissible in our social reality, are an unfortunate necessity of a world accustomed to untruth.

However, in a few cases we find that alterations are totally acceptable. Here is one passage:

Rabbi Ilaa said in the name of Rabbi Elazar the son of Rabbi Shimon: It is permissible to alter [the truth] for the sake of peace, as it is written (Genesis 50:16-17) "Your father commanded before his death, saying, Thus say to Joseph: Please bear the wrongdoing of your brothers and their sin." [Yet Jacob did not actually make this command.]… The students of Rabbi Yishmael taught, Great is peace, for even the Holy One blessed be He altered [the truth] for its sake, as it is originally written [Sarah exclaimed on hearing she would give birth] "My master is old", yet later it is written [that when God reported the incident to Abraham He changed it to] "I am grown old". (3)

Here the behavior of God Himself in saving Abraham's feelings is viewed as an example for human emulation.

The following passage is well-known:

The academy of Hillel point out that beauty is in the eye of the beholder; the person who bought the item evidently liked it, and the groom evidently finds his bride lovely and gracious. This is not an occasional subterfuge but a general instruction that the guests should praise the bride.

If we look carefully, we can see a difference between the cases that are tolerated and those that are encouraged. Both cases where the modification is accepted are cases where it is made for the benefit of the person being misled: to avoid making Abraham feel old and disdained, and to avoid making the bride feel unattractive. Both cases where it is merely tolerated are those where a person makes the change for the benefit of someone else: Chiya bar Rav for his father, the guest in Kushta for his wife.

While "social dissembling" may sometimes be necessary to salvage social relations, the temptation to make this a habit is very great. So in this case the behavior is barely tolerated. But when it is done for the benefit of the person being spoken to, and particularly when it is matter of judgment and not something objective as in the case of the beautiful bride, we can be more lenient.

In your case the misleading is meant for your own benefit, and furthermore it is not really social in nature but rather commercial. One possible solution is for the secretary to always avoid giving too many details. Even when you are truly in a meeting, he can say merely that you are "unavailable"; then this description will not be interpreted as meaning "he is too busy for you". With a little forethought, almost all social lies can be avoided, particularly in a business context.

The Jewish Ethicist: Pyramid Puzzle, Part One
The Promise Of The Land
Which Chat Are You On?: Parshas Behar/Lag Ba’Omer
Do You Like Slow-Cooked Food? Thank the Jews
Comments
MOST POPULAR IN Current Issues
Our privacy policy