No Way to Promote Israel 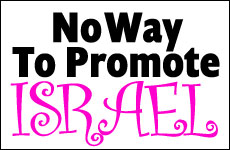 Amid concerns over the Hamas coup in Gaza this month, some Jews found
something different to worry about instead of the question of whether
Islamist killers were closer to their goal of annihilating the State of
Israel.

An unlikely alliance of Orthodox Jews and feminists were dismayed over
the fact that Israel's New York City consulate assisted an American
"men's" magazine in getting female soldiers to reveal a great deal of
flesh for its photographers in front of scenic backdrops. Even worse,
Israel's diplomats in the Big Apple also helped promote the photo
spread at an official reception in honor of Maxim magazine.


Susan Weidman Schneider, editor-in-chief of Lilith, the journal most
closely associated with Jewish feminism, denounced the consulate's
involvement as "sexist.' Some Orthodox Jews denounced the project as
demonstrating a shameful lack of morality. An emergency meeting of the
Knesset to deal with this shandah was even threatened.

In response, both consulate officials and cover girl Gal Gadot -- "Miss
Israel 2004," and a former Israel Defense Force fitness instructor -- responded to the brouhaha as if critics were not only hopeless squares, but also ignorant of the impact that Ms. Gadot's lithe form could have on Israel's public-relations problems
in this country.

David Saranga, Israel's consul for media and public affairs in the
media capital of the world, told the Jewish Telegraphic Agency that
Maxim was a "serious magazine," and that his job was "to promote Israel
as a normal country, particularly among the magazine's young male
readership."

Alas, I am such a policy wonk that I don't read Maxim, and so can
neither confirm nor deny its "seriousness." Informed sources tell me
that it's not as explicit as other examples of this genre, so perhaps
we should take Saranga at his word on that point.

But I was once a "young male," and I'm sure that the origin of pretty
girls whose pictures my generation leered at had no impact on our
opinions about politics, either domestic or foreign. I doubt that it's
much different for Maxim's readers today.

Granted, if Maxim's audience were presented with dueling photo essays
of Gazans in burqas and Israelis in skimpy swimwear, I suppose they
might decide Israel would be more entitled to most-favored nation
trading status than a putative "Palestine."

But the real problem is not the consulate's lack of concern for the
dignity of their country. It is the very notion that anyone will be
more willing to help Israel if they think its people are sexy. And it's
no different for those who think Americans will support the Jewish
state if they know how smart Israelis are.

The Israel21c campaign, which aided the Maxim project along with the consulate, helps promote Israel's image as a high-tech wonderland full of academics and entrepreneurs who are curing
diseases and building the modern equivalent of the better mousetrap,
which will motivate the world to beat a path to its door. The stories
they circulate are nice. But they do nothing to change the views of
those who think that Israel is a wicked oppressor of poor Palestinians.

And it is that canard -- not the fact that "young American males" might
not know just how hot Israeli girls might be or whether Israeli
geniuses are finding a cure for cancer -- that is the reason why some
American campuses and churches are hotbeds of hostility to Israel.

So long as the lies about Israel's supposed cruelty and responsibility
for not only the continuation of the conflict with the Palestinians but
the mess in the Middle East in general are being given a serious
hearing, all efforts to change the topic to how clever Israelis are or
how cute their women might be will be a waste of time.

What's wrong is not the lack of exposure of Israeli bodies, but of arguments that its cause is just and that its enemies are vile Islamist Holocaust-denying murderers.

Take, for example, the cover story in The Philadelphia Inquirer on
Sunday, June 24, about the economic and cultural gap between the West
Bank and Gaza. While its facts about the backwardness of Gaza were
indisputable, the causes for this gap, presented almost in passing,
were put down largely to the creation of the State of Israel in 1948,
and the restrictions on travel imposed by Israel and the number of
refugees in each area.

Unmentioned in the otherwise unexceptionable piece were the causes of
the 1949 armistice lines (an Arab refusal to accept statehood alongside
a Jewish state), the reasons for the restrictions (the widely popular
Palestinian cultural practice of supporting terrorism, especially
suicide bombing), and the refusal of the Palestinians and the Arab
world to resettle their refugees, as the Jews did theirs after 1949.

Witness, also the decision last week of both The New York Times and The Washington Post to give space on their op-ed pages to spokesmen for
Hamas. If terrorists whose goal is the annihilation of Israel are now
part of the national conversation, what's wrong is not the lack of
exposure of Israeli bodies, but of arguments that its cause is just and
that its enemies are vile Islamist Holocaust-denying murderers.

It is a bitter irony that ever since Israel resolved to make
unprecedented concessions to its foes for the sake of peace that its
support abroad has declined. British trade unions and academics were
not announcing boycotts of Israel prior to Oslo. But since 1993, the
notion that Israelis no longer believe in the right of Jews to live in
their ancestral homeland has helped fuel a growing anti-Zionist
movement in the West.

Most Israelis support territorial compromise so long as they get peace
in return. But their diplomats have spent so much effort either
whitewashing their supposed peace partners (as they did for Yasser
Arafat during the heyday of Oslo) or propping them up (as they are
doing now for Mahmoud Abbas) that it is no longer entirely clear to
many Westerners that what is at stake is the right of the Jews to their
own country, not the supposed right of Palestinians to destroy it to
achieve sovereignty themselves. They allowed the dialogue on the Middle
East to be one that balanced Palestinian "rights" against Israeli
"security," forgetting that the former will always trump the latter in
the court of public opinion.

If Israel's envoys want to catch the imagination of American youth,
they need to forget about the cheesecake. The bad press their country
gets is based on unchallenged pro-Arab propaganda and a lack of
advocacy for the rights of Jews, not foreign skin rags getting access
to its prettiest women.

Passover: Rising from the Ashes
Why My Iranian Mother Didn’t Want Me to Become a Religious Fanatic
The Jewish History of Prague
Why the Sexual Revolution was Bad for Women
Comments
MOST POPULAR IN Israel
Our privacy policy
Aish.com Is Looking for Great Writers