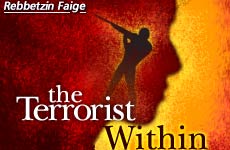 The war on terrorism needs to be waged on all fronts. We may not have the power to determine world policy, but we can take charge of our internal landscape.

I recently heard an interview with a microbiologist who gave a frightening description of the new microbes, germs, and organisms that appear to be surfacing. He voiced great concern that, in large measure, due to the overuse of antibiotics, these agents have already become more resistant to effective treatment. And as they mutate they will present an even greater threat.

Listening to these disturbing facts, the interviewer exclaimed, "Wow! How frightening must be your world of microbiology!"

To which the professor responded, "It is not only my world. It's your world -- it's our world. The only difference between us is that given my expertise and resources, I'm able to see what's out there and you cannot. But nonetheless, you are subject and susceptible to the same dire consequences."

Terrorism has always been out there, but now it has tragically reared its ugly head on our territory. Gone forever is the golden age of innocence. Gone is our sense of security and belief that despite what goes on everywhere else, we are safe and invincible. We, along with the rest of the free world, have become vulnerable to the evil that lurks out there that can, God forbid, strike at anytime.

As we applaud President Bush's "war on terrorism," we wonder what our individual role in all of this might be.

The Jewish perspective has always been that when things occur in macrocosm, in the world at large, we need to look to the microcosm, into our internal world, for a corollary.

The "terrorist" within seizes control and seeks to undermine and destroy that which we have built.

Many parallel insights have been offered. My son, Rabbi Ephraim Twerski of Chicago, suggested to his congregation that as we begin this new Jewish year, we need to combat the "terrorist" within. All of us, by the decisions we make in life, are major players in the structuring of life around us. When we make choices based on morality, decency and honesty we effectively build the structure of our world. Brick by brick we add to the strength and well being of the context in which we live.

Bottom line, we are the architects of both the material and spiritual parameters of our existence. Towards this end we are invested with an inner compass, a pilot if you will, to keep us on course, to negotiate the turbulent winds i.e. the alien values that threaten our values. All too frequently, the "terrorist" within seizes control. He comes as a voice inside of us that seeks to undermine and destroy that which we have built and that which have the potential to build. It tries to convince us in subtle and not so subtle ways that we are failures, that we cannot rise above past mistakes, that our flaws and blemishes condemn us forever to the dark side.

The "terrorist" within knows our weak points and hence its arguments are compelling. It seeks to stifle our growth and viability. Our response needs to be swift and decisive.

The cardinal sin in Judaism is to underestimate our incorruptible essence.

The cardinal sin in Judaism is to underestimate our heavenly invested and incorruptible essence that exhorts us to lift ourselves out of our past mistakes, assume responsibility and move forward towards the legitimate excellence and majesty that is our birthright as God's children.

Every positive act of compassion, empathy, guarding our tongue, resisting verbal assaults, curbing anger, diffusing envy, etc. is a brick and a contribution with our name on it to the strength of the structural configuration that is our world. Conversely, a deliberate destructive deed, a negative belief about ourselves and others, is an assault, an act of terrorism, an act of killing our potential.

The war on terrorism needs to be waged on all fronts. But the global efforts will ultimately be only as effective and successful as the sum of its individual parts. And this means you and me - the struggle, the conquests, and victories on our internal battlefield.

We may not have the power to determine world policy, but perhaps more significantly we can take charge of our internal landscape.

The war on terrorism begins on very personal ground, inside each one of us. As one world leader put it, "You have to be the change that you would like to see."

Judaism and Healthy Eating
Saadiah Gaon, Rashi and Maimonides: How Three Rabbis Revolutionized Judaism
King Sennacherib and the Siege of Lachish
Three Small and Easy Changes to Add Positivity in Your Home
Comments