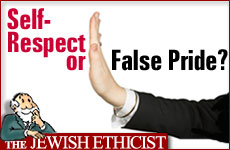 Sometimes it's okay to accept a present.

Q. Our family can't afford bikes for all the kids. A neighbor whose kids are already grown wants to give us theirs, but my dad won't accept them. He says this is self-respect, but I wonder if it is false pride.

A. It is certainly a proper instinct to refrain from accepting gifts. The book of Proverbs (15:27) tells us, "A greedy person corrupts his house, but one who disdains gifts will live". On the basis of this verse, the Shulchan Arukh (authoritative Code of Jewish Law), mentions: It is a mark of piety not to accept gifts, but rather to trust in God to provide enough for his needs, as it is written, "One who hates gifts will live". (1)

Likewise, we find the sages of the Talmud using this verse as their basis for declining gifts. Rebbe Elazar in Babylonia refused to accept gifts from the Exilarch (secular authority of Babylonian Jewry), while Rebbe Zeira in Israel refused to accept gifts from the Nasi (Jewish governor). Both cited the above verse, "One who disdains gifts will live." (2)

Yet this is not the whole story. In other places we find that it is proper to accept gifts. We also find the following statement in the Talmud: "All [the promises of] the visions of the prophets refer to one who marries his daughter to a Torah scholar, and who does business with a Torah scholar, and one who gives a Torah scholar to benefit from his possessions." (3) And we find that Rebbe Elazar the son of Rebbe Shimon, one of the greatest sages of the period of the mishna, who just as his resources were dwindling received a gift from sixty sailors who brought him sixty purses filled with money. (4)

The issue of false pride also arises. Regarding charity, the Shulchan Arukh tells us that normally even a needy person should try to tighten his belt and avoid accepting charity. However, "Anyone who is truly in need and cannot live without aid, such as an old or sick person or one in great suffering, yet affects pride and does not accept, he is guilty of bloodshed and is mortally culpable". (5)

Of course this is an extreme case. But there is also a more relevant example. In a highly instructive story in the Talmud, we find a tense interchange between two of the greatest leaders in Jewish history. One is Rebbe Yehuda the Nasi (governor), who was simultaneously the leading Torah authority in the Jewish world (he was the redactor of the entire mishna), the leading secular authority (governor), and also one of the wealthiest individuals. The other is Rebbe Pinchas ben Yair, who was famous for his ascetic habits, his burning concern for the welfare of his people, and his zealous personality.

Accepting a gift can be a way of recognizing the status and beneficence of the giver.

He said to him, do you think I have forsworn benefiting from other Jews? Israel are a holy people! [The problem is that] some people are willing but don't have [means], while others have and don't want [sincerely] to give... You want to and also have [means], however right now I'm in a tremendous rush. (6)

Pinchas ben Yair rushed to deny that he refused to be a guest on principle. The reason he seldom stayed by others was that when poor people invited him he did not want to be an imposition, and when wealthy people invited him he often suspected the invitation was not sincere. However, "Israel are a holy people" and when he was convinced that the invitation came from a sincere person of adequate means he was ready to accept it.

What about the admonition "One who disdains gifts will live"? The leading commentators explain that the "gifts" mentioned in this verse refer to bribes, or gifts that are in the nature of bribes and are meant to affect a person's judgment. In fact, many translations translate the verse "he who hates bribes." Rebbe Elazar and Rebbe Zeira declined to accept gifts from the secular rulers because they were worried that it was meant to compromise their objectivity and align them with the rulers against the people and the scholars. When this concern is missing, as with the great Rabbi Yehuda the Nasi who was renowned for his integrity and scholarship, even Pinchas ben Yair who generally refrained from accepting invitations was fundamentally willing to accept.

The question of how to deal with offers of gifts is a delicate one. There is no question that our first instinct should be to decline -- out of a concern for self-sufficiency, for an unwelcome sense of obligation, or for a gift that may be a financial or social imposition for the giver.

However, as Rebbe Pinchas ben Yair acknowledged, accepting a gift is a way of recognizing the status and beneficence of the giver; refusing one may show that you are unwilling to owe a favor to someone. And of course in many cases the gift itself is welcome and needed. So when you are sure the offer of a gift is sincere, is not a burden to the giver, and is not meant in any way to create an unwelcome obligation, it is not improper to accept a gift.

On The Brink in Ethiopia

The Jewish Ethicist: Is Business Ethical?

The Jewish Ethicist - Snitching to the IRS
Saadiah Gaon, Rashi and Maimonides: How Three Rabbis Revolutionized Judaism
King Sennacherib and the Siege of Lachish
Three Small and Easy Changes to Add Positivity in Your Home
Comments