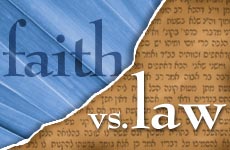 It's the age-old dispute between Judaism and Christianity, what reigns supreme: Faith or Law? Judaism maintains that without the law, ethics and morality wither.

The question of the relative values of law and faith was not and is not simply a matter of opinions. It is a life-and-death problem for both Judaism and Christianity.

Judaism resolutely maintained that deed was paramount; that only action could express faith and attitudes. Christianity firmly held that faith was supreme; that deeds enacted as religious observances were inimical to right faith and served to divert man from his ordained goals.

The salient example and root cause of this clash was the persistent assertion by Judaism that a man could never become a Jew without circumcision, which is the mark of the covenant, the external sign of the inner transformation. The new Christians at the turn of the millennium could not expect to convert pagans if they were to insist upon circumcision as an absolute prerequisite. They then proceeded to declare it completely unnecessary, and even counterproductive to the religious life of a Christian, which demanded a man's soul, not his practice.

When the early Christians annulled circumcision, they split from Judaism.

Until this point in the life of the new religion, the Jewish Sages had regarded their views as untenable, absurd, even un-Jewish, but they explicitly considered these Jewish "Christians" as sectarians, remaining within the fold of Judaism. Now, with the Christian annulment of the requirement of circumcision, they ruled that rejecting a Torah-required practice could not be countenanced and that the endorsers of this idea could no longer be considered within the ambit of the Jewish religion. No longer were they merely backsliding Jews; they were public betrayers who perverted the faith and then abandoned it.

The repudiation of Torah and the claim to possess a successor superior to it have been the contentions of Christians from the very beginning. The "good news" of the apostles was chiefly that the chains of the "law" had been lifted and superseded by faith. Paul's attacks against the law in Judaism are fundamental to Christianity.

The law was the first impediment inherited from Judaism and it had to be jettisoned as obsolete and even harmful. Whereas Judaism holds that ethics and morality are preserved by the law, Christianity contends that they are bludgeoned by the law. The dispute continues to this very day; it is the reason for the canard, glibly repeated by multitudes of Christians, that the "Old Testament" emphasizes a God of revenge and the "New Testament" emphasizes a God of love.

That view will not withstand a moment's glance at the history of religious wars, which will quickly demonstrate whether it was law or faith that preserved the spirit of love.

Far from being enslaved by the law, Jews were enamored with it.

In fact, far from being enslaved by the law, Jews were enamored with it.

The law, so much criticized by its daughter faith as severe and unforgiving and identified with the "dead letter," is mayim chayim, refreshing, life-restoring, living waters to Jews; the sweetness of honey and milk, the joy and strength of wine, and the healing power of oil. It is an "elixir of life" that brings healing to all.

ALSO SEE "WHAT IS TORAH?"

Rational Belief
Bechukotai 5782: Divine Retribution
Behar 5782: Working to Live or Living to Work?
The Wholeness of Being Broken
Comments
MOST POPULAR IN Philosophy of Mitzvot
Our privacy policy