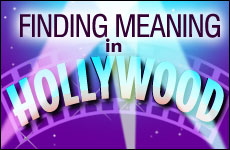 I'm good at telling funny stories in 22 minutes. I can choose to attach holiness to that, or not.

Around seven years ago I was at a Shabbat morning service at a temple where they had breakout sessions on various topics. I chose a discussion group titled, "Finding Meaning at Work." I remember sitting in a circle with about a dozen men and women of various ages and we were all asked to say what we did for a living. The person who started was a man in his eighties who stated that he was one of the architects of the Hydrogen bomb. He said he had trouble sleeping to this day, knowing that he was in part responsible for a weapon capable of apocalyptic destruction. The only thing that gave him comfort was the thought that maybe creating such a weapon helped to act as a deterrent to ever using it.

Next up -- and I promise this is true -- was a man in his fifties who worked for a defense contractor that helped develop an air-based missile delivery system for nuclear weapons. The two gentlemen had plenty to talk about -- nightmares and rationalizations about how their jobs ultimately led to peace. Our small circle was very sympathetic toward these two men, offering literal and figurative pats on the back for their willingness to share their pain.

Then it was my turn. "Hello, my name is Jeff Astrof and I write sitcoms for a living."

I was greeted with a chorus of boos. Unbelievable! Here were two men sitting to my left who could potentially be responsible for Armageddon and I'm being skewered for writing jokes!

I don't remember how the rest of the discussion went; my guess is that I said I found meaning in my job by being able to make people laugh, which is absolutely true. In fact, a member of that same congregation once told me that an episode of "Friends" I had written had made a good friend of hers laugh when she was undergoing chemotherapy. My guess is the guy who invented the H-bomb never got that.

Since that time, my wife and I have had two healthy children (thank God) and we have both become observant Jews who are very involved in our Orthodox community. And I am still a sitcom writer.

Now, there are many people who find being an observant Jew incompatible with writing sitcoms. First of all, there is the challenge presented by keeping Shabbos; many shows film or tape on Friday nights and there is a strong feeling of camaraderie that is broken when you tell your fellow non-observant Jewish writers that you have to leave at three in the afternoon on a winter Friday while they'll have to stay until near midnight, or that you'll need most of September or October off for a holiday that they've never heard of. It's still hard for me to ask for Shemini Atzeret off with a straight face. But, thank God again, I have been blessed with working for people who have been okay with it --especially the non-Jews. There are other challenges that include being in an environment that can become vulgar or gossipy. I am trying my best not to indulge in that (you should hear some of the stories…) but, ahem, I digress.

I was recently confronted point-blank about the seeming paradox of being a merchant of secular entertainment while refraining from eating treif. I was interviewed by a magazine that caters to the religious world about a Torah class that some other "Hollywood types" and I were taking. I was about 20 minutes into the interview when the interviewer dropped the million dollar question, "When do you think that your Yiddishkeit will force you to stop being a television writer?"

I want to be an example of how I can imbue meaning into my job.

I was immediately taken back to the people in that circle who thought that what I did was more destructive than nuclear weapons. I'm telling jokes, I'm not peddling pornography! I paused then answered something like, "God willing, never. It's what I do. And rather than let my job define who I am, I want to be an example of how I can imbue meaning into my job." In hindsight, I may not have used the word "imbue," but if I didn't, I wish I had.

A rabbi and friend of mine, Rabbi David Aaron of Isralight, tells the story of a screenwriter who, before sitting down to write a screenplay, asks God to "use him" as a vessel. I was so inspired by that story that I started saying a prayer every morning before I go into work: "God, please make me funny today. Please make me smart and creative. Please make me a good leader and a good follower. And please make me not do anything bad for the Jews."

Most of the time it works. On that level I am imbuing my work with spirituality -- there, I do imbue -- and am giving a joke or a story meaning by attributing it to the Creator. The same way that I say a blessing over my breakfast, I am adding a little bit of holiness into the words that hopefully millions of people will hear. That's not to say that every joke I pitch is God's best attempt at humor; believe me, I've pitched some clunkers that definitely did not come from Above. But it does give me a sense of perspective about my job.

I don't pretend that my job is as important as a congregational Rabbi, or a Torah scholar or someone who runs a drug treatment facility. In fact, if you asked a random person on the street to list the 100 most important jobs in the world, starting with the letter "s," sitcom writer probably wouldn't make the cut. But it is what I do best. I was recently at a NCSY parenting seminar and one of the Rabbis there said, "If you want to know what your purpose in life is, it's what you're good at." What I'm good at is telling stories in 22 minutes. I can either attach holiness to that, or not. I choose to go for the holy. Because when I involve God, it automatically makes my job more important. By eating kosher, by leaving early on Friday, by wearing a baseball cap to cover my head every day while telling silly jokes I am doing God's work. And nothing is more meaningful than that.

(I want to thank God for helping me write this article. Any typos are mine.)

Jeff Astrof is a television writer who lives in Hollywood with his wife and two children. He has written for many shows including "Friends", "Veronica's Closet" and "Grounded for Life". He is currently Co-Executive Producer of "The New Adventures of Old Christine" on CBS. 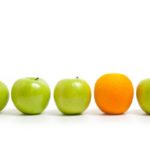 A Contest of Wills8 min read

Too Fat to Fly1 min read