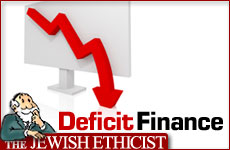 Judaism and the national deficit.

Q. Our country seems to be running a very large and imprudent deficit. Does Judaism have anything to say about this policy?

A. While it would be impossible to provide a definitive Jewish answer to such a controversial contemporary policy question, I believe there are a number of prominent Jewish sources which can give us a valuable perspective on this question.

The most important point to make is that Jewish tradition does not have a negative view of borrowing in general. Often a traditional or religious viewpoint is identified with one that affirms the importance of thrift and self-sufficiency, but we find that in the Torah borrowing is viewed as a natural and even desirable aspect of the economy.

The Torah emphasizes that lending to the poor is a very important mitzvah, one which God particularly oversees: "When there will be a needy person from one of your brethren in one of your gates in your land which the Lord your God gave you, don't harden your heart and don't tighten your hand from your needy brother. Surely open your hand to him, and lend him enough for his needs, which he is lacking. . . . Surely give him, and let not your heart grieve when you give him, for because of this thing the Lord your God will bless in all of your deeds and all of your endeavors." (Deuteronomy 15:7-10.) Earlier on the Torah commands, "When you lend money to my people, to the poor among you, don't be like a creditor to him; don't extract interest". (Exodus 22:24.) It is taken for granted that lending to the poor should be a routine part of Jewish life for a person of means.

Since it is a special mitzvah to lend to the poor person, it is evident that the poor person who borrows is not himself doing anything improper or discouraged. In fact, poor individuals are explicitly encouraged to borrow money for important commandments such as paying for children's education or minimal Shabbat expenses. The Talmud tells us that God assures the needy, "Borrow against Me, and I will repay." (1)

Not only the individual but also the community is encouraged to borrow money for essential expenses, even for current outlays (that is, not only for capital outlays which are a kind of investment). The Shulchan Arukh (authoritative Code of Jewish law) writes: "When there is a shortage in the charity fund, the treasurer should borrow, and when there is a surplus later on he can repay the loans from it without getting permission from the donors." (2)

In my opinion, the basis for these rulings is Judaism's basically hopeful and optimistic view of life. In the Jewish perspective the world is improving, not deteriorating, and each person should be hopeful that if things are a little tight right now, soon they are likely to improve.

Of course there are also limits to prudent borrowing, for the individual and the community alike. Hope is one thing, delusion something quite different, and the rabbis warn us not to borrow beyond what we have a reasonable expectation of being able to repay. The Bible tells us, "A wicked person borrows and does not repay" (Psalms 37:21), and the Shulchan Arukh rules that a person who uses a loan irresponsibly falls into this category. (3) The eminent authority Rabbi Yisrael Meir HaCohen cites one authority who rules that "a person should not borrow unless he reckons that he will be able to repay." (4)

I think we can also learn that deficits that are meant to pass the burden on to the next generation are inappropriate. Of course every deficit will to some extent impose current costs on future generations, but there is a question of degree and intent. Intergenerational transfers are a two-way street, and current adults also make significant investments in coming generations (example: tuition!) There is no reason all deficit spending should be considered unethical because some costs are borne by the unborn.

But this is different than having an entire older generation expect its pensions to be paid by the young, which seems to be the case for countries whose social security and pension systems are virtually completely unfunded. Judaism recognizes the obligation of children to support their aged parents, and even considers this the highest priority of charity giving, as the Scriptures teach us, "Don't hide from your own flesh". (Isaiah 58:7.) But ultimately this is still considered a form of charity (5), and our tradition urges us to strive assiduously to avoid dependence on charity and public support. (6)

To sum up: Jewish tradition does not attach any particular stigma to prudent borrowing, whether by the individual or the community. We are an optimistic and hopeful people, and a considered decision that things are likely to get better and that a loan may be a sensible way to get out of tight spot is considered natural and desirable. So deficit finance would certainly be justified under some circumstances.

However, imprudent borrowing is considered a vice, and so is thoughtlessly imposing one's needs on others, including future generations. Deficit finance should be limited to those needs which the current generation can reasonable expect to pay from their own future earnings.

The Jewish Ethicist: Limits of Protest

The Jewish Ethicist: How's My Talking?

Kosher in the White House
In the Shadow of David and Goliath
Where Do the Laws of Nature Come From?
Saadiah Gaon, Rashi and Maimonides: How Three Rabbis Revolutionized Judaism
Comments