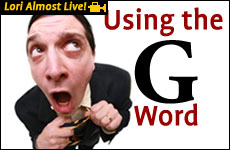 Don't be embarrassed to talk about God.

When Sharing Derogatory Information (Part 3)
Faith: the Axis Upon Which the Wheel of Science Turns
Love - Not Just About Chemicals Anymore!
Is There a Moral Code in a Virtual World?
Comments
MOST POPULAR IN Spirituality
Our privacy policy