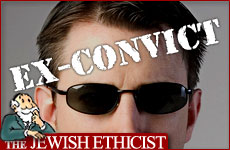 Can I publicize the criminal past of a new congregant?

Q.A new member of our congregation served time for being a con man. Now he is trying to interest congregation members in various business deals. Can I publicly alert the congregation to his past?

A. Any time we contemplate warning someone about a potential that someone may cause him a loss we are faced with a dilemma. On the one hand, the Torah warns us not to spread idle gossip: "Don't go about as a talebearer among your people." We need a compelling reason to badmouth our fellow man. Yet the Torah also admonishes us not to sit idly when we can prevent loss or harm to a neighbor: "Don't sit idly on the blood of your neighbor" (Leviticus 19:16). Highlighting this tension, both admonitions are in a single verse. The usual rule in this case is that disclosure is permissible only when, and only to the extent, that it is essential to preventing harm, and when it doesn't cause undeserved harm to the subject.

In this situation, the dilemma is amplified. The case for making a disclosure is much stronger, because the potential victim is not a single individual but rather a number of people; another weighty consideration is that the potential for danger seems unusually great if the person is a convicted criminal.

But the case against disclosure is also stronger than usual. Making a public announcement about a person's past is much more severe than making a private warning to a threatened individual. This could be considered a public disgrace, which is considered one of the most severe offences in Jewish law. In the Biblical story of Judah and Tamar, when Judah accuses Tamar of unfaithfulness, Tamar does not state outright "You, Judah, are the father". Rather, she risks punishment by stating obliquely, "The man to whom these [signs] belong I am pregnant" (Genesis 38:25). Rashi's commentary states: "From this it is said, it is better for a man to be cast into a fiery furnace than to publicly mortify his fellow."

This man's past also constitutes a two-edged sword. It certainly does increase the chances that his efforts to drum up business are a threat to congregation members. But it also obligates us to consider how our community enables rehabilitation of wrongdoers. If every person who has committed a crime has to live it down wherever he lives, then criminals will have little incentive to reform. They are already branded as threats. We find in many places that our sages were lenient towards reformed wrongdoers "so as not to lock the door before repentance." The renowned early Medieval scholar, Rabbi Yehuda HaChasid writes that even if a thief is compelled to return stolen goods because of a ban or because he was seen by witnesses, "we shouldn't publicly denigrate him and publicize the matter . . . We shouldn't embarrass him so as not to lock the door before penitents." (1)

Given these considerations, I think that the most productive course of action is not to make a public announcement specifying the individual, but rather to discern and announce the particular kind of business deal he is offering. Most con-artists draw on a limited and well-known repertoire of scams. For example: "A number of congregants have been approached about investing in Biafran mining stocks. We urge those approached to exercise the greatest caution, since we have heard many stories of investors being ripped off in similar schemes."

This in no way publicizes or shames the individual. In fact, it does not even condemn his activities since it merely urges those approached to exercise caution. Yet it is just as effective in protecting victims; arguably it is even more effective, since it puts people on guard for other people who may be peddling similar wares.

I personally am amazed at the ease with which people are convinced to put their money is schemes which seem to me so transparently hollow. This is a good opportunity to remind readers of an ancient guide to identifying market scams: "If it sounds too good to be true, it probably is."

The Jewish Ethicist: Scientist or Salesman?
Why Are The Prayers Of Yom Kipur So Repetetive?
Ha'azinu 5783: A Time for Unity!
Twisted Thinking
Comments