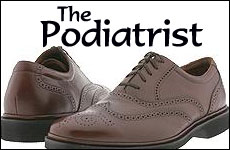 Amazing how a simple thing like an extra $1,500 can suddenly confuse one's thinking.

I have been flat-footed all my life. There is only one pair of shoes I can wear -- Dressport by Rockport. Virtually all other shoes leave me with aching feet. I can wear my running shoes when I work out, but aside from that, I am stuck in Dressports.

For some strange reason I've always procrastinated when it came to getting orthotics even though many people have told me it would help. Then, on a visit to my chiropractor, I noticed that he shared an office with a podiatrist; I mentioned my problem and he referred me to his neighbor. True to form, I cancelled and postponed the appointment three times but finally found myself sitting in his office.

He was very warm and friendly guy, and we chatted away. Although he did not have a Jewish surname, as we talked, I noticed that he sprinkled his conversation with Yiddish expressions and referred to his Jewish roots. He told me that he had treated seven different priests and ministers -- all for free -- but he never had the privilege of treating a rabbi. Of course, he'd extend the same courtesy to me.

As it turned out, it was some courtesy. My health plan did not cover orthotics, and I would need two pairs, each one costing $750.

While I was thrilled to be saving so much money, at the same time I felt uncomfortable. Was I entitled to such a generous offer?

Now I had never told him I had been ordained; the chiropractor must have. But I had also not clarified that I was no longer a practicing rabbi and was now working on Wall Street. After 25 years as a fundraiser for Jewish education, I had decided that I would henceforth make a difference in the Jewish world by being a donor.

But I had not explained that to him. Instead, I left his office somewhat sheepishly and walked out to my car. That day I was driving my wife's spiffy Landrover, not exactly the car of a struggling public servant. I saw him walk out after me going to an appointment; he got in an old beat up Ford.

Driving home, I felt more and more guilty. I had been reading the books by Meir Tamari explaining Jewish law concerning the accumulation of wealth and business practices -- Sins of the Marketplace and The Challenge of Wealth -- in order to prepare myself for the ethical gray areas I might encounter in my new career. I well remembered the author's words: "Jewish law forbids the defrauding, deceiving or misleading of people in all matters referring to buying and selling."

Was I not accruing material gain from the title "rabbi" though I was no longer working as one?

Was I not misleading the podiatrist? Was I not accruing material gain from the title "rabbi" though I was no longer working as one?

But then again, I rationalized, would I not be hurting his feeling by rejecting his gift?

Suddenly, I saw how a simple thing like an extra $1,500 can suddenly confuse one's thinking. Money is dangerous. Suddenly one plus one doesn't equal two.

I went back to Sins of the Marketplace to seek further guidance. One passage leapt out at me:

The yetzer hara [the evil impulse] for obtaining and retaining material wealth is probably one of the most powerful impulses people have. Still, money is not considered evil in Judaism and like all the other evil inclinations can be used positively when controlled and educated by the Torah and its mitzvot. Because of its very power, there are more commandments about achieving the education needed to "kosher" money (at least 120) than there are, for example, about kosher food.

It was clear to me that I needed to let the podiatrist know I was no longer working as a rabbi, and that it would be my pleasure and the right thing to do to pay for the orthotics. I was amazed that I had been tempted and did not clearly see the right -- and only -- response to his offer. It should have been obvious to me to say to him immediately and without any hesitation, "That's nice of you, but although I used to be a practicing rabbi, I am now a regular working guy like everyone else."

How could I have rationalized this for even one second?

I had been influenced by the deference shown a rabbi and enticed by the prospect of saving money. I had to remind myself that God runs the world and no one ever comes out ahead by not doing the right thing.

I made a commitment to explain to him the actual situation when I would return to pick up the orthotics.

Finally, after months of waiting, the orthotics arrived. When I went to pick them up, the podiatrist greeted me with a warm smile, "Hello Rabbi! So nice to see you again."

I immediately launched into the little speech that I had been rehearsing for months. "You know, I feel uncomfortable accepting the orthotics for free. I no longer work as a rabbi. It is nice of you to do this for me, but I think it would be unfair. I am out there just like you, trying to make a living. I am not a civil servant, which I assume is why you wanted to do this for me for free in the first place."

I said, "That is very kind of you. Are you sure? I can afford more."

"No, I insist. Besides your health plan will cover the office visits if not the orthotics themselves."

I was happy to have cleared that up. I thanked him profusely, happy to have gotten the orthotics at last. Now I would finally have some relief from my flat feet.

I took them home and began to wear them as he had instructed me -- one hour the first day, two the second, three the third, and so forth. But every day they felt more and more uncomfortable. I couldn't get used to them. My feet were sore and achy -- even more than before.

Then a week later I got a letter from my health insurance. They would not be paying for the office visits after all -- these were not covered by my plan. Now I faced another test. I had to write a check for the cost of the office visits, even though in the end I got nothing except sore feet.

This time I did not hesitate. I was not going to rationalize anything away nor let temptation snare me again. This was a small price to pay for the lesson the Almighty so lovingly taught me through this experience.

Now I was much better prepared to face the challenges that would surely come my way on Wall Street.

The Jewish Ethicist: Rat or Rap?
Blocked Goals and Anger
Why the Mezuzah is Placed on a Slant
Faith: the Axis Upon Which the Wheel of Science Turns
Comments
MOST POPULAR IN Current Issues
Our privacy policy