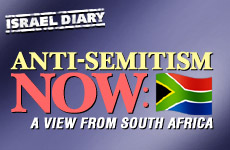 "Anti-Semitism is by no means dead. I can no longer pretend that I am just like everyone else on campus. If the world is determined to hate me, then I must be something special."

In South Africa amidst the 20,000 non-Jews that constitute my university, I always prided myself on contributing to the diverse ethnic and cultural mix which makes campus life so colorful. I would avidly discuss Jewish practices with Moslem friends of mine, and attentively draw in the fascinating customs of Moslem women.

All this has changed with the violence in Israel, marring my rose-tinted view of the world.

Campus life is tense, to say the least. The Moslem Students Association held a march on campus which culminated in the burning of the Israeli flag. A free speech wall at the main intersection of the university road is graffitied with the slogan "Jews-Bahais-Jews-Hutus" -- referring to us as African tribal murderers.

The South African Union of Jewish Students put up posters condemning these acts as perpetuating antagonism towards Jewish students. The Moslem Students Association responded by putting up slogans announcing that they are not anti-Semitic, but anti-Zionist.

Jewish students responded by putting up a poster in Hebrew, which read Am Yisrael Chai -- "the Jewish people are alive." This was promptly torn down.

All this leads me to one conclusion: Anti-Semitism is by no means dead. The perceived might of the Israeli army is merely a vehicle used to allow for free reign of anti-Semitism. The burning of the flag on campus has sparked further protests supported by top political parties. Many condoners have adopted the slogan: "Palestine equals Apartheid."

This slogan confounds me to say the least. It stands for the antithesis of two causes I have always felt strongly for and against. Growing up in apartheid South Africa, I saw the injustice firsthand. I was 12 years old when the system collapsed, but was nevertheless not too young to adamantly oppose it, and actively support its implosion. I know what the ugly face of unjustified oppression looks like.

Israel always stood, for me, as a manifestation of justice. After centuries of oppression, the world finally recognized our 2,000-year yearning to return to Israel -- the center of spirituality radiating in a world gone mad. The threat of losing this and the thought of it being equated with the most unjust and oppressive system evokes the sense that the world has inverted good with evil, and now one cannot tell the difference.

If the world is determined to hate me, then I can only stop them by wholly embracing myself.

I can no longer pretend that I am just like everyone else on campus. If the world is determined to hate me, then I must be something special. In a world where university curriculums still teach the anti-Semitic literature of Elliot and Lawrence, these "facts" are overlooked in the name of literary appreciation. No one cares that D.H. Lawrence wrote poems about gassing the Jews, a few years before Nazi death camps were put into practice. No one cares.

If the world is determined to hate me, then I can only stop them by wholly embracing myself. We as Jews cannot negate the importance of having pride in our heritage and our homeland. We have to know and believe that we are a great and worthy nation who has every right to the land we were promised 4,000 years ago.

With God's help, we can show the nations of the world that we are not subservient people who will succumb to the evils of hatred. We are a proud nation of priests who can say that despite the anti-Semitism, despite the rioting and fear and tension, despite all these illusions... indeed, Am Yisrael Chai -- "the Jewish people are alive."

"Israel Diary" is a forum where people across the spectrum can express their thoughts and views on life in Israel. The opinions expressed in this column are solely those of the author. Submissions should be sent to: submissions@aish.com.

PHOTO ESSAY: Israel's Pain and Pride
What Makes Eli Run?
The Tyranny of Materialism
Science Enters the Mysterious Inner World of Consciousness
Comments
MOST POPULAR IN Israel
Our privacy policy