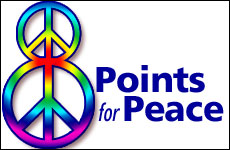 An advisory note to members of the Israeli Knesset.

We are currently involved in high level contacts to formulate a peace plan for the Middle East.

A comprehensive agreement will benefit the entire world. But unfortunately it is not easy to achieve, given the highly complex dynamics in the region and beyond.

Please consider the following points when navigating this process.

1) If you disseminate a long list of reasons why Israel will lose if the peace process is delayed, you may convince the enemies of peace to wait without any need to accommodate any of Israel's needs. The Palestinians and the Arab neighbors must understand that they have a lot to gain from a durable peace, and a lot to lose from a region in turmoil.

2) If you support the immediate creation of an independent Palestinian state – without first eliminating the terror infrastructure, without implementing education for peace, and without the removal of vicious anti-Israeli propaganda in the schools and media – then the Palestinian population and leadership will not proceed toward a serious peace agreement.

3) Should the Palestinians achieve an independent state without a peace agreement with Israel, all the forces of evil (Iran, Syria, Hamas, Hezbollah and Turkey, to name a few) will be delighted to use that territory to expand malicious plans against Israel and the free world.

4) A serious educational effort must precede any relinquishing of land, to explain the true historical facts as they relate to occupation, refugees and the rights of the Jews in the region. Once those in the region and around the world understand Israel's just cause, they will respect Israel’s willingness to make real sacrifices for a true peace, and will support the Israeli demand for security measurements.

Most people who correctly understand the situation support Israel.

As of now, most people who correctly understand the situation support Israel, but those convinced by propaganda still think that Israel is occupying not only Jerusalem and the territories, but also Tel Aviv, Haifa and Beer Sheva. Therefore, premature evacuation of large territories will only embolden the enemies of Israel to demand even more concessions.

5) I appreciate your trust in the good intentions of many world leaders, but unfortunately, if Israel shows weakness it will encourage many of them to tighten the screws on Israel, hoping to gain benefits and favors from the larger Islamic Middle East. Many Arab leaders have made it clear that their willingness to negotiate with Israel is only another stage in the greater plan to liquidate the “Infidel State” in the Middle East – before intensifying their efforts to take over Europe and later the USA.

The international community is too busy with itself and will have no patience with a weak Israeli entity the same way they have totally ignored Lebanon and other problematic states.

6) After so many years, Israel still has major problems accommodating the 8,000 individuals who were removed from Gaza (Gush Katif). Imagine what will happen if Israel tries to remove many more people from the West Bank. In a true peaceful agreement, Jewish families should be able to live securely under a Palestinian rule, the same way that Arabs live peacefully in Israel and enjoy equal rights as Israeli citizens.

The Palestinian people must not continue to be oppressed by self-serving leaders.

7) Building a strong Palestinian economy and extensive international relations, without a serious change in their anti-Israeli education and political intentions, will create an even more dangerous and aggressive opponent who will be better financed and better equipped to fight and oppose Israel. This will not be helpful even for the Palestinian people, who will continue to be oppressed by self-serving leaders.

8) We cannot rely on the UN or international observers to enforce a feeble agreement. The disarmament of Hezbollah, as supervised by the UN – following Israel's withdrawal from Lebanon in 2000, and again following the 2006 war – was and still is a sad joke. (Hezbollah now has re-armed with 40,000 missiles.) We do not want to create a similar situation on the West Bank.

The salient question before any peace deal: Is there responsible Palestinian leadership courageous enough to make bold decisions toward a real peace, which is supported by a majority of the population?

The key points of any agreement must include:

3. Recognition of Israel as the Jewish homeland.

4. Recognition that Israel is not occupying Arab land.

5. Recognition of the experience of Jewish, as well as Palestinian, refugees.

6. No cleansing of Jews from Palestinian territory, just as Israel does not advocate uprooting Arabs from Israel.

7. No reliance on outside enforcement.

8. Most importantly, serious educational effort must start immediately to promote peace, stop propaganda and dismantle terror infrastructure. Otherwise, what gets reinforced is the traditional teaching of Muhammad that permits deceiving the enemy in order to accumulate enough power to destroy them later, as he did to the tribe of the Quraish in Medina. This was one of Yasser Arafat’s favorite ways of explaining why he negotiated with Israel.

This will undoubtedly take a bit more time, but it is better to have a durable peace than a shaky interim pseudo-agreement.

Origins of the Word Palestine