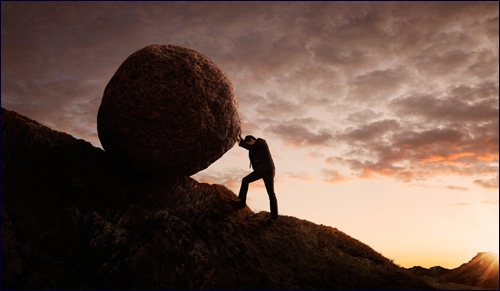 When it comes to spirituality, never take no for an answer.

He is convinced that he is not only stupid, but defective, evil and undeserving.

Mr. Mistake sits in the corner, out of the inner circle, marginalized, left over and left out. He is busy raking himself over the coals, telling himself that he is bad through and through, thinking, “After what I’ve done, there is no way out, and certainly no way back to what was.”

Except, Hanukkah reveals that perhaps there is.

When the battered, little contingent of faithful Jews finally made it back to the Temple at the time of the Hanukkah story and saw the horrendous desecration, they were not feeling triumphant. They knew that the damage done to the Temple was just a reflection of their own distance from God. The Temple was a microcosm of humanity's relationship with God. What did it say about themselves and their own spiritual standing if everywhere they looked they saw only desecration, contamination and profanity? Maybe this was a sign that they, too, were unsalvageable. Could anyone have blamed them for just giving up?

There was no pure oil – and wouldn't be for the next eight days. They couldn't even light the menorah, so maybe God wasn't interested in their service. And why should He be if they were really that bad?

Distance does that to a person. It saturates one with self-dislike, convinces one that there is no way to wash off the dirt that feels branded into one's very skin. It makes one despondent, depressed. Mr. Mistake just wants to give up and give in. I have fallen far and there is no way back.

In the Talmud, the Hellenistic culture is compared to a leopard whose defining feature is brazenness, azut in Hebrew. The Maharal explains that there was a brazenness in Alexander's desire to spread his worldview everywhere. It was about saying: I know best and everyone else is entitled to my opinion.

But in Judaism brazenness, like every other negative trait, has its pure counterpart, in this case called azut dekedusha – holy brazenness. To understand what this is, imagine a boss who fires his worker but then relents when the worker begs forgiveness. The boss agrees to rehire the former employee, but relegates him to a small office in the back corner instead of his former, spacious front office. Instead of gratefully slinking to the back office with his tail between his legs, the worker announces that he isn't coming back to work until he gets the front office again. There is a word for that kind of behavior in the Webster dictionary – it's called chutzpah!

Chutzpah is a Jewish kind of thing and boy, was it needed now! The truth is that given the context of the Hanukkah story, it wasn't really necessary for the oil to be pure. In times of war, when dead bodies abound, certain levels of purity are waived. But the Maccabees refused to take the back office. They were determined to come back into God's embrace and to come back full force. They insisted on using pure oil to light the menorah even though there was obviously no point, because by tomorrow it would have burned out and they wouldn't have any more. But they refused to take no for an answer: pure oil represented a higher level a relationship and they were going for the gold.

Yet, as anyone in a relationship knows, brazenness only works up to a point. At the end of the day, you can't force a relationship; there has to be an interest and willingness on the other side. How would God respond to them setting up camp in their former front office? The Jews waited breathlessly, two days, three days, four, five, six, seven, eight! If you notice, on the calendar, the eighth day of Hanukkah is called zot hanukkah – this is Hanukkah. The deeper reason for that is because it was only on the eighth day that the message of Hanukkah shone through. When God let that little flask of pure oil burn for the eight days necessary to procure pure oil again, it was then that the Jews knew that they had been reinstated to their former closeness.

Imagine a most delicious waterfall of forgiveness cascading over Mr. Mistake, caressing his wounded, crippled soul, cleansing his open wounds, smoothing out wrinkles of worry and lines of despair, loosening the layers of smallness and pettiness inscribed on his soul, dousing the burning coals over which he had raked himself.

With their Jewish chutzpah, the Maccabees reached out to God by insisting on using pure oil, and God responded to their overture with the miracle of the lights. Our Sages knew this was not just a one-time miracle. Hanukah would be a constant reminder that despite the darkness, with our holy brazenness we can always find a way to light up the night.

A different version of this article appeared in Mishpacha magazine.