It's a Sin to Waste 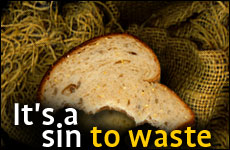 For some survivors, the war was never over.

My mother had many peculiar habits.

Whenever we would go out to eat at a restaurant, at the end of the meal she would make a little assembly of the leftover rolls, meat and vegetables, wrap them up in a napkin or a handkerchief
and put them in her purse. I was very young then, 11 or 12, and didn't understand this odd behavior. When I would ask her why, she would respond, "It's a sin to waste."

My mother didn't talk much about the Holocaust when we were young, probably because she knew we wouldn't understand, and to protect our tender emotions. When I was in my mid teens, things changed, and she began to tell us what had happened to her as a child.

She was 11 when the Germans came. She was in school when she heard shelling and explosions. A shell hit the school house, setting it aflame. A teacher was dropping her and the other children from the second floor to the ground below, when she fell on a flaming ember that
burned her knee badly. It would take months to heal. I recall the scar on her right knee even when she passed away in 1997. It was very pronounced, very large.

The Germans came and took the children away. My mother was one of five children, and was entrusted with the care of her younger brother Eli, who was in the same school house as she that day. A young German soldier was screaming "Mach Schnell! Mach Schnell!" in order to hasten them out of the bed of the truck. The soldier became so frustrated, he grabbed my mother by the arm and threw her to the ground, causing the arm to break. She was then sent to a temporary interment camp in Germany until the Nazis would decide her fate.
Eli quickly became sick with Rheumatic fever, and was sent to the crematoria before her eyes. She would often cry over that. He was her responsibility. She loved Eli dearly, and in some odd way felt it was her fault that he died.

She survived the Nazi's "selection process" (my mother had sandy brunette hair and blue eyes, and was thus termed "salvageable" by the camp guards), and she was not sent to a death camp. Her long hair was shorn; she was stripped naked and deloused with DDT powder. The children's hair was sent off to make felt socks for U-Boat crews.

She was then sent to a work camp near Leipzig where she would spend the remainder of the war cleaning herring and chopping onions. Eating any of the fish was strictly punishable by instant death, and she saw many young girls die that way.

She was resourceful. She would crawl inside of the huge wooden barrels they were shipped in, and nibble a little piece hidden within. She would take a little piece of fish and wrap it up in a piece of paper and hide it in her dress. She made sure never to eat too much, since the guards would know she was stealing and would shoot her.

The women guards were the most brutal. They would routinely throw children to the ground and beat them. The male guards, mostly regular Wehrmacht, would make attempts at kindness. An older guard used to bring her mittens in the winter time, and stroke her blond hair, while saying "schon, schon" (beautiful, beautiful). She feared and despised him.

During 1944-1945, the Americans and British Air Forces bombed nearby Leipzig day and night, the sound of the horrific bomb blasts shredding both mind and body. The air raid sirens sounded their constant mournful wail for months, until the Germans gave in and the war was over.

Life in the barracks was abominable. Each child was given a thin blanket, which she would have
for the next four years. It would get freezing cold in winter. One night my mother wished the girl sleeping next to her would die so she could steal her blanket. In the morning the girl was dead, and her blanket was gone.

There were humane moments too. When she had her first menstrual cycle, she was terrified, and a kind, older girl named Anna eased her fears and showed her how to contend with it. She and Anna both survived the war and would remain friends until her death. Anna died in 1994.

Whenever there was a thunderstorm, my mother would scream with each boom of thunder and
flash of light.

The food they received was a gruel of turnip tops, potato skins, and other kitchen offal
along with rotten pumpernickel bread, which "was gooey and moldy and filled with worms." She would hold her nose and eat quickly. If any of the girls died, she would steal their food and wrap it up in a little piece of paper and hide it in the barracks.

She was rescued in 1945 by the Russians.

She remembers the smiling, deeply compassionate Russian soldiers. When they found her she was a mere skeleton, covered in lice. They gave her food, clothing, and medical care. She was later turned over to the Americans. She spent the next four years in Salerno, Italy baking bread, eventually making her way to Manchester, England where she was asked if she would rather go to Australia or America. She chose America. The English hated her. They had their own to look after.

She married my father in 1955, and I was born in 1961. As I grew older, I began to understand.
Whenever there was a thunderstorm, my mother would scream with each boom of thunder and
flash of light. She would curl up in a fetal position in bed and cover her ears with pillows. When our city hall would test the tornado siren once a day at noon, she would freeze and look at the skies. The storms triggered a flashback to the bombings.

When I would help her peel potatoes, she would yell if I cut the peel too thick. On occasion she would even break into tears, repeating, "No, no! It's a sin to waste! It's a sin to waste!" Today I am quite the champion potato peeler.
Growing up with my mother was complex. She was deeply compassionate toward me and my brother, and spoiled us rotten. She wanted us to have the childhood that was stolen from her. She had a ability to sense and cure the suffering of others.

My mother passed away in my arms from a brain aneurism on October 22, 1997. She was sick for decades due to the horrid diet in the camps and the scarring on her heart tissue caused by Typhus and Rheumatic Fever.

For her, the war was finally over.

Jewish Women on a Train