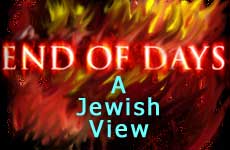 As we enter the last month of the 20th century, expectations about the next millennium have reached a fevered pitch.

The release of a new movie, End of Days, starring action hero Arnold Schwarzenegger, is Hollywood's attempt to jump on the bandwagon, and capitalize on the expectation of what awaits the world after December 31, 1999.

The film is set in New York in December 1999. Schwarzenegger, who plays an ex-cop, finds himself unwillingly in the forefront of the cosmic struggle between good and evil as the forces of darkness run wild in New York. (Some would argue that Mayor Guilliani has played a similar role!)

The background to this Hollywood extravaganza depicting the final showdown is explicitly based the Christian concept as explained in the Book of Revelations, the final segment of
the Christian Bible:

The whole scenario is the backdrop for the final cataclysmic struggle between God and Satan, which will ultimately result in the victory of good over evil and the final redemption
of humanity.

To find out what happens, you'll have to go see the movie. To find out the Jewish perspective on the millennium, just read on.

While there are certain similarities between the Jewish and Christian concepts of redemption, there are also major differences.

The first and most important point is that while all three monotheistic faiths have a concept of Messianic redemption, the idea originates in Judaism.

Judaism first introduced the idea of an all-powerful God who acts in history, transforming history into a controlled process that leads to a destination.

What's the destination? The Garden of Eden. In other words, at the end of history we will return spiritually and ethically
to where we came from.

The Jewish idea of redemption is synonymous with all humanity living together in peace and brotherhood, in a close spiritual relationship with the infinite Creator of the universe.

The significance of the millennia -- a one thousand year period -- is specifically Christian, and has no real relevance to Judaism, yet Judaism does give a time frame, or a deadline, so to speak, for the final redemption. [See Talmud-Rosh Hashanah 29:a]

Jewish tradition teaches that the Messiah will have to come by the year 6,000 of the Jewish calendar (we are currently in 5760 so we have a maximum of 240 years left), but it doesn't preclude him coming prior to that date.

(Incidentally, the Jewish definition of the Messiah is a leader, descendent of the royal family of King David, who will bring all the Jewish people back to Israel, rebuild the Temple, and ultimately lead all humanity back to the ideal state.)

Within the Jewish prophetic tradition there is also the notion of trials, tribulations and even cataclysmic struggles prior to the redemption:

But there are significant differences between the Jewish
and Christian versions of the apocalypse.

One huge difference is the concept of Satan. This idea also originates in Judaism, except that Satan in the Jewish tradition is an accusing angel, a sort of cosmic prosecuting attorney acting entirely under God's control, who gets on the
Jewish people's case when we stray from our historic mission.

The dualistic notion of a powerful anti-God figure who fights with God for the destiny of the human race is a Christian idea (possibly originating in Zoroasterianism, the dominant religion in the Middle East at the time of the founding of Christianity.) It is entirely unacceptable to Judaism.

Judaism teaches that there are no competing powers. God is completely in control.

Another significant difference also stems from the Jewish
understanding of prophecy.

From the Christian perspective the doomsday scenario is more or less inevitable. The Jewish perspective is very different.

Judaism teaches that all "good" prophecy will eventually come
true. When? That depends on our actions -- we can either hasten or delay the Big Day depending on how we behave. "Bad" prophecy, on the other hand, is a warning. It's God's way of telling us to get our act together or else…

So, in a nutshell relax, don't panic, the world won't end on New Year's Eve (although on the morning of January 1st, after too much champagne, some of us may wish that it had!)

From the Jewish perspective we're not off the hook. That great day will come, and we Jews pray three times a day for it to come soon. When will it happen? How will it happen? That all depends on us.

Who is the Messiah?

The Messiah in Judaism

All About the Messiah

Understanding the Sacrifices
The Softball Player
How This 6 Generation Bread Baker Brought Back Israel’s Ancient Grains
Olivia Newton John’s Grandfather was a Nobel-Prize Winning Jewish Physicist
Comments
MOST POPULAR IN Land of Israel
Our privacy policy
Aish.com Is Looking for Great Writers