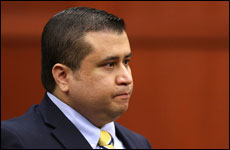 It’s not easy to have the humility to say we don’t know.

When George Zimmerman shot Trayvon Martin on February 26, 2012, I like most of the United States, had very strong feelings.

The case – which seemed to pit so many different groups together, and which touched on hot-button issues like guns, neighborhood watch groups, and racial profiling – seemed custom-made to provoke the most anger and acrimony possible. Now that George Zimmerman has been acquitted, the debates seem even more personal and bitter.

Certainly, the issues this case brought out ought to be debated. But perhaps it’s time to do so without the framework of the Zimmerman trial: to let this particular legal proceeding go. In the moments after the verdict, my inbox started getting the first messages – each one sure it was right, and each certain that the writer knew much more than anyone actually working in the courtroom.

It brought back a memory from years ago, when I was a juror on an attempted murder trial. The trial was almost overwhelmingly complex: there were two victims, six charges, and a complicated trail of events to consider. I was a Ph.D. candidate at the time, but I remember thinking vividly that the conversations I had in that jury room were the most demanding, the most important, the most intricate, and most intellectual I’d ever had.

No matter how many times we went over the evidence, the fact remained that we weren’t completely sure they had committed the crimes.

We took our job seriously, and wanted to be sure. Around and around we went in that jury room. No matter how much we talked about it, no matter how many times we went over the evidence, the fact remained that we weren’t completely sure our defendant had committed the crimes. Sure, it looked as if he might very well have. But were we sure? No. After hours of deliberation, we finally reached our verdict: not guilty on the most serious charges.

I went home that night, exhausted, and in the ensuing days and weeks told people about the trial. To my surprise, my most common reaction when I recounted my experiences as a juror was anger: people told me they would have done it differently; I should have found him guilty; I should have found him innocent. (We reached a mixed verdict: guilty on some counts, innocent on others.)

I was amazed that so many people seemed so certain they were right. If I pointed out that I was the one who had sat in court, listening to all the evidence, and they hadn’t, people merely brushed me away as if it was unimportant. When I pointed out that a life hung in the balance – that we had to be sure beyond a reasonable doubt – people tuned me out. They had their thoughts, and nothing was going to change their minds.

In the late 1990s, two psychology researchers, Christopher Chabris and Daniels Simons, made a short video of people passing a basketball back and forth. They asked people to watch it, and count the number of passes. Afterwards, they asked how many passes the viewers had observed.

If you want to try it yourself, you can at www.theinvisiblegorilla.com. (Don’t read ahead until you do, because there is something surprising below.)

After asking about the number of passes, the researchers had one more question: had the viewers noticed a woman wearing a full-body gorilla suit wander onto the court, beat her chest for a few seconds, then wander off? Shockingly, half of all viewers missed the gorilla entirely: they were so focused on counting passes they never saw her.

It’s easy to be so fixed on one view that we fail to see the whole picture, to be sure of ourselves even when the evidence doesn’t necessarily support our conclusions. As the Zimmerman trial concludes, I – like people across the United States – am saddened by the entire tragedy.

Thousands of years ago King David wrote that there are times when God looks at corrupt laws and asks in anguish “How much longer will you enforce violence in your judgment, and respect the persons of the lawless?” (Psalms 82:2)

At those times, God asks us not to look outside ourselves for justice, but to create justice within our societies. “Help him who has been brought low and the orphan to obtain their rightful due” God demands: “and proclaim the right of those bereft of wealth and station” (Psalms 82:3).

We each have a responsibility to elect officials who will maintain our systems of justice, who will ensure they are fair and impartial. That is our role as citizens. And then, at times, even during the most difficult and controversial of cases, part of promoting justice and fairness is letting courts do their jobs: part of giving the accused their “rightful due” is admitting that at times, we might not know the whole picture.

A Tale of Two Crypts
Vayelech 5783: Regret and Repent
Rabbi Sacks: Focus On the Important, Not the Urgent
Put Your Foot Down: Are Human Feet Poorly Designed?
Comments
MOST POPULAR IN Current Issues
Our privacy policy
Aish.com Is Looking for Great Writers