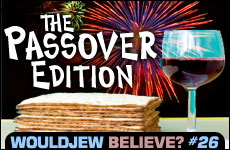 What’s the story behind the famous Maxwell House Haggadah?

Passover is, hands down, my favorite holiday. Not only is its message of freedom and hope inspiring, but it remains contemporary – as unfortunately we still see evidence of anti-Semitism, and threats of extinction. On a more sanguine note, Passover rituals (despite arduous prep, and the hunt for stray chametz crumbs) are the stuff of lifelong precious memories. Who can forget the first time we heard our little ones recite "Ma Nishtana" while standing precariously on a chair? So it’s with great joy that I bring you WouldJew Believe: The Passover Edition.

For thousands of years the “Haggadah” of Passover, which means “the telling,” was spread by word of mouth. The modern Haggadah originated in the Mishnah in tractate Passoverim. The earliest written, was produced in 13th century Spain. Today’s Haggadahs contain ritual, legend, prayers, blessings and songs.

One of the most famous and popular of all time was the Maxwell House coffee Haggadah, published in the 1930s by General Foods. But more — the genius behind the Maxwell House Haggadah, was New York Jewish ad-maven Joseph Jacobs. As the story goes, non-Jewish salesman Joel Cheek peddled coffee from his saddlebags in Tennessee. When Cheek hit the eastern market, it was Jacobs who, upon clarifying that coffee beans were berries, and therefore not forbidden on Passover, encouraged Cheek to sell his product in independent Jewish stores. Cheek established such a strong connection with his Jewish customers that in the 1930s the company started producing and distributing Haggadahs, named of course, for its sponsor: Maxwell House!

Picture it! Passover, 2003. The place? A former Buddhist temple in Korea, now the U.S. Army's Religious Retreat Center. The event? One of the most far-off (and far out) Passover celebrations in the world, led by the Army’s only Jewish chaplain on the peninsula at the time, Rabbi Ehrenpreis, whose congregants consisted of about 150 soldiers, diplomats, businessmen, and Koreans. The price of shipping kosher foods for the two Seders was a hefty $5,000! The Seders were filled with matzah ball soup, gefilte fish and Empire turkeys. But perhaps more interestingly, the Jewish Telegraphic Agency reported that the Seder included an impassioned rap version of Who Knows One.

For Jewish Union soldiers fighting in the Civil War, the Passover parallels must have been especially personal and powerful, as with Jews deployed anywhere in the world fighting on behalf of freedom. Here is an excerpt from the diary of Union soldier J.A. Joel:

In 1861 I became attached to the 23rd Regiment destined for West Virginia. Twenty of my coreligionists were united to keep the holy days. Our next business was to buy matzos. The morning of Erev Passover, a train arrived with seven barrels, plus Hagadahs. While a party built a log hut for services, others foraged for cider, a lamb, chickens, eggs, and a weed [in lieu of bitter herbs]. For charoses, we used a brick. In the wild woods, we offered God our prayers and sacrifice. I doubt whether our forefathers looking down on us, standing, ready for an attack. faithful to our God and our cause, would have imagined themselves amongst mortals, enacting this commemoration of the scene that transpired in Egypt.

When the Nazis intended to deport the remaining 60,000 Jews from the Warsaw Ghetto on Passover Eve in 1943, the Jews had planned an armed uprising under the leadership of Mordecai Anielewicz. On the third day, SS General Juergen Stroop burned the ghetto. Anielewicz was killed on May 8. On May 16, Stroop ordered the Great Synagogue on Tlomacki Street destroyed.

Stroop wrote: "Over and over, we observed the Jews preferred to be burned alive rather than being caught by us." The Germans planned a three-day victory. But the ghetto fighters held out for more than a month.

The Seder Words of the Warsaw Ghetto Before the Final Uprising, 1943

Passover has come to the Ghetto again.
The lore-laden words of the Seder are said.
And the Cup of the Prophet Elijah awaits.
But the Angel of Death has intruded, instead.
Who shall live, who shall die, this Passover night.
But no more will Jews to the slaughter be led.
The truculent jibes of the Nazis are past.
And the lintels and doorposts tonight will be red
With the blood of free Jews who will fight to the last.


Passover Prayer During The Holocaust

In Bergen-Belsen concentration camp there was, of course, no matzah with which to celebrate Passover. In 1944, the rabbis, in observing the exclusion that one could break the laws to save his or her life, deemed leavened products could be eaten. They designed a special prayer for this tragic occasion:

Our Father, it is known to You that it is our wish to do Your will and to celebrate Passover by eating matzah and not eating chametz. But our heart is pained because our enslavement prevents us and we are in danger of our lives. Behold, we are ready to fulfill Your mitzvah: “And you shall live by My laws, and not die by them.” We pray to You that You may keep us alive and redeem us soon so that we may observe Your laws with a perfect heart. Amen.

“Next Year in Jerusalem”

These words traditionally conclude the Passover Seder, referring to the coming of the Messiah and our complete spiritual redemption, represented by Jerusalem. For some, the meaning is also more literal:

Former Secretary of State George Schultz did much to help imprisoned Jewish Soviet dissidents. He recalled participating in a Seder in Moscow in 1987 with refuseniks, including Ida Nudel, Josef Begun and Vladimir Slepak. According to author Tim Boxer, Schultz felt the zenith of his career was a phone call from Ida Nudel – from Jerusalem.

All You Ever Wanted to Know About Golems

Not Your Typical Nice Jewish Boy
Don’t Believe in Other Gods Versus God is One
Seeing Without Eyes
Why Shouldn’t We Eat Whatever We Want?
Comments
MOST POPULAR IN Jewlarious
Our privacy policy
Aish.com Is Looking for Great Writers