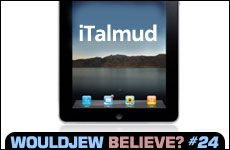 Everybody’s doin’ it! They’re walking palm-first, communing in earnest with their window to the world: the iPod (iPad and all the other “i’s.”) Never to be forgotten, We Jews are being tempted with gazunta apps, and I’m not talking chopped liver. So, here are some yummy Apps with Jewish tude.

iTalmud: Feel the need to debate, even with yourself? The Talmud is now electronically accessible. No excuses for not studying!

iSiddur: This prayer book also features location-based prayer times! No more when is Maariv, even in outer space. (And no more Jewish outer space jokes!)

Totally Tanach: Browse, search and study the Hebrew Bible any time, any place. You can even get a Rashi Commentary to help you resolve your iQuestions.

Get a Rashi Commentary to help you resolve your iQuestions.

Tanya: Hear the Alter Rebbe’s words and be uplifted. (But keep your eyes on the road.)

iBless Food: My personal favorite, this hendy-dendy app remind you of the correct blessing. What could be more important than thanking the Almighty? Right -- if it could only remind you

to thank our mothers. Now that would be something!

What do you do if your hockey team “farshtoonks,” you’re in the Sunshine State, and you want MOTs to maybe buy a ticket? According to Neil Rubin, editor of the Baltimore Jewish Times, the Florida Panthers tried to break the ice in December by holding what they called “The Biggest Hanukkah party in South Florida!” More than food and music, the team offered an incentive. If you bought a (discount) ticket, you were gifted with a fan “beanie.” Did it work? Eh ... not so much. Could it be the Jews of South Florida already have enough yarmulkes? Or could it be there aren’t enough MOT fans to start a mini Panthers blog? Which, of course was the reason for the giveaway in the first place. Oy! Better they should have Yiddishe kops than give Yiddishe Kippahs.

Recently a group of tourists in Israel went on a pilgrimage at the pristine cemetery of Ramle. Their mission? To find the tombstone of Hogwarts’ most illustrious student, the bespectacled Harry Potter. After much investigation, and a little hocus pocus, there it appeared among 4,500 graves! Photos were duly snapped as “Potters” huddled around the burial site of their hero. Or not? It really is Harry Potter’s grave. Just not that Harry Potter’s grave. This Harry Potter, age 18, was a British soldier, felled back in 1939, while on duty when Britain held the League of Nations Mandate for Palestine. Are the tourists getting wise? Probably. But, the tour guide, Ron Peled said the name sells. Galloping Gargoyles!!

What is it about the chick pea that incites such militant mishegoss? OK, yes, as a beloved ethnic treat on both sides of the Middle East aisle, it’s served up as a metaphor for larger conflict. And the conflict was played out in December at Princeton University where the world watched and logic prevailed! The pro-Palestinian Princeton Committee on Palestine (PCP) called for a referendum of the student body to ask university retail outlets to provide an alternative to Sabra-brand hummus. Seems simple, nu? An exercise in consumerism? A hummus op for other manufacturers? Ah, but Princeton students had the saichel to realize there was more to this than free hummus choice. You see, the Sabra people donate funds and services to soldiers in the elite Israel Defense Forces Golani brigade, which irked the PCP who charged that the Golani brigade routinely violates human rights and international law. The referendum was handily beaten, 1,014 to 699! A strong show of support for hummus (our way) and Israel!

FILE UNDER ROTTEN IDEAS? OR NOT?

Anyone in South Florida who ever said, “Get me a lawyer. Shhhh. A Jewish one” can now say it aloud, and dial. A new Boca business, the Jewish American Bar Association, promises to refer a bona fide Jewish mouthpiece, or, according to found Lisa Spitzer, a gentile, “if his heart was in accordance with our goals and purposes.” (Whatever that means.) While the prospect may entice some clients, some in the legal community, Jewish and not, are underwhelmed, even offended, though probably for different reasons. This begs the questions: Do Jewish lawyers have the “chutzpah” edge or is this a you-know-what stereotype? And, much like the difference between loving Irish stew vs. Irish bartenders, is the stereotype a “compliment” or a klop? The jury is still out. You be the judge.

AND WOULDJEW BELIEVE: FESTIVUS FOR THE REST OF US??

Who can forget the Seinfeld episode when George, to get out of Christmas-gifting, tells his boss, he celebrates “Festivus.” Listen ...

GEORGE: "I was afraid that I would be persecuted for my beliefs. They drove my family out of Bayside, Sir!?"

Well, one convicted drug dealer in an Orange County California prison, not only didn’t forget “Festivus,” he celebrates. Malcolm Alarmo King reportedly cited his observance of Festivus to eat kosher in prison! King, more of a “healthest” than a “Festivest” needed a religious reason to get the kosher meals, which are supersized. A local Bayside paper claimed he got his wish, even after thorough investigation revealed the “holiday” was a figment of the Costanza mishegoss. All of which begs the question: Did the Costanzas eat Kosher on Festivus? Or even, what were the Costanzas? Mama C was Jewish, hands down. (The house smelled like kasha.) But papa Frank? We saw his cousin in Italy. Maybe he was Sephardic? But then George joined the Latvian Orthodox Church. Did he ever re-convert? Is George a “re-Converter?” And if so, to what? And ... never mind.

Famous Jews and Their Pen Pals

The Matisyahu of Stand Up Comedy
Vayelech 5783: Regret and Repent
Rabbi Sacks: Focus On the Important, Not the Urgent
Put Your Foot Down: Are Human Feet Poorly Designed?
Comments
MOST POPULAR IN Jewlarious
Our privacy policy
Aish.com Is Looking for Great Writers