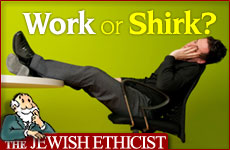 A shirking partner must bear the consequences.

Q. In a recent column you made a distinction between unequal effort and unequal contribution in a partnership. What is the meaning of this distinction?

A. Recently we discussed a situation in which two partners agreed on a division of labor, based on the partners' respective talents, and on a division of profit, which was half and half. Each partner continued to satisfactorily fulfill his duties under the agreement, but as things turned out one partner's talents and abilities ended up making a much greater contribution to the profitability of the firm. This is just the way of the world; one reason people make partnerships is precisely to be able to take advantage of this kind of serendipity – in a partnership you have twice the chance to make it big, even though you may have to share your good fortune with someone else.

But when one partner actually shirks his responsibility under the agreement, that is another matter altogether. The breach of the agreement certainly requires some adjustment of the originally agreed upon division of earnings.

This situation is discussed in the Talmud:

[The sage] Samuel stated: a partner is considered one who enters with permission.(1)

The explanation, as is made clear later on in the passage, is as follows: Anyone who enters his neighbor's field and does some useful work is entitled to some recompense. This is the doctrine of "one who enters without permission", which is roughly parallel to the common law rule of "unjust enrichment" – it is unfair for the landowner to benefit from the efforts of the worker without paying anything at all. But it is evident that such a worker, who enters on his own initiative, can't dictate his own terms of payment. He has the lower hand in receiving payment; he gets either the accrued benefit or the usual wage, whichever is less.

But when a partner does more than his fair share, it is considered that he has permission. In that case, his recompense is what is customary for a sharecropper, who is usually the party to take care of someone else's field. A sharecropper gets not a fixed wage but rather a share of the crop. In this case, the two partners would first settle on the recompense for the extra work – the "overworking" partner would draw his share as a sharecropper -- and afterwards the two split the remaining profits.

A somewhat similar situation is discussed in a responsum of the Rashba (Rabbi Shlomo ben Adret), a prominent early authority. The Rashba discussed the case of three partners who agreed they would each contribute working capital for a store and all work together in the store, but in the end one of the three barely worked at all. (It turned out he was busy in his own store!) The Rashba writes that the partner had no right to shirk, and is not entitled to his share of the profits. (2)

One interesting question discussed by many later commentators is, what is the difference between these two situations? Why in the case discussed in the Talmud does the "overworking" partner get extra, whereas in the case of the Rashba it is the "underworking" partner who gets cut out? We could imagine that in that case he would have to pay the other partners for the extra work from his share of the earnings. Perhaps in the first case all the work was really done and profits were normal; the only adjustment that needs to be made is for the shirking partner to pay the hard worker for the effort that restored matters to normal. Whereas in the second case the work was never made up and profits suffered; so there was really nothing to distribute. Or perhaps in the first case one partner was perfectly happy to pick up the slack, as long as he knew he would get paid, whereas in the second case the partner acted unilaterally and thus forfeit his right to his share.

The principle is however the same: If one partner actually shirks his responsibilities under the partnership agreement, he is not entitled to his share of the profits as if nothing happened. An adjustment has to be made to make sure the working partner is compensated for the extra work or the lost profits.