Women on the Bus 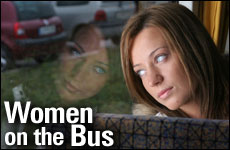 I know I am supposed to feel like a repressed, suppressed, oppressed and perhaps depressed victim. But what if I don’t?

An acquaintance of mine who writes for a secular women’s magazine here in Israel called to ask if I would be willing to be interviewed about the hot topic of the day.

“Would it be okay if my ‘real voice’ says something else?” I asked her via e-mail.

I wonder if she was aware of the irony of her response when she wrote me back, “We don’t want slogans. We want the truth!”

So what is the truth? I know I am supposed to feel like a repressed, suppressed, oppressed and perhaps depressed victim of a patriarchal leadership, relegated to the back of the bus by bushy-bearded, black-coated, wild-eyed fanatics. But what if I don’t? As a card-carrying haredi woman, living in the heart of haredi land, who spends a good part of her week teaching Jewish thought to hundreds of secular Israeli university students, I often feel slightly schizophrenic – as if I have a foot in two worlds.

And like anyone else who moves between different cultures, I have discovered that what you see from here, you can’t see from there. Wearing one’s own glasses to view another’s value system never works.

So I wasn’t surprised by her assumption that this was the way I would view things – from her perspective, it made perfect sense. But I wonder if it would have been okay with her if my “real voice” saw not the haredi woman, but femininity in general, as being “pushed to the back of the bus”?

Men and women often differ in how they view the male/female dynamic. Women seem to prefer that the physical relationship mirror and express a deeper emotional or spiritual bond. We also like commitment, preferably sooner rather than later. Women, perhaps annoyingly to some, seem to hear the uncommitted guy saying, despite professions of love: I want to leave the back door open in case someone else comes along who makes me happier than you.

Men, on the other hand, are more likely to be able to enjoy a purely physical connection without any emotional relationship at all (or as one of my students said, forget about a relationship – how about just knowing my name!)

This may be borne out in the postulation in Jewish mysticism that the physical world parallels the spiritual one. Male organs are external; women’s are internal. The woman literally incorporates the experience into herself; the man has the ability to externalize the experience entirely, and can leave his “self” out of the picture.

So what does a woman do with these inconvenient desires for exclusivity, commitment and an in-depth relationship, in a world where this is viewed at best as quaint and naïve and at worst as a sign of sexual repression? The answer is that she buries them deep inside her and steps out to negotiate in a man’s world. The last thing she needs is to be viewed as “hung up.”

In a world that grants legitimacy only to a male perspective, a woman quickly realizes that she had better stop her incessant demands, and (to paraphrase Henry Higgins) just be more like a man.

In fact, it is the woman who is cool with the “new monogamy,” who also has her “male trophies” dangling at the end of her leash and who has no interest in settling down, who is often idealized as the truly liberated, modern woman. Finally – here is someone who has been released from the shackles of a society that has been squelching her all these years by telling her that all a woman wants is love and intimacy.

Hurray! Finally she can tell the truth – what she really wanted all along was a hook up!

I will never forget how incensed one of my students was when another woman in the class proudly told us how she never gets involved emotionally in these relationships.

“So what do you want us to do?” this student said. “Stand up and applaud? Why aren’t there any men around here boasting that they are just like women and can’t handle a relationship without having a deep, personal relationship first?!”

There are many ways of being controlled, and having your basic desires suppressed is one of them. The ancient curse, “And he will rule over you,” seems to describe modern reality – it’s a man’s world, and she better get with the program.

But a curse is not a good thing. The goal is to return to a world of unity and love. Hopefully we are on a slow and steady progression to a time of perfection, where the curses will no longer apply.

So who is supposed to keep us on track? Whose is the voice that speaks of internality, of depth, of love and of intimacy? It may be the woman, but who is listening?

Jewish law seems to identify the female perspective on relationships as the ideal, and sets up a program to bring men closer to that perspective.

Interestingly Judaism is. In a fascinating dynamic, Halacha (Jewish law) seems to identify the female perspective on relationships as the ideal, and sets up a program to bring men closer to that perspective. The Halacha of guarding one’s eyes teaches him about exclusivity. The ketuba teaches him to take responsibility and be committed. The on-again/off-again cycle of taharat hamishpaha (ritual purity) helps a couple to develop an emotional bond, as well as providing a framework to keep the magic and excitement in the marriage. What she may naturally know, he acquires through discipline.

Allowing the female perspective to influence society has huge ramifications. Kate Bolick discusses this in an article in Atlantic magazine.

“In societies where men heavily outnumber women,” she writes, “women are valued and treated with deference and respect and use their high dyadic power to create loving, committed bonds with their partners and raise families. Rates of illegitimacy and divorce are low.”

While Bolick hooks women’s influence to demographics, there are other ways to make sure that society grows in the direction of internality and love toward which the female voice has traditionally pulled.

It is definitely not okay to harangue a woman who chooses to sit in the front of the bus, but this is not about subjugated women waiting for a Rosa Parks.

One way is by courageously facing what happens to us all when we trivialize the ramifications of loss of sexual propriety. The stakes are very high – for us, for our relationships and for society at large. Staying true to that feminine voice isn’t easy in a world that negates it, or worse, ridicules it as unattainable. But Halacha helps, and sometimes social structures do, too.

Giving expression to this vision requires commitment and discipline. Men who subscribe to this will be limited in where they can go, what they can do (and to whom they can listen). Notably, haredi men, with their long coats and jackets, tend to dress even more modestly than haredi women do, perhaps strengthening the thesis toward the feminine perspective of internality.

Is having women sit in the back of the bus the best safeguard for this vision? That is certainly debatable. But it is a conscious debate being carried on within a society that subscribes to a particular value system – and in which people are not interested in being squished together with the opposite gender on a bus ride.

It is definitely not okay to harangue a woman who chooses to sit in the front of the bus, but this is not about subjugated women waiting for a Rosa Parks to liberate them from a chauvinistic, patriarchal leadership. This is about men and women on the same team – struggling to maintain a connection with their higher selves.

Why Being an Orthodox Jewish Mom Makes Me a Better CEO

As a Woman, Finding My Voice

Rocking My Crown: Highs and Lows of Covering My Hair

Cleaning Queen
Scientific Curiosity and the Divine Encounter
Mind Over Milkshakes
Love the Convert
Comments
MOST POPULAR IN Current Issues
Our privacy policy
Aish.com Is Looking for Great Writers