Wistrich on "The Left, the Jews and Israel" 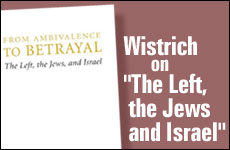 Why so many Jewish socialists abandoned their people and heritage.

Robert Wistrich, Hebrew University professor of European and Jewish History and director of the Vidal Sassoon International Center for the Study of anti-Semitism has just published his 29th book titled "From Ambivalence to Betrayal: The Left, the Jews and Israel".

It is an impressive tome of over 600 pages and follows his monumental seminal work "A Lethal Obsession: Anti-Semitism from Antiquity to the Global Jihad”, published in 2010 and now recognized as the definitive work on the world's oldest hatred and an indispensable text for scholars.

In a fascinating preface to his new book, Wistrich provides a brief autobiographical sketch. His father had originally been a supporter of the illegal Polish Communist Party in pre-war Cracow but became alienated from Stalinist communism after being arrested by the NKVD. He and his wife, who had experienced bitter Polish anti-Semitism, survived the Holocaust by fleeing to Kazakhstan where Robert was born.

Wistrich was educated in England, and to use his words, was “radicalized” in grammar school and later at Stanford University. He first visited Israel in 1961, returning in 1969 when he was appointed editor of the left wing Israeli journal, New Outlook. However his passion for the Jewish State led to a parting of the ways with the Israeli far left. Robert became increasingly engaged in academic scholarship related to anti-Semitism, received a senior appointment at the Hebrew University, and is now recognized as the world’s foremost scholar in the field.

From Ambivalence to Betrayal is an historic review and analysis of the abandonment of the Jewish people by the left from the early 19th century until the present. It also relates to the extraordinarily disproportionate number of socialist thinkers and leaders who were of Jewish origin and seeks to explain what motivated so many of them, in the course of their utopian and futile efforts to ‘repair the world’, to abandon their people and their heritage and frenetically seek to deny their kinsmen the right to self-determination.

The introductory essay is a brilliant overview of the contemporary Jewish political arena viewed in the context of the concurrent rise of Zionism, Communism, anti-Semitism and Nazism. It focuses strongly on the hypocrisy of the existing left which has become obsessed with demonization and delegitimization of the Jewish state. Wistrich demonstrates the extent to which today’s radical anti-Zionists, despite purporting to represent the left, often share the identical obsessions and delusions concerning the alleged malignant influence of the Jews in the modern world as classical fascist anti-Semites.

Wistrich provides fascinating and innovative insights on left-wing revolutionaries. He skillfully relates the connection of “the prefigured 19th century seabed of anti-Semitic socialism found in Marx, Fourier and Proudhon, extending through to the orthodox Communists and “non-conformist” Trotskyites to the Islamo-Leftist hybrids of today who systematically vilify the so called racist essence of the Jewish State”.

His analysis of the linkage of these revolutionaries with the left's contemporary abandonment of Israel is a major intellectual and scholastic achievement and provides an intriguing insight into the sources of the far left’s current application of double standards and anti-Israel venom.

Trotsky was ultimately forced by Stalin into assuming the traditional Jewish role in society: the reviled scapegoat.

His chapter on Leon Trotsky, entitled ‘A Bolshevik’s Tragedy’, is a masterly essay which breaks new ground on this extraordinary charismatic Jewish revolutionary who desperately sought to repudiate his Jewish origins. Yet, despite achieving the reputation of being “the most intransigent of revolutionary Bolsheviks”, Trotsky was ultimately forced by Stalin into assuming the traditional Jewish role in society and became reviled as the scapegoat for the failures of the Revolution.

Wistrich highlights the fact that many of today’s anti-Jewish Jews inherited the mantle of the 19th and early 20th century anti-Semitic Jewish radical revolutionaries. Yet he stresses that these renegade Jews have vastly exceeded the anti-Semitic tirades of their predecessors and even to the extent of allying themselves with reactionary clerical zealots and Jihadists, who represent the antithesis of their purported world outlook.

He points to their public support and endorsement of terrorists and religious fanatics, noting that even the most extreme early anti-Jewish revolutionaries like Marx, Engels, Kautsky, Rosa Luxemburg or Trotsky “would never have remained silent about sharia law, censorship, female genital mutilation, honor killings, suicide bombings, or making the world safe for Allah’s rule” and rarely resorted to outright racist outbursts like their current successors”. Nor would they have gone to the extreme of allying themselves with those explicitly committed to our physical destruction.

Wistrich asserts that Holocaust inversion, now a major component of the Left’s effort to besmirch Israel, whilst initially introduced by British historian Arnold Toynbee who referred to Zionists as "disciples of the Nazis”, was in fact institutionalized as the “Zionist-Nazi” nexus at the Prague Trials orchestrated from Moscow.

He reminds us that it was post war Jewish Marxists who encouraged the left’s current paranoia and “anti-racist” racism against Israel. As an example he quotes the Polish born Jewish biographer of Trotsky, Isaac Deutscher, who already in 1967 described Israel as the "Prussia of the Middle East" and a bastion of “racial Talmudic exclusiveness and superiority".

It was the Soviets who, in 1975, succeeded in passing a UN resolution bracketing Zionism and racism. Whilst this was ultimately rescinded in December 1991, it remains today the central plank in the Arab-Leftist efforts to criminalize Israel and brand it as a state engaging in war crimes.

The concluding chapters review the anti-Zionist myths, many of which seem to have been directly replicated from Nazi propaganda and are today enthusiastically promoted by the Marxist Islamist alliance who regard Israel as the "Jew of the nations" fulfilling a dark preordained fate as an eternal scapegoat.

Wistrich relates to the quasi-religious belief of these groups that “the world will only be “liberated” by the downfall of America and the defeat of the Jews. This chiliastic fantasy has today emerged as a notable point of fusion between the radical anti-Zionist left in the West and the global jihad. Revolutionary anti-Semitism has become an increasingly important factor in cementing the anti-capitalist populism much as it was during the birth pangs of modern socialism over 150 years ago.”

This is a magisterial work, providing a comprehensive understanding of the origins of the most pernicious challenges currently facing the Jewish people, especially those originating from the enemy within. It will be especially valuable to those directly engaged in the struggle to neutralize the evil efforts against Israel by the left-Islamic alliance and its acolytes of Jewish origin.

Star Trek and God
In the Shadow of David and Goliath
Where Do the Laws of Nature Come From?
Saadiah Gaon, Rashi and Maimonides: How Three Rabbis Revolutionized Judaism
Comments