Winking at the Angel of Death 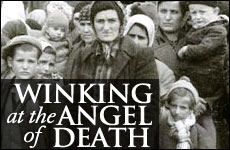 She first met him in the ghettos. Now she had only a few minutes before he’d finally reach her.

As the Angel of Death brazenly sauntered closer, she had the bizarre urge to give him a high five. After all, they were buddies, of sorts.

She had met him 64 years ago in the ghettos, yet had managed to evade his outstretched, skeletal arm.

She knew that this time around, they would become better acquainted.

But she had a few more minutes before he would reach her.

Although her eyes were closed and she appeared comatose, she had never seen so clearly in all of her 96 years.

Her senses were sharpened. Her chest rose shallowly as she inhaled the antiseptic smell of her hospital room. She heard the beep-beeps of her oxygen monitor combined with the bump-bump of the nurse's cart wheeling her way.

Limp, but not alone. Joey, her 70 year-old son gently grasped her right shriveled palm, while Menachem, her 56 year-old, tenderly caressed her left arm. Her boys. Her sweet little boys.

Flashbacks. Joey, all innocence and questioning eyes, was a starving ghetto child. Child's arm outstretched for bread. Her child.  Huddles of terrified adults murmuring in Hungarian in closely knit clusters. The Angel of Death strutted freely here, grinning ridiculously like a Cheshire cat.

She heard snatches of Hungarian again, yet she was in Detroit, Michigan. Of that she was certain.

She had always loved to sing. She had yearned to join the opera as an adolescent, yet her father had expressly forbid it. Eighty years later, she was glad that her father had restrained her teen-aged impulsivity.

Her two boys. Her world. Surely no other mother had boys as wonderful as hers! They harmonized together in that hospital room, love and longing drowning each melodious line. Joey, an active member of his Young Israel shul – Menachem, beloved rabbinic scholar with ten children.

Two brothers. So dissimilar, yet accepting, of each other's differences. Their bonding was the ultimate goodbye gift.

She was soaring. The rhythm of song was gently lifting her higher and higher, on invisible wings.

A third voice interrupted the larger than life serenade unfolding in the geriatric ward of Beaumont Hospital.

I have been a silent witness to the love and care you have been showering upon your mother.

It was Anna McKoy, the nurse who arrived from South Dakota a mere two weeks prior.

Anna's voice stumbled and cracked as she whispered, "Rabbi and Mr. Greenfield, the two of you are the first orthodox Jews I have ever met. I have been a silent witness to the love and care you have been showering upon your mother these last couple of weeks. Observing both of you now, harmonizing together with shared devotion, has deeply inspired me.

If the two of you are examples of what a Jew is, then the Jewish people truly are the chosen people."

The Angel of Death was ready to complete his mission. She winked. She was not scared to go.

She had lived through World Wars I and II. Her parents, most of her siblings, nieces and nephews were brutally murdered on bloody Hungarian soil.

Together with her husband and six year-old son, Joey, she had managed to flee Europe with never a backward glance. To look back was to die emotionally; she passionately wanted to live. She was compelled to live, for herself and for her butchered family members.

Now it was time to join her parents.

With sons like this, her legacy would live on.

Three years later, terminally ill Menachem lay dying on Tzom Gedaliah, 5762. His teary-eyed family surrounded him, cradling him, embracing him.  Although he appeared comatose, he was vividly aware.

His sons and sons-in-law crooned, "Lulei sorathca shashuai az avaditi b'anyi…."  Had Your Torah not been my plaything, then I would have perished in my affliction" (Psalms, 119:92) He gave an inner smile, visible to no one but the ethereal.

With children like this, he was not scared to go.

His song lives on.

Yehudis Green is the founder of Trophy Writers, www.trophywriters.com, a writing service company. As far as Yehudis is concerned, there are no boundaries between work and hobby, as she has been passionate about the written word since grade school! In her spare time, Yehudis enjoys spending time with her husband and children, aged one to eleven years-old.

On the Jewish Road
Should I Break Up, Get Engaged or Keep Dating?
Time Is Your Precious Commodity
A Constant World in Flux
Comments
MOST POPULAR IN Spirituality
Our privacy policy