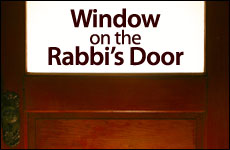 Years ago I was privileged to be part of a building campaign of a very beautiful shul. Shortly after we inaugurated the building, I was giving a tour to a visiting rabbi and expected the usual compliments. Instead, I was startled by his unexpected decorating advice.

"It’s a beautiful shul, rabbi, but it has one ugly feature. There is no window on your door."

”Oh, that’s not needed," I started to explain.

"I’m sure you have women visit your office,” he interrupted. “It’s a beautiful shul, but your door needs a window. ''

We parted a minute later. I was a bit annoyed and insulted by his unsolicited advice. Why would I of all people need a window? I felt he was showing me a lack of respect.

Looking back on the exchange, I realize that I was being smug and self-righteous. In truth, I was insecure about how others might view me if I did have "the window.''

Today my opinion is that a window in a closed rabbinical office should be as standard as a prayer book on the bookshelf.

Rabbis are often counseling people, sharing wisdom, and offering emotional support to people who are going through a rough patch in life. There are obvious parallels to that of a therapist, and by looking at some of the protocols instituted to safeguard clients and therapists, we can get a better sense of how to formulate proper Jewish conduct in our shuls and schools.

Both the American Medical Association and the American Psychological Association (APA) have “ethics policies” that prohibit mental health professionals from having intimate relationships with patients or clients. This behavior is forbidden on a criminal basis in 15 U.S. states, and can lead to revocation of one's professional license in all 50 states.

Additionally, the therapist or doctor is liable for financial claims that can be quite considerable. Even without talking about rape or child molestation, these guidelines are relevant with consenting adults.

How effective are these guidelines in preventing mishaps?

Dr. Kenneth Pope, a former chairman of the APA Ethics Committee, reviewed past surveys of ethics violations among mental health professionals. He estimated that 7% of male therapists had entered into an intimate relationship with a client or patient.*

Compliance rates of 93% might be satisfactory to some, but we want to make an environment in all our schools and institutions that is the best possible. We want to be especially vigilant in protecting children.

Our Sages taught that good people can fall into an illicit sexual relationship when they are in a situation that overwhelms them. Their good judgment is compromised by the desire of a moment… and "things happen."

There is much talk today about powerful men in politics who "threw it all away" because of such mistakes. The Torah tells us that such behavior exists in all societies, including the Jewish people. It’s not just politicians; it’s everyone.

Maimonides, Rabbi Moshe ben Maimon, wrote 900 years ago that seclusion between a man and a woman in a private setting is the greatest cause of mistakes and grief in these matters. Though the laws are fairly complex, the basic idea is that a man and woman should not be secluded unless one of the following conditions is met:

Some may contend that since “the door is not locked,” that does not constitute seclusion. But there is typically so much respect for the rabbi or for the doctor/client relationship that realistically no one will enter the room. With an unlocked door, the letter of the law may be maintained, but I suspect that the spirit of the law is left wanting.

Of course, a man and woman who seek to violate these norms will not be stopped by any such guidelines. But they do help to prevent good people from falling prey to their base desires. Our Sages teach that well-intended people stumble and make mistakes, not because they are bad people, but because they allow themselves to be in a situation where the unexpected occurs. These guidelines help protect them.

The Talmud (Kiddushin 81b) describes how Rabbi Tarfon, a great and holy man, would tell his students to keep an eye on him. He admitted to being tempted by his own daughter-in-law.

Actually, Rabbi Tarfon was over-exaggerating. He wanted his students, the younger rabbis, not to be ashamed of taking on precautions that would prevent them from falling prey to their desires. He reasoned that if he took upon himself extra stringencies, they would not be ashamed to follow suit.

So while these guidelines are grounded in ancient Jewish teachings, they are far from antiquated. They speak to human nature in all generations.

A woman on a business trip would certainly find it odd if a male colleague suggested they meet in his hotel room rather than in a public space. And a married man who answers a phone call from his wife, while a female business associate sits aside him in a hotel room, would quickly learn from his wife that she is concerned not just about "the way it looks." She is concerned about what will actually happen.

A governing board of a school or synagogue should appreciate the financial liability if an employee such as a teacher, rabbi or therapist violates these ethical prohibitions. This applies when the behavior is between adults, but all the more so when children or teenagers are involved.

That visiting rabbi’s decorating advice was spot on – rabbis, teachers, principals and therapists should all have a window on their door. Perhaps the distinguished leaders of our Jewish institutions can make such windows an accepted practice. It would set a valuable standard for us all.

* Source: "Sex Between Therapists and Clients,” by Ken Pope, appeared in Encyclopedia of Women and Gender: Sex Similarities and Differences and the Impact of Society on Gender (Academic Press, 2001).

The Best Revenge: Holocaust Survivor Celebrates Birthday with 400 Descendants
Why Are The Prayers Of Yom Kipur So Repetetive?
Ha'azinu 5783: A Time for Unity!
Twisted Thinking
Comments