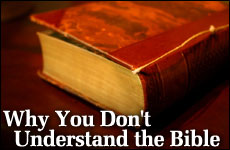 The Jewish sages of antiquity were in the best position to interpret and comprehend the Torah.

Two thousand two hundred years ago, Ptolemy, King of Egypt, forced 70 rabbis (at knife point) to translate the text of the Torah into Greek, creating a document that would come to be known as the Septuagint. This work would eventually comprise the "Old" section of the Bible with which we are all familiar. While he succeeded in the extraction of a highly diluted version of the most sacred text of the Jews, he did not manage to procure the methodology that is required to make any sense of it, thus dooming countless translations and many generations to an inherently erroneous, faulty and dermal level of comprehension.

Karl Heinrich Graf and Julius Wellhausen are the two main architects of Biblical "source" criticism, best known for what would later be termed the Documentary Hypothesis: the idea that the text of the Torah is a redacted patchwork of ancient myths and folklore penned by numerous authors. Peering in from the outside, they crafted the hypothesis on five main pillars, one of which suggested that duplicative and repetitious words and passages were evidence of multiple authorship. This is a reasonable supposition if one is unfamiliar with, or uninterested in, the Torah's rules of exegesis (the collection of critical disciplines used to understand and interpret religious texts).

To the Talmudic scholar, the Torah's repetitions, multiple Divine names, textual divergences and variations of language and style contain a wealth of information.

In fact, later Bible scholars such as Robert Alter and R. N. Whybray held that the text was more a unified whole than not. Alter in particular expressed remorse that these earlier critics did not take the classical Jewish approach more seriously. Why? Because to the Talmudic scholar, the Torah's repetitions, multiple Divine names, textual divergences and variations of language and style contain a wealth of information. To treat them as mere editorial mishaps is nothing less than tragic. It stands to reason that the Jewish sages of antiquity and the subsequent elucidators, with their assumption of Divine authorship (and thus a unified text), deep familiarity with the material and hundreds of years of crowd-sourced scholarship under their belts, were in the best position to interpret and comprehend these documents.

The text of the Torah is coded in multiple ways. Those with a trained eye intuitively sense in these passages an invitation to delve deeper. An extra or missing word or variant spelling, for example, act both as a marker and specialized tool to reveal information. For instance, through their numerical values, a variant spelling for the only round object that is mentioned twice in the Book of Kings is used to derive Pi. There are tens of thousands of these units of information. Each one is sourced in the Five Books of Moses or the later writings and the process of extracting them is known as the Oral Law. There are 13 rules that govern this exegesis and without them (and the classical commentaries) the book is exceedingly opaque.

Additionally, without the oral tradition to explain them, what are we to make of commandments such as "slaughter the animal in the way that I have shown you" with no hint as to how that is to be done? What does it mean to "guard the Sabbath and keep it holy?" There are penalties for not doing it right but no description as to how to do it. How exactly are parents supposed to be "honored," and in a practical sense what constitutes "loving one's fellow as oneself?"

The oral tradition that crystallized into the Talmud, the Midrashim and the Kabbalah is the only tool available to successfully decode the massive amount of legal, ethical and spiritual information that is embedded in the text.

Deciphering these works in English is like doing surgery with mittens.

This is to say nothing of the critical subtleties that are, literally, lost in translation. Deciphering these works in English (which were themselves translated from Latin, which were translated from Greek) is like doing surgery with mittens.

For instance, most people believe that the opening words of the Bible are "In the Beginning." Anyone with basic familiarity with the Hebrew language will instantly recognize that it is not the case. Rather, it reads, "In the beginning of..." and though a noun would be expected, none is given, rendering the actual translation as "In the beginning of He created." Add to this the fact that the fourth and sixth words have no translation and a third person past tense verb modifying a plural noun and we have a grammatical nightmare. Apparently that redactor wasn't skilled enough even to get the first line right and hadn't yet mastered kindergarten Hebrew. Or, just maybe, it is brilliantly structured to teach scores of ideas with a maximum conservation of space. Indeed, three entire volumes of the Zohar are required to fully expound this first word.

Many philosophies and religious systems have built themselves on top of the Torah's foundation. Though we never consented to have our tradition used in these ways, obviously, once Ptolemy posted it "online," there was nothing that could be done and the world was free to manipulate and (mis)interpret the words as they saw fit.

Nonetheless, there is something irksome about being told what your own book means. Wellhausen and friends did not seem to regard our stewardship of and ardent dedication to our own spiritual tradition to be particularly worthy of consideration. Incredibly, the fact that the books of the prophets are written in our language and were in our possession hundreds or thousands of years before others came into contact with them does not give pause to those who claim that they know what the verses mean better than we do.

As a case in point, I often hear about the "vindictive" nature of the "Old" Testament and the (misunderstood) doctrine of an "eye for an eye" is often cited as a classic example. A simple question can be posed to illustrate the fallacy of the notion that the Torah suggests actually putting someone's eye out as a punishment. What would a Jewish court do if an eyeless man ran around poking people's eyes out? Wouldn't his impairment exempt him from retribution? Obviously, this is not (and has never been) what the text wishes to teach us. Rather, it is telling us that the perpetrator deserves to have his eye put out, but he won't. He will make an appropriate monetary payment to the victim.

This is a very broad topic and one that does not condense easily into a web article. Therefore, allow me to close with an invitation: To anyone who is open to re-examining their assumptions and interested in gaining a more solidified understanding of the complexities and beauty involved, please consider reading "The Documentary Hypothesis" by Umberto Cassuto and "The Art of Biblical Narrative" by Robert Alter. For members of the Jewish community who would like to explore these ideas hands-on, I recommend the free phone learning service of Partners in Torah or a visit to your local Aish branch.

Why Celebrate with Bitter Herbs?

World of Love #3 - Uniqueness of Mankind

Why God Matters: What Gives Life Meaning?
Why Are The Prayers Of Yom Kipur So Repetetive?
Ha'azinu 5783: A Time for Unity!
Twisted Thinking
Comments