Why They Lie About the IDF 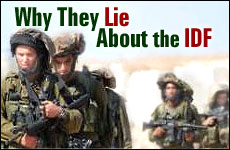 Israel’s superior moral strength is the very target of criticism against it.

Have you ever wondered how the Jews’ enemies get the gall to say such blatant lies?

They claim that the Jews kill Christian children in order to eat their blood in our Passover matzahs.

Aside from the obvious prohibition of murder, Jews of all people don't eat blood! The Torah (Leviticus 7:26) issues a stern warning against consuming blood, and we even check our eggs to make sure they are free of any speck of blood.

Our enemies claimed that we caused the German defeat in WWI and had stabbed Germany in the back.

Yet the Allies in WWI beat the Germans hands down, and Jewish Germans fought for their country at higher rates (and with more medals) than their population warranted.

Our enemies claim that Israeli soldiers murder innocent Palestinians on a regular basis.

In truth, IDF soldiers regularly endanger themselves in order to avoid civilian casualties. If Israel wasn't so concerned about civilian deaths, it could have stopped terror in its tracks long ago – and made Israel much safer for its citizens.

Why do our enemies make such ridiculous claims?

Imagine the biblical scene. The evil Korach leads a rebellion against Moses, and wants to drum up support by criticizing God's chosen leader. Korach's complaint is that Moses is “raising himself over the community of God” (Numbers 16:3) – in other words, being arrogant and power-hungry.

The only problem with this claim is that just a few chapters before, in Numbers 12:3, God Himself had testified that Moshe was the “most humble person” who ever lived. The Jews at the time were certainly aware of this sterling quality.

So why did Korach say something that was so obviously untrue?

The answer is both profound and relevant.

When someone wants to fight you, they will attack your greatest moral strength – and deny it.

If Moses' humility went unchallenged, no one would dare challenge him.

Korach knew that Moshe was exceedingly humble – and that is exactly why he attacked Moses as being arrogant. Why? Because if Moses' humility went unchallenged, no one would ever dare challenge him.

If anti-Semites throughout history would have acknowledged that the Jews are peace-loving, they never could have whipped up the masses to rampage, steal, rape and pillage.

If the Nazis had admitted that their Jewish citizens had contributed magnificently to – and died bravely for – Germany, they never could have successfully cast the Jews as the scapegoat for all of Germany's ills.

The same logic applies to the IDF.

We've seen it time and time again. Arab terrorists regularly attack Jewish civilians. After endless patience, warnings and pressure, in the end the IDF is sent in to stop the attacks. It drops leaflets, phones private houses, and holds its fire as much as possible in order to enable civilians to leave the area or to hunker down and avoid getting hurt.

The Hamas and Hezbollah gangs use civilians as human shields – creating civilian deaths – though only a fraction of what would have occurred anywhere else in the world. And yet the IDF is regularly attacked for being cruel, murderous, and insensitive to the lives of Arabs.

Now we know why they make these ridiculous claims.

Israel's enemies want to destroy her. They cannot admit the truth that the IDF is, by far, the most moral fighting force in the world. If they admitted this – or let this obvious reality go unchallenged – who would believe their other anti-Israel rhetoric?

The Torah commands us: Treat others well, because you suffered abuse under Pharaoh in Egypt. Jews, who have suffered more persecution than any other people in human history, are the most cautious about hurting others.

And that is why our enemies attack this very point. They know that because Jews are so careful, Jews are hyper-sensitive to any criticism on these issues.

It is the height of moral absurdity to use Israel’s moral strength against it. Yet our enemies do so, denying Israel's moral superiority, as a strategy to defeat it.

The Gaza War in 5 Minutes

The Hamas 'Peace' Gambit
The Blue Beyond
Great Place to Live
Is Eating Supposed To Be Spiritual?
Comments
MOST POPULAR IN Israel
Our privacy policy