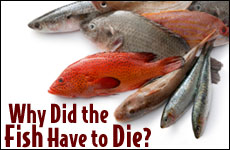 Today, one of the 5-year-olds in my kindergarten class asked me a question for which I didn't have an answer.

I had been teaching the class about the first of the Ten Plagues. As we know, the ancient Egyptians cruelly enslaved the Jews for 210 years, inflicting dreadful torture upon them. God punished the Egyptians with 10 spectacular plagues and then took the Jews out of Egypt with "a strong hand," to quote the Haggadah.

The first of those plagues was the Nile River turning to blood. I told the students the facts.

"But all the fish must have died," Dina said. "Why did the fish have to die?"

At this point, several months into the school year, even these kindergarten kids have a general concept of how God runs the world. They know that, although we can't always understand God's ways, God is good to all. Even fish.

Dina also knows from the story of Noah that the “good” animals were saved from the Flood. They went onto Noah's Ark. It was only the wicked people and those animals that which corrupted their natural ways that drowned. (Rashi to Genesis 6:12)

Since those fish back in Egypt didn't do anything bad to the Jews, Dina reasoned, why did they have to die? To answer her that they were simply collateral damage wouldn't have flown. She knows God is just to all. Even fish.

I went home, did some research. Here are the answers I brought back to the kindergarten class the next day:

(1) We know that there is one God, but the Egyptians didn't know this. They thought there were many different ones, and that each one controlled a different part of the world. If God had made a miracle so that the fish survived in those bloody Nile waters, the Egyptians, no doubt, would have said that Moses' God was certainly strong, but apparently the god of the fish is stronger! Then the whole point of the plagues would have been lost. God made those plagues to teach the world that there's just one God Who runs the show. Period.

(2) A fish – like everything else on earth – has a spiritual life-force which keeps it alive. The “spirit” of any creature wants only one thing – to do God's will. God wanted the plague to be so awful that the Egyptians would start thinking about changing their evil ways. When those fish died in that plague of blood, their dead bodies smelled so bad it was unbearable! By stinking up such a storm, those fish contributed to God’s plan. Indeed, before they were even hatched, they were created for this moment and this job.

In fact, those fish got a reward for giving up their lives. What reward? I'm not God's office manager, so I can't tell you for sure. But I do know that a big part of the reward is simply that they got to be part of God's grand plan. True, it must have been great fun to be fish and swim in such a glorious river as the Nile. But even such a pleasure can't compare to being part of God's Big Picture, part of something larger than your own fishy self.

(3) The last answer I didn’t tell to the kindergarten, because it's a bit of a stretch for even smart 5-year-olds: 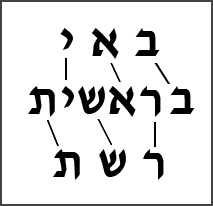 The first word in the Torah is "Breisheet." In Hebrew, it has six letters. Each Hebrew letter has a numerical value. If you add up the values of the first, third and fifth letters (Bet, Aleph and Yud), they add up to 13. This is also the numerical value of the word "Echad," which means "One."

The second, fourth and sixth letters spell the Hebrew word "Reshet," which means a "network." The first word of the Torah hints to a huge secret – that we are all part of One Network, connected by one Grand Plan.

Someday, when we get to see that great plan and are swept away by its amazing beauty, I'll be glad that I got to be a part of it and that I got to deal with thoughtful people like 5-year-old Dina.

With thanks to Mrs. Leah Kohn of the Jewish Renaissance Center

The Seder Plate: Inside Out
Blessing on Chewing Gum
Was Rahab a Prostitute?
Extras In Our Own Epic
Comments
MOST POPULAR IN Passover
Our privacy policy