Why Is This Luxury Resort Different From All Others? 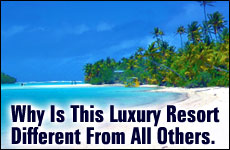 While my body would love to go away for Passover, my soul enjoys making Seders at home.

My friend Rhonda asked me nonchalantly, “Where are you going for Pesach this year?”

Envisioning the whirlwind travels ahead, my head began to spin. “I’ll begin at Target for new shelf paper, sponges, paper goods, cleansers and a new broom. Then I’ll dock briefly at Ralphs for the special deal on shmura matzo and whatever else they’ve got for Pesach that’s on sale. Next I’ll bully my way in to the kosher market for meat, wine, and enough matzo meal to plug up the Hoover Dam. Then I’ll get over to Stan’s Produce for fruits and vegetables. By that time, I’ll have thought of dozens of other things I need, and start the whole thing over again. How about you?”

“We’re going to the Mauna Lani Hotel in Hawaii,” Rhonda said, barely able to look me in the eye.

Faster than you could say “Dayenu!”, my Jewish spiritual training to be happy for my friend battled with a far less noble instinct: insane jealousy. Never having been to one of these glatt kosher shebangs, part of me longs for the unimaginable luxury of an entire Pesach without the endless cleaning or shopping, a week of catered gourmet cuisine, my choice of inspiring shiurim and lectures, and simple relaxation. But with a family of six, the cost of these jaunts sends me reeling. That kind of money pays for one-and-a-half tuitions for a year. It could almost remodel a bathroom. We just don’t have that many shekels lying around.

When I think of the burgeoning business of plush Pesach resorts, all I can say is, we’ve come a long, way, bubeleh. Not for these Jews the toothbrush scrubbing of the glass refrigerator shelves, the scouring of closets in search of a long-lost Milk Dud, or the hefting of briskets large enough to feed every player on the Lakers. No, these Jews can just up and sell the chometzdik house for the week before jetting off to relive the Exodus on a sun-drenched beach. Well, a beach has sand, and Egypt had sand, so maybe there’s the connection.

My good friend Dr. Diane Medved, a clinical psychologist and author, has never made Pesach at home. That’s because she and her husband, nationally syndicated talk show host and author Michael Medved, are sought-after speakers on the Pesach resort circuit. Over the years, they’ve poured their four cups of wine in Coronado, Phoenix, Hawaii, and Diane’s personal favorite, Hot Springs, Virginia. The Medveds have to sing for their suppers, with each of them giving lectures five or six times during the week. Still seems like a great deal to me.

“I know I’m diminishing my reward by not making Pesach at home,” Diane told me, “but I’ve managed to let that pass by. I don’t miss layering aluminum foil all over my kitchen and buying all that matzo. I look forward to it as a vacation.”

Though Diane lectures on relationship and child-rearing issues, her best-attended class is dubbed “Free from the Fat Mentality,” an especially relevant topic given the food, which Diane reports is served in “staggering” proportions.

Diane also enjoys meeting new friends, as well as the choice of participating in communal seders or small family seders, which are both offered.

But other friends who’ve attended resorts have returned convinced that Pesach was meant to be celebrated at home. And despite my slight case of Pesach resort-envy, I also find the hard work of making Pesach liberating in its own way. If I am disciplined, I’ll clean and cook while listening to online Torah classes on the spiritual messages of Pesach. If I am disciplined, I’ll also take time to think, taking a “spiritual inventory” of myself while I clean. That way, both my house and my soul can embrace the holiday on a deeper level.

Also, being so deeply invested in the process of making Pesach makes sitting down to the seder an enormously satisfying feeling. Besides, Moshe didn’t keep barging into Pharoah’s palace demanding, “Let my people go . . . to the Las Vegas Ritz Carlton!” I’m sure it’s possible to have a meaningful Pesach when you are also snorkeling or tossing the dice in a casino in between buffets (is there ever a time when there isn’t a buffet?), but after all these years, finding myself in a resort while celebrating our redemption from slavery would feel like an out of body experience. Or like I won the lottery.

If money were no object, or if I were invited as a guest at a resort in exchange for some speaking gigs along the way, I’d be mighty tempted. (Note to Pesach resort planners: Very few people fall asleep during my humor presentations. And after all that food, they might be falling asleep because they’re full.)

In the meantime, I’m rolling up my sleeves, digging out my Pesach tapes, and starting the Pesach-prep hustle. I’m still not ready or rich enough to conclude my seders saying, “Next year in Palm Beach!”