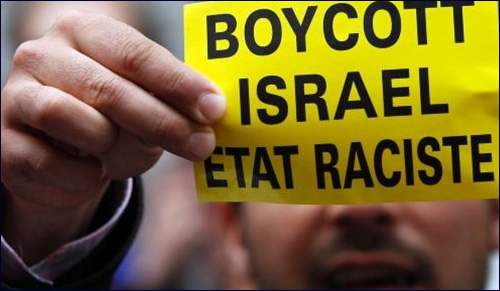 France’s decision to label products from Jewish-owned businesses in the Golan, Judea and Samaria smacks of anti-Semitic bigotry.

Last week, as Palestinian and Arab terrorists were busy setting fires all across Israel, France decided to join the fray by committing an act of diplomatic arson against the Jewish state.

In a move as hateful as it is hypocritical, French President Francois Hollande’s government chose to become the first European Union state to begin to enforce guidelines which single out Jewish-owned businesses in the Golan, Judea and Samaria by requiring that their products bear special labels of origin.

That, of course, is complete hogwash.

To begin with, the requirement applies only to factories owned by Jews, whereas Palestinian Muslim-owned enterprises would not have their merchandise similarly labeled. In other words, at its root, the criteria being applied by France is the religious and ethnic identity of the manufacturer, and these conditions apply only to followers of Moses and not those of Muhammad.

If that’s not racist and discriminatory, what is? Furthermore, as Israel’s Foreign Ministry correctly noted, there are plenty of other “disputed territories” around the world, yet neither France nor the EU are considering applying a similar policy in those cases.

It is Jews, and only Jews, those living in areas such as Judea and Samaria, who will be subjected to “special treatment” by the French.

Hence, there will be no special labels to single out Chinese products made in Tibet, Russian items manufactured in Crimea or Spanish goods from Catalonia. Nor will Turkish products made in occupied Cyprus, Moroccan goods from Western Sahara, or British merchandise from the contested Falkland Islands be affected.

It is Jews, and only Jews, those living in areas such as Judea and Samaria, who will be subjected to “special treatment” by the French.

This is anti-Semitic bigotry, pure and simple.

Adding to the irony is the fact that it was just a year ago, in early November 2015, that Israel joined the rest of the civilized world and stood in solidarity with France, which had just endured a series of coordinated jihadist terrorist attacks in the streets of Paris that left 130 innocent people dead.

Thousands of Israelis gathered for a rally in Tel Aviv to show support for the City of Light, holding aloft signs that read “Tel Aviv stands with Paris” and even singing the national anthem as city hall was bathed in the red, white and blue tricolors of the French flag.

Now, it appears that France has decided to return the favor by showing solidarity with those who seek Israel’s demise.

The French move will add fuel to the fire of the anti-Israel Boycott, Divestment and Sanctions (BDS) movement, as well as create an opening for other EU countries to adopt similar policies.

Similarly, it will encourage the Palestinians to continue in their obstinate refusal to negotiate with Israel.

Of course, all this comes at a time when France and the rest of Europe are witnessing a surge in anti-Semitism. And that is what makes the move so morally repugnant and obscene. After all, have the French forgotten what happened the last time they decided to dish out “special treatment” to the Jews? In case they have, here’s a quick reminder.

In October 1940, the French collaborationist Vichy regime, which was happily allied with Nazi Germany, passed legislation known as the Jewish statute, which not only barred Jews from various professions but also “aryanized” Jewish-owned businesses. The restrictions continued to be tightened, and culminated in one of the darkest moments in French history, when French police began rounding up Jews in July 1942, before handing them over to the Nazis to be shipped off to Auschwitz.

Among those arrested by the Vichy French were Isaac Kottler, my grandmother’s first cousin, and his wife, Anna. A journalist and book lover, Isaac is said to have amassed a large collection of volumes. Though he had been born in St. Petersburg in 1902, he chose to leave behind the chaos of Russia and settled in France.

When my grandmother visited him in Paris before the war, he showed her his most prized possession: a family tree that stretched back to the expulsion of the Jews from Spain in 1492.

It showed that our ancestors had lived in Toledo, and traced the journey of their wanderings across Europe down through the centuries. But that mattered little to the Germans and their French collaborationist allies, who saw the Jews as aliens not worthy of living on European soil.

The lessons of the past should be clear: singling out Jews and labeling them is a recklessly dangerous move, one that can open up a Pandora’s box of hatred and fury.

By adopting such a step, France has not only betrayed Israel, but it has turned its back on the values of “liberté, égalité, fraternité” (“liberty, equality and brotherhood”) which it so loudly claims to uphold.

The French plan to label Israeli products from the Golan, Judea and Samaria cannot be allowed to stand, and we must all raise our voices in protest against this repugnant scheme.

It is time to remind them of a very simple point: seven decades after the Holocaust, France and other European governments have no right to tell Jews where they can or cannot live. Especially in our ancestral homeland.