Why France Refuses to Prosecute an Antisemitic Murderer 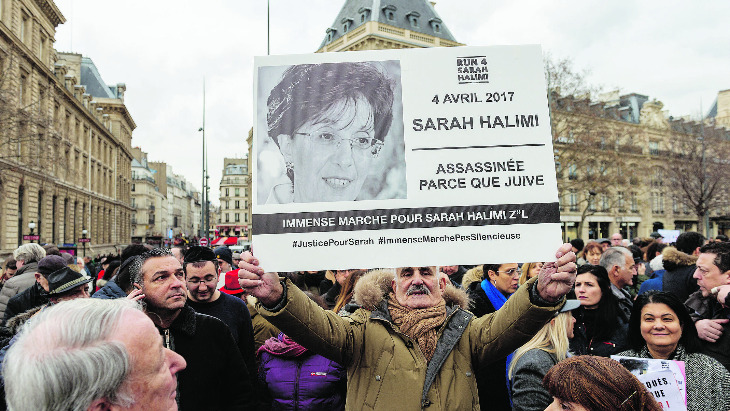 Sarah Halimi was beaten and thrown from her window. Her killer will not be tried because he smoked weed.

In a normal world, everyone would know the name Sarah Halimi.

It’s understandable if you don’t. The press didn’t obsessively cover her murder the way they cover other hate crimes – for reasons I will explain.

Sarah Halimi was a retired French physician and schoolteacher. She was also an Orthodox Jew. On April 4, 2017, Halimi was in her Paris apartment where she lived alone. In the middle of the night, a 27-year-old Muslim man of Malian origin named Kobili Traoré, who lived in the building, broke into her apartment. Traoré tortured Ms. Halimi, who was in her 60s, beating her and kicking her. According to neighbors, who called the police after hearing Halimi’s cries, Traoré called her a “shaitan” (satan) and a dirty Jew. Ultimately, he threw Ms. Halimi’s battered body out of her third-story apartment window shouting “Allahu akbar.”

There are other gruesome details, but that is the basic story. It’s hard to imagine a set of facts more damning and more clear.

So in December 2019, when I read that French prosecutors had decided to drop murder charges against Traoré, a man with nearly two dozen prior convictions, on the grounds that he had smoked pot, I felt sick.

It spurred me to write a column called “Inconvenient Murders” about the case – and about the moral calamity sweeping the West of which this was only the clearest (and at the time most recent) example.

We are suffering from a widespread social health epidemic and it is rooted in the cheapening of Jewish blood. If hatred of Jews can be justified as a misunderstanding or ignored as a mistake or played down as a slip of the tongue or waved away as “just anti-Zionism,” you can all but guarantee it will be.

The column offered a round-up of various attacks against Jews in the great cities of Europe and North America – places like London, Brooklyn, Montreal and Washington, D.C. – and noted the strange silence on the part of those who claim to care deeply about justice, silence from those who can detect the most subtle microaggression.

It is hard to read that list now, knowing how many tragic stories, how many names, have been added in the years since the column was published. In the past few years, it feels like we have gone from antisemitism of horse-and-buggy velocity to something more like a bullet train.

The speed has changed. But the pattern remains exactly the same. As I wrote then:

There is a theme here. The theme is that Jew-hatred is surging and yet Jewish victimhood does not command attention or inspire popular outrage. That unless Jews are murdered by neo-Nazis, the one group everyone of conscience recognizes as evil, Jews’ inconvenient murders, their beatings, their discrimination, the singling out of their state for demonization will be explained away.

The rule of thumb, as the British writer and comedian David Baddiel has noted in his new book, is that Jews Don’t Count. But there is a more sophisticated version of this bloody arithmetic.

Here’s a strange example of this from my own life:

I remember very clearly in June 2020 The New York Times ran a profile of the new Iraqi prime minister. The Baghdad bureau chief wrote the piece and, unwittingly, did a bad thing. That bad thing? She described Mustafa al-Kadhimi as a “Western-style” leader.

Some other Times employees were offended. Our corporate Slack lit up. Apparently this was a terrible adjective. It was Orientalist, colleagues claimed.

If you look at the piece online you’ll notice it was updated after a day of being published. Western-style was stealthily deleted and replaced with the word “smooth.” This came after various mea culpas from very busy people in that Slack channel.

Now consider that in December 2018 the New York Times book section ran this puff piece about Alice Walker. Then in May 2020, the month before the Iraqi prime minister snafu, the paper hosted Walker on this adoring podcast with Cheryl Strayed. Alice Walker is an anti-Semite. She is a superfan of David Icke, a conspiracy theorist who believes in the lizard Illuminati, and that Jews both bankrolled Hitler and control the KKK. (For people who don’t follow news about the Jews, all of this might still come as a surprise.)

In addition to “The Color Purple,” Alice Walker writes profoundly antisemitic poems (and I encourage you to read the whole thing) with lines like:

Are Goyim (us) meant to be slaves of Jews, and not only

That, but to enjoy it?

Must even the best of the Goyim (us, again) be killed?

But when I and others pointed out as much to powerful people inside the paper, guess what happened? Nothing. No Slack apologies, no editor’s notes, no brouhaha. Just silence.

And so it is the case with the four-year saga of Sarah Halimi. The final injustice came last week, when the country’s top appeals court upheld the earlier, lower court decision that Traoré could not be held criminally responsible because he was high. Apparently smoking a joint had compromised his “discernment” and he attacked and killed Halimi not because he hated Jews, but because he was in a “delirious fit.”

As Francis Szpiner, one of the Halimi family’s lawyers, asked of the court’s strange logic: “Will this also apply to drunk drivers who kill children on the road?” The question answers itself.

The madness here does not belong to Traoré. It belongs to France.

If you are new to the subject of French anti-Semitism – a survey put by the AJC last year found that 70 percent of French Jews say they have been victims of at least one antisemitic incident in their lifetime – this piece is a good primer.

The French Jewish community, which is the largest Jewish community in all of Europe, has seen which way the wind is blowing for awhile now. French Jews are heading for the exits, mostly to Israel, and this National Geographic essay powerfully captures the phenomenon.

If you are looking to go deeper into this topic, I highly recommend the work of the French writer Marc Weitzmann, who has been chronicling his country’s anti-Jewish violence and its paralysis in the face of it. His 2019 book is called “Hate: The Rising Tide of Anti-Semitism in France (and What It Means for Us).”

Kristallnacht: Murder by Euphemism
Why Are The Prayers Of Yom Kipur So Repetetive?
Ha'azinu 5783: A Time for Unity!
Twisted Thinking
Comments