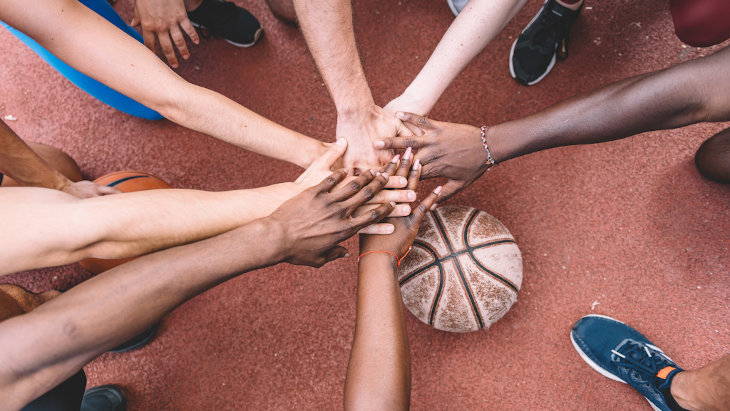 One answer lies in the three key moments that can help make or break a basketball player’s spirit.

When I was a high school student, I volunteered for a Jewish after-school program thinking it was some sort of big brother program. I thought we’d play some basketball, have some pizza, make some jokes, and hopefully I could be a good influence in the life of someone younger than me.

I was taken aback when after some introductions I was asked by eight-year-old Daniel, “Why do Jews pray?”

I wasn't ready for this. I had not spent time preparing for questions and discussions. I came to chill.

Stunned by the question, I still wanted to be a positive influence. Growing up in a religious home and going to a religious school, I figured I must have the answer for him. But I had no clue. I had never bothered to pay attention or to ask this question myself.

I should have wisely answered, “Great question, Daniel. I never really thought about it. I'll spend the week doing some research and when we meet again I'll fill you in on what I've learned.” Instead, I blurted out in an inexperienced moment of panic, “It's just another thing that Jews do.” I felt awful...

Filled with regret, I called up Daniel's house later that evening to apologize for having made something up and promised him to get back to him with some real knowledge.

That moment played a tremendous role in my life. Suddenly I had stacks of books sitting next to my bed and began to plow through. Daniel’s question woke me up to wanting to know more about what I was doing as a practicing Jew, a quest that continues many years later.

I want to share one idea in regards to Jewish prayer that I learned from that exchange. Among a number of the ideas Daniel and I discussed, I came up with an explanation as to why Jews pray three times a day, morning, afternoon, and night, using basketball as our guide.

After playing for some teams and coaching a bit myself, I came to realize that there were important events “behind the scenes” that made all the difference when it came to game time. Aside from the physical, mental and emotional training that goes into a players’ game, there are three key moments that can help make or break a player’s spirit. These moments can be used build the right motivation and focus, and make all the difference in the outcome.

The first one is right before the game, when the players sit with their coach. By going over their game-plan to focus on their strengths, face the challenges and achieve victory, each player has a goal in mind along with the motivation to accomplish it. The extra hype of “We can do this!” gets the game started strong and sets the tone.

The second moment comes at halftime. With their coach, the players examine how they’ve been doing, and by reflecting on their areas of success they build the next burst of motivation to keep going. If they’re struggling, they analyze what obstacles they face. By examining what’s been working and what needs a different approach, they’ll be prepared to face the rest of the game with maximum effort and confidence.

The third moment is at the end of the game when the team regroups with the coach. How did we do today? Where did we succeed? Where do we need more work? With a pat on the back for the efforts put in, the team can leave with their heads held high, looking forward to moving up the brackets towards achieving their greater goal as well.

Similarly, the three times of prayer provide the perfect formula for success in life.

Moment 1: Every morning you have your first crucial moment preparing for “game day.” By beginning with a focus on what your goal is, how you plan to go about accomplishing it, and the self-reassuring “hype” that you can succeed, you’ll be prepared and motivated to accomplish and live your day to the fullest.

Moment 2: As the day goes on, there will be obstacles and challenges that may tire you out or lead to losing focus on your goals and game-plan. So at halftime, the afternoon prayer in the middle of the day, you have the opportunity to stop and take a moment to reflect. Are you accomplishing what you set out to? Are you struggling in certain areas? Refocus, gain clarity towards what's working and what needs a different approach, and with that second boost, go back and seize the day!

Moment 3: Then comes the concluding evening prayer when the “game” comes to an end. Now is the time to check in on yourself. Did you reach your goals? If so, give yourself a pat on the back! Take pleasure. If you still have more work to put in – make a note, and give yourself the positive encouragement to do better tomorrow while keeping your head held high.

These three moments are also opportune times to refocus on the things that really matter to you. Call your spouse, check in on your kid, connect with a close friend, reach out to a mentor, truly speak with the Almighty, etc... These can all be 'coaches' in life while at the same time being part of your relationship goals throughout the day.

The “Pre-Game, Halftime, Post-Game Prayer Program,” set up by experts on living life to the fullest, is the greatest way to stay focused on your goals and live your greatest life.

Akiva “Hai” Taubenblat is a singer-songwriter musician currently teaching in our academic leadership programs. Originally from Brooklyn, NY, Akiva has traveled far and wide sharing his many talents and devoting time to being a leader for Jewish Youth. After spending three years in yeshiva in Israel, he moved to Las Vegas to work for NCSY/JSU and teach in the local Jewish day school. Akiva returned to Jerusalem to further his own growth, and is now teaching, as well as mentoring students at Aish HaTorah. He also runs a Jewish Q's and A's forum for thousands of people around the world, and is the co-founder of the Aish Yeshiva Band. Akiva can be found performing live on an almost weekly basis within the walls of Aish Jerusalem, attracting hundreds of people from various backgrounds, inspiring passion and building connections through music.

An Open Letter from God during Coronavirus

Understanding Prayer: 10 Short Videos on How Prayer Can Change Your Life

A Relationship with God
Near Death Experience Panel
The Western Wall: The Heart of the World
Ask the Right Question: Tisha B’Av
Comments
MOST POPULAR IN Spirituality
Our privacy policy
Aish.com Is Looking for Great Writers