Who’s Responsible for the Mess in Gaza? 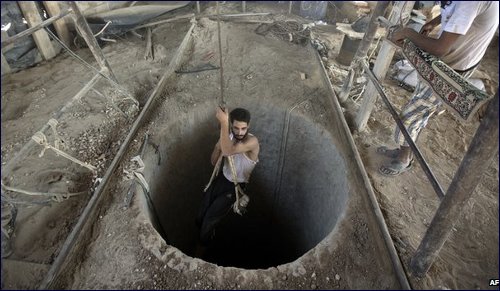 Experts see no way to alleviate the economic crisis. Except, you know, not spending billions of dollars on trying to murder Jews.

Last Sunday, The New York Times treated its readers to another sad story straight out of Gaza. Here’s a representative sample: “’We are dead, but we have breath,’ said Zakia Abu Ajwa, 57, who now cooks greens normally fed to donkeys for her three small grandchildren.”

How to account for such misery? The Paper of Record is on it: Citing Nathan Thrall of the International Crisis Group and other “Gaza experts,” the Times grimly found that “Hamas itself has few ways to alleviate the crisis.”

Now, I’m no Gaza expert myself, but sad stories of starved children break my heart, so I grabbed the nearest napkin and did some math. Which, mind you, is not easy, because Hamas, like every self-respecting terrorist organization, takes care to hide its assets well. But we know from both Israeli and Palestinian estimates that Hamas spends approximately $100 million a year – or about 20 percent of the overall budget of the government in Gaza – on preparing for and executing attacks against Israel. We also know, because the Times piece tells us, that one economic sector in Gaza is booming: “Five concrete plants have been set up,” the piece reports matter-of-factly, “supplying 20 digging sites, at a cost of nearly $1 billion,” all for the exclusive purpose of digging tunnels designed to facilitate the kidnapping and murdering of Jews.

And then, of course, there’s good, old-fashioned charity, the sort that devout people ought to practice gladly. “For the moment,” the Times reports, those with money in Gaza are trying to help those without. Not mentioned in the report are the square footage of Hamas chief’s Ismail Haniyeh’s beachside home – that would be 27,000 – or its cost, a cool $4 million, or the fact that hundreds of the terror group’s bosses have become millionaires by commanding a shadowy smuggling industry and depriving their own people of the chance to prosper.

How to read all these numbers? You could nod understandably, as the Times had, and argue that given Hamas’s steadfast commitment to destroy Israel at all cost, and given their dedication to spend every last shekel on tunnels, Qassam missiles, drones, and other weapons, it indeed has “few ways to alleviate the crisis,” which means that if Israel isn’t going to provide free electricity, sewage treatment, and hospital care to the terror group busy trying to kill it, we’re looking at a deep humanitarian crisis.

Or you could have some compassion for the actual Palestinians living under this evil regime and state the actual cause of their misery.

Abusing the Holocaust
Were Adam and Eve Jewish?
How I Learned to Love the Multiverse
10 Big Jewish Inventions
Comments