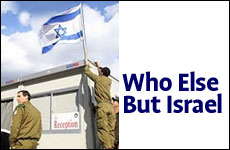 Three days after the earthquake leveled Port-au-Prince last year, a foreign medical team set up a hospital in a soccer field with equipment and supplies unheard of in the rest of the broken city — an X-ray machine, a blood lab, an ultrasound and two incubators for babies who were born prematurely to traumatized mothers.

Now, at the cusp of Japan’s ground zero, where a whole village was dragged out to sea, the same foreign team has erected seven medical buildings. Equipped with many of the same supplies used by the team in Haiti, they are helping hundreds of survivors.

Your guess: the medical team comes from the United States? France? Canada?

“Forty countries around the world approached Japan and offered their (medical) assistance. We were the only ones to come,” Dr. Ofer Merin told me by phone from the remains of Minami-Sanriku, seven hours north of Tokyo. “It’s a real privilege.”

Merin is a cardiac surgeon at Jerusalem’s Shaare Zadek hospital. He is also the chief of the field hospital for the Israeli Defense Force’s reserve unit. The field hospital, he told me, is on call for national emergencies and since 1979, has traveled internationally on emergency humanitarian missions.

Japan is their 12th mission.

“If you drop our group in the middle of a desert we can work,” says Merin, who spent two years in Toronto a decade ago, working at Sunnybrook hospital.

I heard about the Israeli hospital in Port-au-Prince, but never saw it. It was mythical — while around most of the city, local and foreign doctors were reduced to civil war-era surgeries, cutting off infected legs with razor blades and no anesthetic, the Israelis offered their patents respirators and blood transfusions in specialized tent wards. A CBS reporter called it “the Rolls-Royce of emergency medical care.”

It was the first foreign field hospital on the ground — landing in the middle of the night three days after the Jan. 12 quake, and operating six hours later. Over the next 10 days, the medical team treated 1,100 patients and conducted 242 surgeries.

The situation is very different in Japan, Merin said. Arriving a couple weeks after a four-storey wall of water swept away more than half of Minami-Sanriku’s 16,000 people, the 50-member medical team isn’t dealing with emergencies.

Instead they’ve set up a clinic with expertise not easily found in rural Japan — gynecology, urology, pediatrics, ophthalmology. Given the gasoline shortage, an obstetrical team has been visiting pregnant women in the scattered emergency shelters, ultrasound in hand.

One of Merin’s colleagues, Dr. David Raveh, writes movingly in his blog about the director of the town’s old-age home who appeared at the clinic with her Japanese doctor, two weeks after the receding wave sucked at her legs.

“What strength she had, to overcome the wild shearing force of waves, holding onto a pole,” he writes.

She thought nothing of the cuts on her legs, tending instead to the elderly residents. Now her jaw and neck were tense, her doctor told him.

“I cut him short after his second sentence, my eyes widening. Tetanus, I said decisively to her doctor.”

To each of these patients, the Israelis’ presence must offer some solace. But the greater work being done is diplomatic, Merin says.

“There was a law in Japan that stated non-Japanese people were not allowed to treat the Japanese on their ground,” Merin says. “Hopefully, this will open their minds, that countries should assist one another.”

The Israeli mission follows the Jewish concept of tikkun olam — to repair the world. But Merin has his own personal reasons for helping. In 1942, the Nazis entered a Polish village and loaded the Jews onto boxcars bound for the gas chambers at Auschwitz.

Sensing their impending doom, one couple slipped their 8-year-old son off the train. A Catholic woman living in one village over hid him in her cupboard for 18 months.

“Once the war ended, he got out and eventually went to Israel. He got married and had three sons. I’m the second,” said Merin, 50, who has four children of his own now.

“In the Talmud it says, if you save one life, it’s like saving the entire world.”

This article originally appeared in The Toronto Star.