Where Have All the Volunteers Gone? 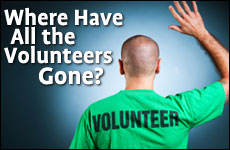 Many young Jews are volunteering. The bad news is that very few of them want anything to do with Judaism.

In the 1990's, the Harvard social scientist Robert D. Putnam triggered national hand-wringing over his book Bowling Alone, which showed plummeting rates of voluntary and charitable activities among Americans, a people known since de Tocqueville's day as the world's most public-minded citizenry. Though some of Putnam's findings and conclusions were challenged, he brought to consciousness the degree to which the venerable American readiness to assume personal responsibility for community problems could not be simply taken for granted. That young people registered as much less likely to be "joiners" than their elders only underscored the point.

Many Jewish leaders shared these concerns. For them, the issue crystallized in the waning support for Jewish communal organizations like synagogues, schools, hospitals, and social-service agencies. Their worries sparked a vigorous campaign to stir the allegiances of young Jews and led to a proliferation of service groups with names like Avodah, Panim el Panim, and JCorps. One such organization, Repair the World (after the Hebrew phrase "tikkun olam"), has now produced the first national study of the results of this campaign, based on a poll of young Jewish adults aged eighteen to thirty-five.

The good news is that large numbers are indeed volunteering. The bad news is that very few of them want anything to do with Judaism.

The survey, conducted by Brandeis University's Cohen Center for Modern Jewish Studies and the Washington polling company Gerstein/Agne, focused chiefly on former participants in Taglit-Birthright Israel, the American Jewish community's flagship investment in building Jewish identity among young people. Of those polled, a whopping 80 percent reported having volunteered during the previous twelve months. This puts Jewish youth far ahead of the general American population, among whom, in the past year, even the most educated showed only a 42-percent rate of volunteerism.

78 percent report indifference to the distinction between Jewish and non-Jewish venues, with 18 percent of these actually expressing a preference for the latter.

But in one critical area, Jews are not only failing to hold their own but are markedly underperforming. When it comes to volunteering for religious groups, a venue that commands the primary attention of about one-third of Americans in general, the comparable figure for young Jews is only 22 percent. The remaining 78 percent report indifference to the distinction between Jewish and non-Jewish venues, with 18 percent of these actually expressing a preference for the latter.

The charitable impulses of Jewish young people, the study finds, are more likely to be motivated by values like making "a difference in people's lives" or doing "something meaningful with friends or family" than by appeals to specifically Jewish purposes. Even invoking the supposedly all-encompassing Jewish obligation of tikkun olam is apt to carry less weight with them than an English-language, secularly-worded injunction, incumbent on all people, to help the needy.

What has gone wrong? Some of the responsibility may rest with the organizations themselves, which are mainly intent on increasing social activism tout court. To this end, they are focusing chiefly on educating their participants about hunger, homelessness, and other social problems, or on encouraging them to campaign for more generous public policies. (The website of one such group, Mazon, currently features a critique of proposals to reduce the federal budget for food stamps.) How Jewish ideas or beliefs might inform one's response to these issues typically receives little attention.

In addition, tikkun olam as a Jewish value has clearly lost whatever power it once had to motivate, let alone inspire. In its modern, secular incarnation, the term was already divorced from its original, specifically religious meanings; according to one of these, Jews are commanded to help create a world in which people will live according to God's laws. Instead, tikkun olam was reinterpreted as the impulse to act benevolently in the public sphere, and descended from there into a hackneyed cliché for supporting liberal or "progressive" social programs. Little wonder that, indistinguishable from other religious or secular rationales for charitable behavior, the phrase seems to have lost any specifically Jewish resonance.

Or, strangely enough, is the problem that it has too much Jewish resonance? So it would seem from the Repair the World study, which reports that, as a message, tikkun olam has become too particularistic for the majority of Jewish young adults, and that "it lacks the strength of a more universal message of helping individuals in need." Ironically, the study concludes that if the goal is to increase Jewish social activism, the organized community would do well to drop any conspicuously Jewish slogan or message. Whether doing so would increase participation in Jewish life itself, however, seems unlikely in the extreme.

This article was first published by Jewish Ideas Daily and is reprinted with permission.

Leslie Lenkowsky is professor of philanthropic studies and public affairs at Indiana University. He served as CEO of the Corporation for National and Community Service from 2001 to 2003.

The Shabbos Goy
It Takes A Lot Of Faith To Be An Atheist
How Instagram Brought Back This Nostalgic Soup
What Makes Eli Run?
Comments
MOST POPULAR IN Israel
Our privacy policy