When My World Imploded: Facing Ghosts in Bavaria 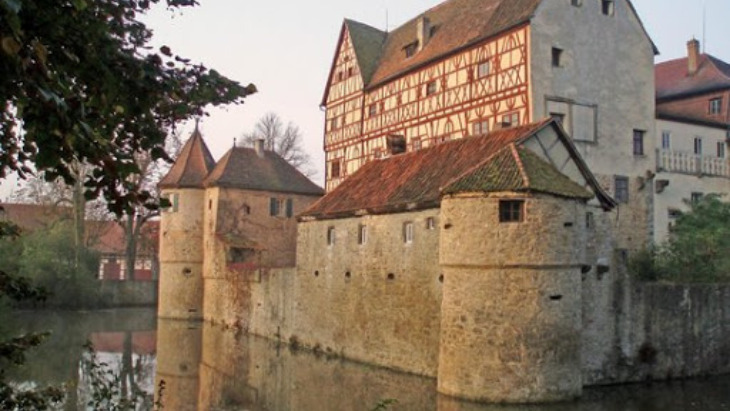 Trudy Naumann Dreyer was 7 when she and her family fled Germany in 1939. A German baron protected their property.

The art deco armoire in Gary Dreyer’s home in Knoxville, Tennessee, whispers secrets from an earlier time and place. The heavy burl wood piece traveled from Germany to the United States after World War II. It survived the Holocaust intact and unscarred – unlike its owners.

Gary’s mother, Trudy Naumann Dreyer, grew up in Unsleben, a small town in Northern Bavaria. Her father and uncles owned a grain and feed business, supplying the farmers of the area with feed for their livestock. An only child, Trudy finished first grade before her world imploded. 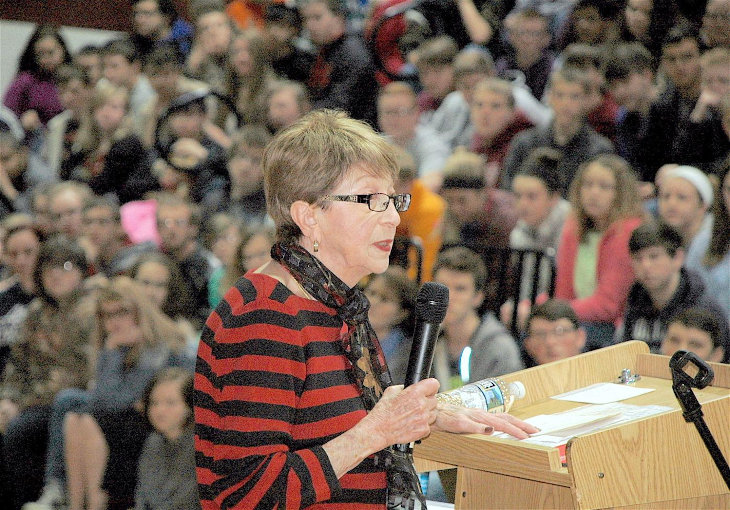 Antisemitism had come out of hiding. “We got along with our neighbors pretty well, but then things began to change,” recalls Trudy, an 89-year-old retired schoolteacher. “I had a new scooter and suddenly it was gone. Somebody stole it. The Nazis came through and ravaged the synagogue. They took out all the prayer books and Torah and had a big bonfire in town in 1938.

We got along with our neighbors pretty well, but then things began to change.

“They rounded up all the Jewish men and took them to jail. We didn’t know what was going on, what was going to happen. My father was dragged out of the house and badly beaten. He had scars on his back for the rest of his life. The women weren’t bothered. One distant uncle went into a barn and hanged himself.”

The Nazis took her father by force to Dachau, a Bavarian concentration camp near Unsleben. The family feared they might never see him again.

Trudy shared a bedroom with her grandmother. One night, rocks flew through the bedroom window and the falling glass cut her grandmother’s legs. This became known as Kristallnacht, the Night of Broken Glass, when Nazis vandalized Jewish homes, schools and businesses and torched synagogues across Germany on Nov. 9-10, 1938.

Trudy’s parents, Nathan and Thekla Naumann, had applied for a visa and made arrangements to leave the country for America. Their visa came through while Nathan was in Dachau, and he was released in 1939. 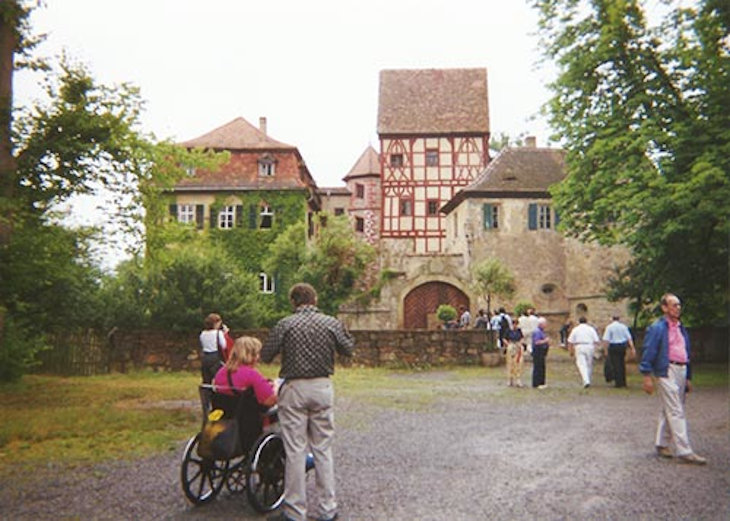 The Baron's castle in Unsleben, Bavaria

“We were very fortunate to get out. If we hadn’t had our visa already to leave, we wouldn’t have gotten out,” marvels Trudy.

She was 7 when the family left Germany and sailed for a month on the Orinoco to Cuba, where they spent a year in a poor Havana ghetto until there were allowed into the United States. Other relatives had scattered to Brazil and South Africa, and all were safe.

When the Naumanns' quota number finally came up, they took a ship from Havana to Miami and then a bus to New York. An uncle already lived there and housed Trudy and her parents to help them get on their feet.

“My father’s first job was as a dishwasher at the 1939 World’s Fair in Queens,” she recalls. “We didn’t speak much English at the time. When the World’s Fair ended, he became a tool and dye maker. My mother cleaned houses for many years. We got an apartment in a Catholic neighborhood.”

The Return of the Armoire

Meanwhile, the Naumanns were reunited with some of their prized possessions, like the art deco armoire. A German baron from Bavaria had protected their property – and that of some other Jews – and returned it after the war. "In these feudal areas," notes Gary Dreyer, "they weren’t necessarily Nazi sympathizers.” 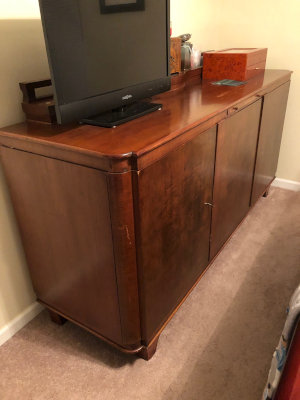 The armoire returned from Germany

In her new life as an American, Trudy met a fellow New Yorker who would become her husband. Peter Dreyer’s career managing radio stations took them all over the United States, eventually settling the family in Knoxville. Widowed in 1998, Trudy has two sons and five grandchildren, several of whom accompanied her and 36 other relatives to Unsleben when she returned for her first visit since fleeing Europe in World War II.

Her first cousin Fred Naumann’s genealogy research had sparked contacts with several residents of Unsleben. Soon the mayor invited Fred and his extended family back to Germany. Some of the townspeople balked at the invitation, but the mayor and his supporters prevailed and arranged ceremonies to honor the Naumanns.

“The fact that I was with all my relatives made me feel comfortable," Trudy says. "I don’t think I would have gone alone. My going back was about curiosity – people who were living in our house, what Unsleben was like now.”

“It was a traumatic past,” she acknowledges. “But the older generation of Germans didn’t come out. I felt safe. My family from across the U.S., France, Israel and Belgium surrounded me, and many years had passed.”

Her son Gary agreed that the older Germans seemed to want to forget the war and the Holocaust. The younger Germans wanted to atone for it. He hadn’t wanted to go to a place his mother and grandparents never talked about. But once there, he found a sense of purpose.

For instance, he met many members of his mother’s tribe for the first time. He also enjoyed witnessing her and her cousins’ reactions as events unfolded on the trip. They met the hospitable couple who now live in Trudy and her parents’ house, where vague memories included big cherry and apple trees in the yard. They went to the school, where students were learning about the Holocaust. 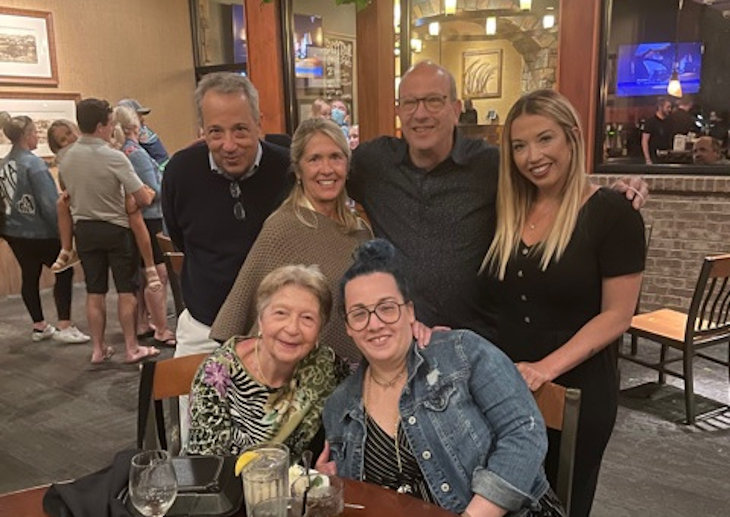 Trudy with her two sons, daughter-in-law and two of her grandchildren.

Says Trudy: “I felt it was something the generations needed to know, that it happened. When you read in a textbook, it’s ancient history. I was part of it. I think it’s important for people to know genocide happened. It was against the Jews. A lot of Jews died, and not only Jews. There were a lot of others killed. This is part of their history. It could happen again.”

Searching for Jews Saved by the Angel of Budapest
It Takes A Lot Of Faith To Be An Atheist
How Instagram Brought Back This Nostalgic Soup
What Makes Eli Run?
Comments
MOST POPULAR IN Israel
Our privacy policy