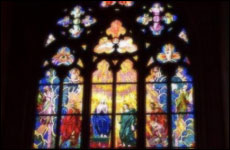 The underground bomb shelter in the hotel at Kibbutz Ramat Rachel hardly seems like a place where history might be made.

Located on the second floor beneath street level, it is a large rectangular room in which the air conditioning does not work and the interior design appears to have been copied from the Soviet Union’s pre-Brezhnev era: drab, dull and dreary. Appearances aside, though, the confined space served as the improbable venue recently for a remarkable scene, as dozens of Christian leaders from 40 countries on five continents gathered together to discuss... Jews.

The occasion was the fourth bi-annual leadership forum of Christians for Israel, a non-denominational Christian organization that was established in Holland in the 1970s by Karl van Oordt and which has grown to boast hundreds of thousands of members around the world.

The group lobbies European parliamentarians in Brussels on Israel’s behalf, supports soup kitchens in places such as Beit Shemesh, assists Diaspora Jews to make aliya and even partnered with the Jerusalem Foundation to restore the Montefiore Windmill in Jerusalem’s Mishkenot Sha’ananim neighborhood.

Their goals are sincere and unequivocal: “Christians should repent of the treatment of the Jewish people by the Church over the centuries, fight anti- Semitism in all its forms and guises, pray for the peace of Jerusalem, and comfort the Jewish people.”

No missionizing, no proselytizing, no hidden agendas.

It says a lot about the way in which relations between Christians and Jews have evolved in recent years that we have come to take such things almost for granted.

But let’s put things in perspective. Several centuries ago, a similar gathering of worldwide Christian leaders would surely have devoted its energies to finding new ways to harm the people of Israel.

Nowadays, they come together to help.

But what really set this event apart, and underlined the sea-change taking place, was the keynote speaker for the evening: the Ashkenazi Chief Rabbi of the State of Israel, Rabbi Yona Metzger.

In a rousing and emotional address, Rabbi Metzger surveyed relations between the two faiths, neither shying away from the darkness of the past nor ignoring the challenges we collectively face. He described how Adolf Hitler and the Nazis had not invented the idea of a Jewish ghetto, but rather had adopted the practice from the medieval model created by Christians.

At one point, as he related a story about Holocaust survivors, the rabbi choked up, prompting many in the audience to shed tears of their own.

Rabbi Metzger added, “If you know of someone who wants to come here to try and convert Jews, tell them not to do it.”

Rabbi Metzger also vigorously defended Israel and condemned the culture of hate of our foes, messages which resonated with the audience and met with their accord.

“I want to give you our thanks for your support and to say that you are truly the sons of Abraham and our brothers,” he told them. Before concluding, the rabbi added an important final point, telling the audience: “If you know of someone who wants to come here to try and convert Jews, tell them not to do it,” pointing out that such proselytization efforts damage relations between Jews and Christians.

As I watched the chief rabbi address the Christian leaders, I could not help but think how extraordinary this scene was. Just 20 or 30 years ago it would have been unthinkable for such a thing to occur.

Moreover, the rabbi’s remarks were like those between friends, without a hint of antagonism or enmity.

Afterwards, Andrew Tucker, the Christian group’s executive director, presented Rabbi Metzger with framed copies of a document in English and Hebrew entitled, “A Call to Repentance, A Word of Hope.” As Tucker began to read the text aloud, he too grew emotional and had to pause to compose himself before continuing.

“We acknowledge with deep shame,” he said, “that the Church for centuries has rejected, persecuted and murdered the Jewish people in the name of Christ. We repent of the supersessionist theologies of the Church which have claimed all of God’s blessings for themselves, and have denied any continuing place for the nation of Israel in God’s plan of redemption for the world. We cut the root and stole the fruit.”

We can neither forgive nor forget what was done to our people over the past 2,000 years in the name of Christianity.

Tucker, along with the group’s international chairman, Harald Eckert, and its president, Rev. Willem Glashouwer, all reaffirmed their commitment to remorse for the past and resolve for the future.

Now I know that there are many Jews who are still skeptical about Christians and their intentions. And we certainly must be vigilant against those who seek to convert Jews, an act which cannot and must not be tolerated. But we must also learn to differentiate between them and those who truly wish to forge bonds of amity and goodwill. Not all Christians are out to get us, and to suggest otherwise is simply fatuous and misleading.

To be sure, we can neither forgive nor forget what was done to our people over the past 2,000 years in the name of Christianity, the persecution, pogroms, massacres and forced conversions, expulsions and blood libels. But when Christians nowadays take responsibility for the actions of their forefathers, seek atonement and extend a hand of friendship, it behooves us to respond in kind.

The Jews of Syria: A Lost Civilization

Save the Yale Anti-Semitism Institute