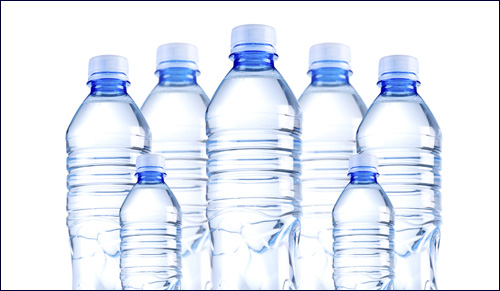 Bottled water companies are waging a war on tap water.

Yankel went with a tour group to Israel. Unfortunately, he got separated and the bus left. After shlepping a mile in the boiling heat he started murmuring, “Vater ... Vater ... .” The sun baked his skin; he started to stumble. Just as he was sure he was a goner, a small house appeared on the horizon. Yankel crawled and scratched at the door. A women opened it, and Yankel, on his knees, whispered, “...vater ... vater!"

"Of course!" said the woman, who ran, returning with a glass. “Here!”

Brightening, Yankel stared, “Did you let it run a little?"

Tap water costs less than 1 cent per gallon; bottled water $8 per gallon. A Yiddishe kop pays for this?!

I started noticing it about 15 years ago. Young people like my son were buying massive cases of water in huge plastic containers. At first I thought it was because we lived near Area 51 and should there be an alien escape at least we’ll be clean for the welcoming. It could also be that it’s summer, and at 118 degrees, we’re not only thoisty … but without H2O, we’ll shrivel like a raisin.

But, like bed bugs, the bottle trend spread to a $14.4 billion market. For you Greenies, I’m not talking 3rd world countries where clean water is a critical problem. But in Flushing, New York? Des Moines, Iowa? Sioux Falls, South Dakota.? Miami, Florida?

Suddenly, humans in developed countries were convinced by ad agencies that if God forbid, tap water touched their lips, they’d glow orange and need to be de-toxed in a government clean room.

Yesterday, my personal water meter hit boil! First, I got a gorgeous discount offer from a bottled water company. For only 344 dollars a month I could buy enough cases of some magic elixir to fill up the Grand Canyon. Thinking that was the government’s job, I “deleted.” Then I saw an ad for Kona Nigari Water, from which I can sip, lose weight, reduce stress, and become gorgeous – all this from an ocean in Hawaii. The cost? $402 per 750 ml. I figure it’s cheaper to make the trip, bring a thermos, and pretend to drown.

This beats turning on a tap? I checked my supermarket and there were dozens of brands of water. Half had names like “Mystery Springs” and “One Hundred Percent Pure” but neglected to say “pure what, from where, from when.” I could be drinking old stuff from some 20-year-old entrepreneur’s shark tank that outsources from Nigeria being pushed by Mad Men.

I was particularly interested as We Jews have always had a special relationship to water. Noah and Moses alone had a hugely intimate relationship with God and water, and our customs involve both cleanliness and water rituals. We Jews also see ourselves as God’s stewards, whose job it is to work and guard the Earth.

So, is bottling water doing the job? For you my beloved readers, I researched.

*Tappy Happy: Is the bottled stuff safer than tapping away your thirst? The bottles? Stunning. Facts about the stuff inside might stun you. Celia Kuperszmid-Lehrman, deputy home editor for Consumer Reports says: “You can be pretty confident in the water coming out of your tap.” Over 90% of U.S. water systems meet all regulations by the Environmental Protection Agency. A perfect system it’s not, but at least they have rules, and they check so you can check. Now, what’s in those plastic bottles? It’s marginally checked, but mostly “self-regulated,” which leaves the poor consumer to decide who we distrust more: the government, or “BlueGoldSprings” – which may be a division of the billion dollar Platinum Mining Corporation that also sells neutron septic tanks.

*What is in those bottles? Despite the fancy slogans involving “glacial sand” and angelic mountaintops almost half the stuff comes from … local municipal supplies; the same place your faucet gets it! Forty per cent of those mega-water-bottle people you see biking, jogging, and turning themselves into pretzels could stop shlepping and sip from a fountain. More, many bottled water companies have been oddly effective at keeping their contents a mystical secret from well, us and the government. Mr. Wizard told us bacteria can grow in bottles, especially if the bottle has been sitting there since Shavuot, 2012. Do we know dates? Unlike tap suppliers, bottlers can hide, then shred test results or violations after two years; altogether a terrific idea for the IRS instead of H2O.

*What are those bottles? Many are made of polyethylene terephthalate. If it sounds scary, it is. They may or may not leach stuff that causes cancer, and neurological problems in children. This is going to make me glow? Maybe my X-Ray.

Gelt leaking: Is there an accountant in the house? Tap water costs less than 1 cent per gallon, while bottled water adds up to about $8 per gallon. A Yiddishe kop should pay for exactly the same shmutz we can tap? Or, as our mamas used to say “Why buy the cow, if you can get the milk for (practically) free?”

*Garbage, garbage everywhere! Bottled water produces up to 1.5 million tons of plastic trash per year. According to Food and Water Watch, that plastic requires up to 47 million gallons of oil to produce. Instead of recycling, over 80 percent are simply thrown away, spinning in the world's oceans and landfills for up to 1,000 years, leaking toxic waste and killing marine life.

Similarities Between COVID-19 and Jewish Mothers-in-Law

Did Jew Know?
Scientific Curiosity and the Divine Encounter
Mind Over Milkshakes
Love the Convert
Comments
MOST POPULAR IN Jewlarious
Our privacy policy
Aish.com Is Looking for Great Writers