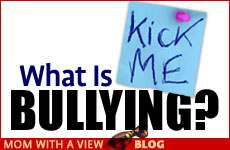 If every act of cruelty is bullying, then the word loses all meaning.

There were a lot of responses to last week’s column – many of them negative. I would like to try to clear the air and re-explain my position – in the interests of clarity and not necessarily with any expectation of more positive responses!

Many readers pointed out that the “Kick Me” sign was…well…not nice. I agree. I didn’t say it was a positive action. I think I suggested that it didn’t reflect a highly developed sensitivity to the needs of others (to paraphrase). It’s not good character, nor is that type of behavior permitted under Jewish law. I didn’t advocate those pranks. I just raised the issue that perhaps it didn’t fit within the definition of bullying, that perhaps by including a one-time action like this in their zero tolerance policy, the New York City school system has diminished what bullying means rather than enhanced it.

One reader was vehement: Clearly you have never been bullied nor had a child who had been bullied, or you would NEVER have written this article!

You are right that, thank God, I haven’t. But I think you are mistaken in assuming that this is clear from the piece. You believe that if I or my child had been bullied, we would welcome this policy and advocate the boy’s suspension. That simply isn’t true. In fact, particularly if my child had experienced bullying – the day in-day out trauma of emotional and/or physical abuse that damaged their self-confidence, made them dread going to school and, at its worst, led to self-destructive behaviors – I would be even more adamant about my position. I would feel even more strongly that the one-time occurrence of posting a mean sign on a child’s back bore no resemblance whatsoever to real and serious bullying.

If rules are applied too broadly, they become ineffectual and void of purpose.

I would be outraged to include that child in the same category as mine. I would feel that this decision trivialized my child’s experience, not the opposite. If every act of cruelty is bullying, then the word loses all meaning. If rules are applied too broadly, they become ineffectual and void of purpose.

I can’t recall the exact details but I have a vague memory of hearing a news story about a boy who went camping with his parents over the weekend, Swiss army knife in his backpack. He forgot to remove it before going to school the following Monday and was suspended for violating the school’s zero tolerance policy on weapons.

But the boy wasn’t violent. He didn’t have a nefarious purpose. His real crime was a memory lapse. To lump him with the perpetrators of the Columbine Massacre is absurd. It makes everyone look foolish and distracts from the serious issues at stake.

So let me state it clearly for the record. I am NOT in favor of cruelty or meanness, of hurtful pranks or of jokes at someone else’s expense. I’m just saying that one-time non-violent act doesn’t usually fit the criteria of bullying.

We lose perspective when our children are involved. We let our emotions rule. We almost can’t help it; it’s in the hard-wiring. But a more hard-headed approach would, I think, demonstrate that if everything is bullying, then, in the end, nothing is. And that a thoughtful, narrowly applied policy accomplishes more than a broad catch-all system ever will.

My House Feels Like a 24-Hour Diner and I Love It
Do You Like Slow-Cooked Food? Thank the Jews
Ashkenazi Style Cholent Recipe
Were Adam and Eve Jewish?
Comments